“Things were so bad that the Secret Service recommended the president go down to the bunker," Barr tells Fox News 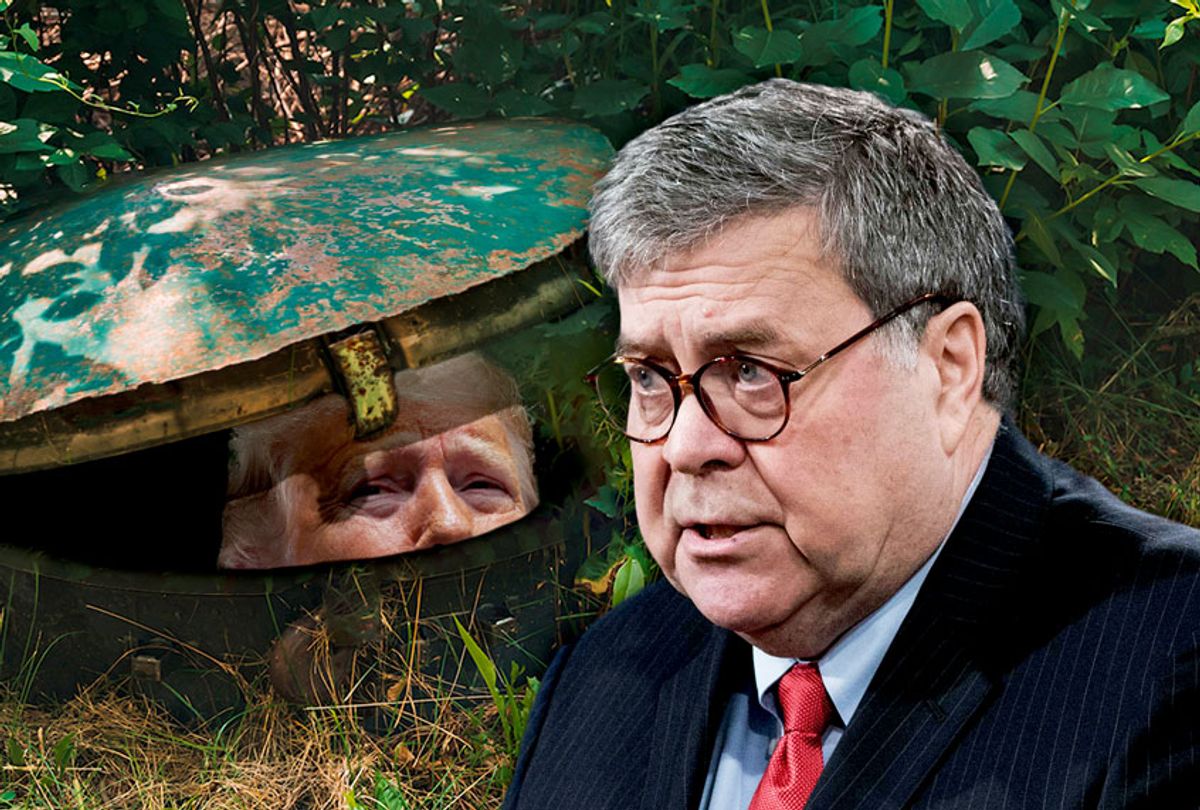 William Barr and Donald Trump, peeking out of the bunker (Photo illustration by Salon/Getty Images)
--

Attorney General William Barr undercut President Donald Trump's dubious claim that his trip to the White House bunker amid protests was just an "inspection" as he sought to spin his own order to clear peaceful protesters from Lafayette Park to pave the way for his boss' photo-op in front of a fire-damaged church.

The New York Times and other outlets reported that Trump, first lady Melania Trump and their son Barron were taken to the underground bunker by Secret Service for about an hour as protesters clashed with authorities May 29 outside of the White House. Trump later claimed that he was only there for a daytime "inspection" even though the Secret Service raised the alarm after protesters breached a barricade, which The Washington Post confirmed with arrest records and official sources.

Barr directly undercut Trump's falsehood in a Monday interview with Fox News as he attempted to claim that the protesters he ordered to be cleared were not peaceful despite ample evidence that they were.

"We were reacting to three days of extremely violent demonstrations right across from the White House. A lot of injuries to police officers, arson," Barr said. "Things were so bad that the Secret Service recommended the president go down to the bunker. We can't have that in our country."

The comments came after Trump told "Fox & Friends" host Brian Kilmeade that it was just a routine "inspection."

"I went down during the day, and I was there for a tiny little short period of time, and it was much more for an inspection. There was no problem during the day," he said last week. "They said it would be a good time to go down and take a look, because maybe sometime you're going to need it. I looked at it. It was during the day. It was not a problem . . . There was never a problem."

While it is true that protesters threw objects and clashed with authorities around the White House last weekend, there is no evidence suggesting any violence at the protests before federal forces fired tear gas and rubber bullets to clear the area for Trump's photo-op in advance of the city's 7 p.m. curfew.

"The D.C. National Guard member spoke to Attorney General Barr, who was in charge, and explained that the crowd was peaceful — but troops from federal agencies, including the Federal Bureau of Prisons, remained," Rep. Eleanor Holmes Norton said in a statement. "Three warnings were given, but the peaceful crowd was too large for most to hear the warnings.  The sudden use of smoke and pepper balls caused pandemonium."

Barr has also attempted to counter reports that he ordered the protesters to be cleared, even though White House press secretary Kayleigh McEnany confirmed to reporters that he gave the order. Barr argued that he had simply urged authorities to do it, though did not actually say "go do it."

"I'm not involved in giving tactical commands like that," Barr told the Associated Press. "I was frustrated ,and I was also worried that as the crowd grew, it was going to be harder and harder to do. So my attitude was get it done, but I didn't say, 'Go do it.'"

The news coverage of his trip to the bunker angered Trump, and first daughter Ivanka Trump urged him to stage the photo-op in front of St. John's Church, according to The Times. The stunt turned out disastrous, drawing public rebukes from evangelical leaders, Republicans and even former Defense Secretary James Mattis.

"Never did I dream that troops taking that same oath would be ordered under any circumstance to violate the constitutional rights of their fellow citizens," Mattis said, "much less to provide a bizarre photo op for the elected commander-in-chief, with military leadership standing alongside."

Barr on Monday defended Trump's visit to the church but would not say whether he thought it was a good idea to take a photo with a Bible which Ivanka Trump carried in her $1,540 MaxMara bag surrounded by all-white officials in the middle of a protest against police racism.

"That was a decision for the White House and the president," he said. "I don't sit as a critic of these kinds of leadership decisions made at the White House."