Despite claims made by Trump and Barr, arrest records show no evidence of Antifa in protest violence 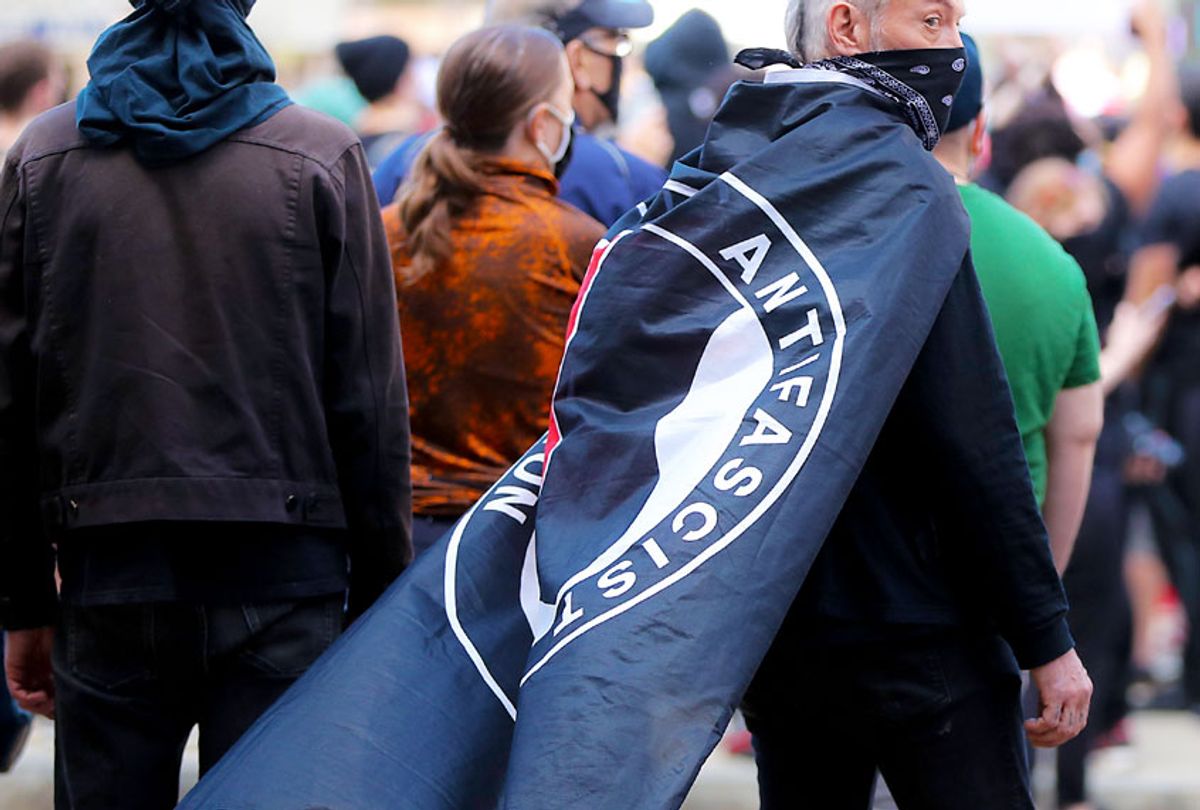 Protester with an ANTIFA flag draped over his shoulders during a rally (Matthew J. Lee/The Boston Globe via Getty Images)
--

President Donald Trump and Attorney General William Barr blamed violence surrounding some protests over the police killing of George Floyd on "Antifa," but charges brought by the Department of Justice show no signs of involvement by anyone affiliated with the anti-fascist movement.

Trump blamed protest violence on "Antifa and the Radical Left," while Barr claimed to have evidence that "Antifa and other similar extremist groups . . . have been involved in instigating and participating in the violent activity."

But a Reuters review of federal court records related to charges brought by the Justice Department and social media posts by suspects "found mostly disorganized acts of violence by people who have few obvious connections to Antifa or other left-wing groups."

Barr vowed to prosecute violent offenders under federal terrorism statutes, but the 53 individuals charged by the DOJ thus far suggest no links to outside groups, and in some cases, show no violent acts at all.

The Associated Press also reviewed the cases of 217 people arrested last weekend in Minneapolis and Washington, similarly finding "scant evidence" of any Antifa supporters or outside agitators, as some local officials have claimed.

More than 85% of those arrested were local residents, and "of those charged with such offenses as curfew violations, rioting and failure to obey law enforcement, only a handful appeared to have any affiliation with organized groups," the outlet reported. "Those charged with more serious offenses related to looting and property destruction — such as arson, burglary and theft — often had past criminal records. But they, too, were overwhelmingly local residents taking advantage of the chaos."

The Justice Department did not comment on the reports, but Barr on Monday claimed that the department was still in the "initial phase of identifying people."

"It is possible that more evidence could emerge as the cases progress," Reuters reported, but noted that the term "Antifa" does "not appear in any of the federal charging documents."

The only group that is referenced by name is the so-called "boogaloo" movement, whose followers have called for sparking a second Civil War. Three white men with military experience tied to the right-wing extremist movement plotted terrorist attacks in hopes of sparking mass unrest, federal prosecutors said in a criminal complaint. They were allegedly found with Molotov cocktails and explosives near a protest in Las Vegas.

Some suspects whose charges were reviewed by Reuters told police they had extreme political views but did not say they were part of any group.

An 18-year-old Massachusetts man charged with possession of a Molotov cocktail told police he was "with the anarchist group," according to a police report. Federal prosecutors told Reuters they have "no additional information on what that meant."

A man arrested for allegedly destroying a police vehicle in Pennsylvania said he was "far-left" and lashed out in a "f*ck-it moment." A Texas man charged with brandishing an assault rifle made statements calling for Trump to "die" and posted social media messages targeting his supporters.

Of the suspects whose social media was reviewed by Reuters, 17 "espoused violence" or used encrypted communications.

Michael German, a former FBI agent who now works at the Brennan Center for Justice at New York University, told the outlet it was possible the government could show evidence of group links at trial. But the "lack of clear indications of involvement of anti-fascists in these protests, I think, shows they are not leading in any way the protest violence."

Despite any clear links to Antifa, Trump has vowed to designate it as a "terrorist group" even though he lacks the power to do so. Aside from constitutional constraints, Antifa is not a group but rather a decentralized political movement made up of many autonomous groups and individuals.

Barr described Antifa as a "very loosely organized group" with a "sort of unique or unusual system of communication and organization."

"There are people who could be characterized as leaders in any given situation," he argued.

FBI Director Chris Wray testified to Congress that the bureau considers Antifa "more of an ideology than an organization," adding that the FBI does not investigate ideology.

And the FBI has found little evidence of Antifa involvement, according to documents issued by the bureau, the Department of Homeland Security and the National Counterrorism Center.

"Based upon current information, we assess the greatest threat of lethal violence continues to emanate from lone offenders with racially or ethnically motivated violent extremist ideologies and [domestic violent extremists] with personalized ideologies," an intelligence bulletin obtained by ABC News said.

"We lack detailed reporting indicating the level of organization and planning by some violent opportunists and assess that most of the violence to date has been loosely organized on a level seen with previous widespread outbreaks of violence at lawful protests," an intelligence notice obtained by the AP said.

An FBI situation report obtained by The Nation said it had "no intelligence indicating Antifa involvement/presence," at least surrounding protests in Washington. But it warned that a far-right group had "called for far-right provocateurs to attack federal agents" and "use automatic weapons against protesters."

"Typically, when we're talking about Antifa, which doesn't exist as a group in the way the president imagines, it would make it difficult to associate somebody with a group that doesn't exist as an organization," German told The Daily Beast. "They're imagining something that isn't real. It'll be hard for an agent focused on facts to list it."