Fox hosts dismiss calls for "Paw Patrol" to be canceled: “What the left wants is to destroy America"

"When Paw Patrol starts getting criticized, you know that this is in the land of extremism," Stuart Varney says 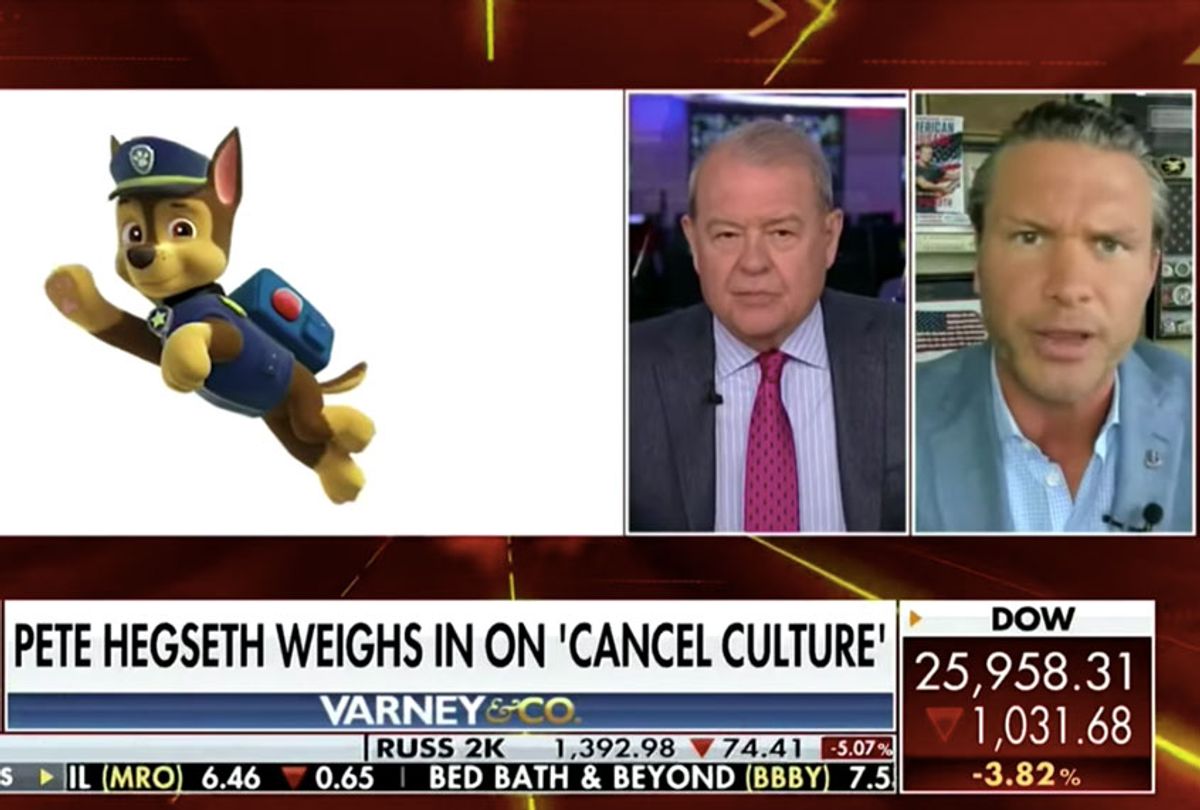 Fox News host Pete Hegseth suggested on Thursday that a move to rename Confederate military bases would teach children not to "love America."

While appearing on Stuart Varney's Fox Business program, Hegseth was asked about a New York Times report that the cartoon Paw Patrol could be cancelled over it's depiction of "good cops."

Varney argued that the so-called "cancel culture" is a threat to free speech.

"It's worse than that," Hegseth opined. "This is the logical extent of the left. Unfortunately, I wrote a whole book about it called 'American Crusade' and it's happening faster than anyone thought."

"It all starts with America is an evil place," he complained. "America is a bad place, it was stolen from Native Americans and built on the black — on the back of slaves and as a result, everything that has been done in our country is considered a sin and an evil and you must erase it all."

Hegseth admitted "America is a flawed place," but he insisted that history should be glossed over by government schools.

"What the left wants is to destroy America," Hegseth remarked. "So you go at the symbols. One of the most recent symbols of course is the police. Paw Patrol, I've watched more hours of Paw Patrol, Stuart, than I can imagine."

"Me too!" Varney chimed in.

"Even a subtle reminder that police are good people, to the left, is a residue of racism," Hegseth continued. "Therefore, it must all be undone. That's how you end up with autonomous regions in Seattle where the first thing they do, of course, is bring armed guards and build a wall and check IDs so people can come in."

"Look, when does this stop?" Varney demanded to know. "Who is going to stand up and say enough is enough. When Paw Patrol starts getting criticized, you know that this is in the land of extremism."

"We must have free speech!" he exclaimed. "Who is standing up for free speech?"

"Thank God we have President Trump right now," Hegseth said. "Where does it stop? I don't know, Stuart. It's individual citizens mustering courage to stand up against the mob, following the lead of our president."

Hegseth added: "But we're at a really, really bad spot because our corporations are captured, social media is captured, our education system. What we're teaching kids in government schools today is the sins of America. And when you do that, you get people that don't love the country that they're supposed to defend."

Before concluding, Varney tied the call to remove Confederate names from military bases to the criticism of Paw Patrol.

"The reality is erasing your history doesn't make it any better," Hegseth replied. "The only way you learn from it is from understanding what happened, why it happened, how we change in moving forward. Of course, the reason for renaming bases after Confederate generals was part of rebuilding our nation and creating solidarity after a Civil War that was incredibly bloody."

Hegseth then seemed to contradict his early point in which he opposed teaching the "sins of America" in public schools.

"By teaching about the Civil War that we had, about what it took to free the slaves, we are educating the next generation about what America has had to go through to get to a place where we're the most free, most tolerant, most diverse, most prosperous country in human history."