“Go back to your bunker”: Mayor rejects Trump threat to invade Seattle over peaceful “cop-free” zone 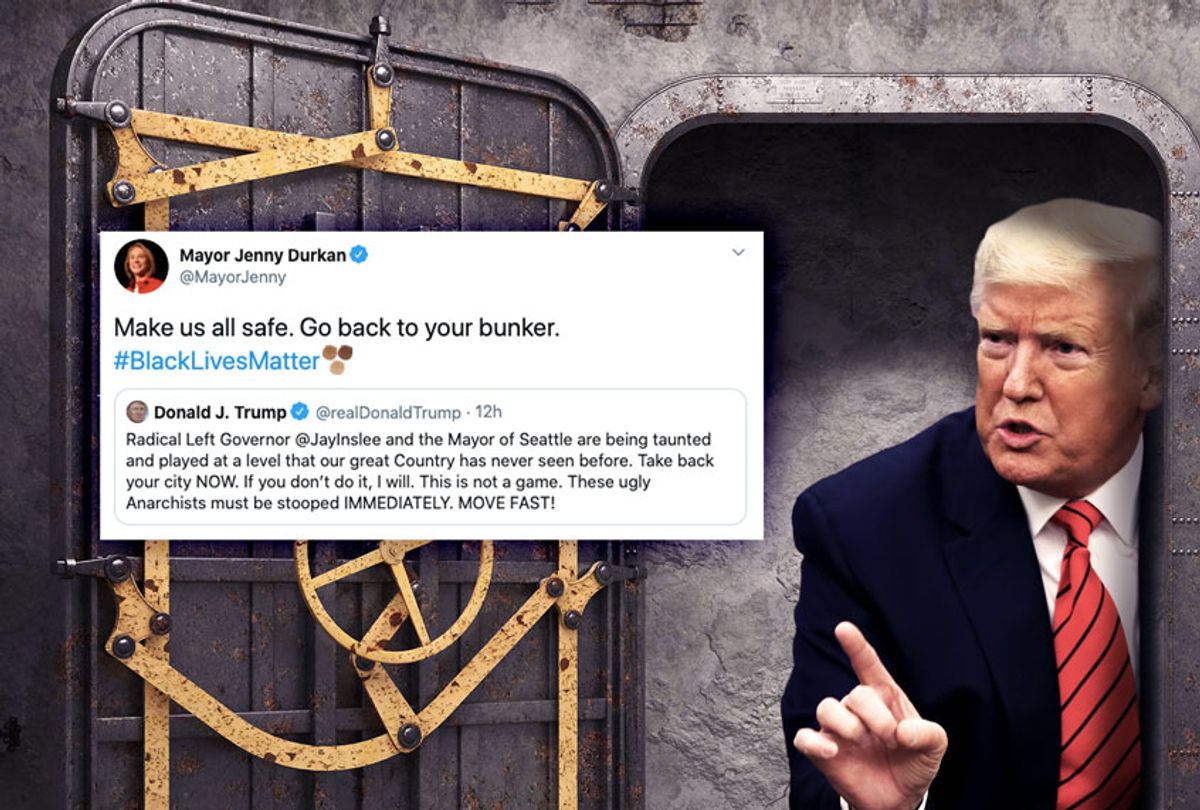 Washington Gov. Jay Inslee and Seattle Mayor Jenny Durkan, both Democrats, mocked President Donald Trump over his threat to invade the state's most populous city after protesters set up a "cop-free" zone around Capitol Hill.

Peaceful protesters created a six-block "Capitol Hill Autonomous Zone" after the city's police department abandoned their precinct in an effort to de-escalate tensions prompted by officers' use of tear gas on demonstrators, which was temporarily banned by Durkan. Protesters in the "cop-free zone" have brought art and books to the area, and demonstrators have also held concerts and movie nights.

But as Seattle moved to ease tensions after weeks of protests, Trump threatened to send in federal forces to "take back" the city amid numerous threats to sic the military on peaceful protesters.

"Radical Left Governor @JayInslee and the Mayor of Seattle are being taunted and played at a level that our great Country has never seen before," Trump tweeted. "Take back your city NOW. If you don't do it, I will. This is not a game. These ugly Anarchists must be stooped [sic] IMMEDIATELY. MOVE FAST!"

But Inslee and Durkan, both Democrats, did not seem overly concerned about the protesters or Trump's threat.

"A man who is totally incapable of governing should stay out of Washington state's business. 'Stoop' tweeting," wrote Inslee, mocking the president's typo.

"Make us all safe. Go back to your bunker," Durkan tweeted, adding a #BlackLivesMatter hashtag.

Trump has repeatedly threatened to send federal forces into the streets amid a protest movement which has drastically grown in support in the weeks since George Floyd died in Minneapolis police custody. The Black Lives Matter movement now has far more support than Trump, according to recent polls. Over the past two weeks, "American voters' support for the Black Lives Matter movement increased almost as much as it had in the preceding two years," The New York Times reported.

Trump's threats, meanwhile, have been met with public criticism from former Secretary of Defense James Mattis and other military officials. They have also condemned the Trump administration's decision to tear gas peaceful protesters near the White House so Trump could stage a photo-op in front of a nearby fire-damaged church. General Mark Milley, the chairman of the Joint Chiefs of Staff, apologized Thursday for his appearance at the photo-op.

"I should not have been there," Milley said. "My presence in that moment and in that environment created a perception of the military involved in domestic politics."

Hundreds of protesters marched Tuesday into Seattle's City Hall, where they were allowed in by city council member Kshama Sawant. The police did not record any arrests, and the crowd ultimately dispersed.

Protesters in the "Autonomous Zone" have been peaceful, and Seattle officials say there have been no links to Antifa or "anarchists," as the president suggested.

"City officials have not interacted with 'armed Antifa militants' at this site," a Durkan spokesperson told CNN.

"This space is now property of the Seattle people," the front door of the police precinct now says.

"What has emerged is an experiment in life without the police — part street festival, part commune. Hundreds have gathered to hear speeches, poetry and music," The New York Times reported. "On Tuesday night, dozens of people sat in the middle of an intersection to watch '13th,' the Ava DuVernay film about the criminal justice system's impact on African-Americans. On Wednesday, children made chalk drawings in the middle of the street."

The protesters have been allowed to continue to occupy the area. Seattle Fire Chief Harold Scoggins met with protesters Wednesday in the zone, where he helped set up a discussion with the police department and ensure that the area had portable toilets and sanitation.

"I have no idea where we're headed," Scoggins told The Times. "We've been working step-by-step on how to build a relationship, build trust in small things, so we can figure this out together."

Protesters have demanded that the city defund the police department, fund community health programs and drop all criminal charges against protesters, among other demands.

There have not been any reports of problems stemming from the encampment, which reporters have said was "very peaceful."

"Really a whole different vibe than I'd seen the other nights I've been there, a very peaceful experience, almost like a street fair honestly," Hanna Scott, a reporter at local news outlet KIRO Radio, said. "Their position is that they can take care of themselves."