“My whole thing was to protect those people," the wounded victim said as he was being treated by medics 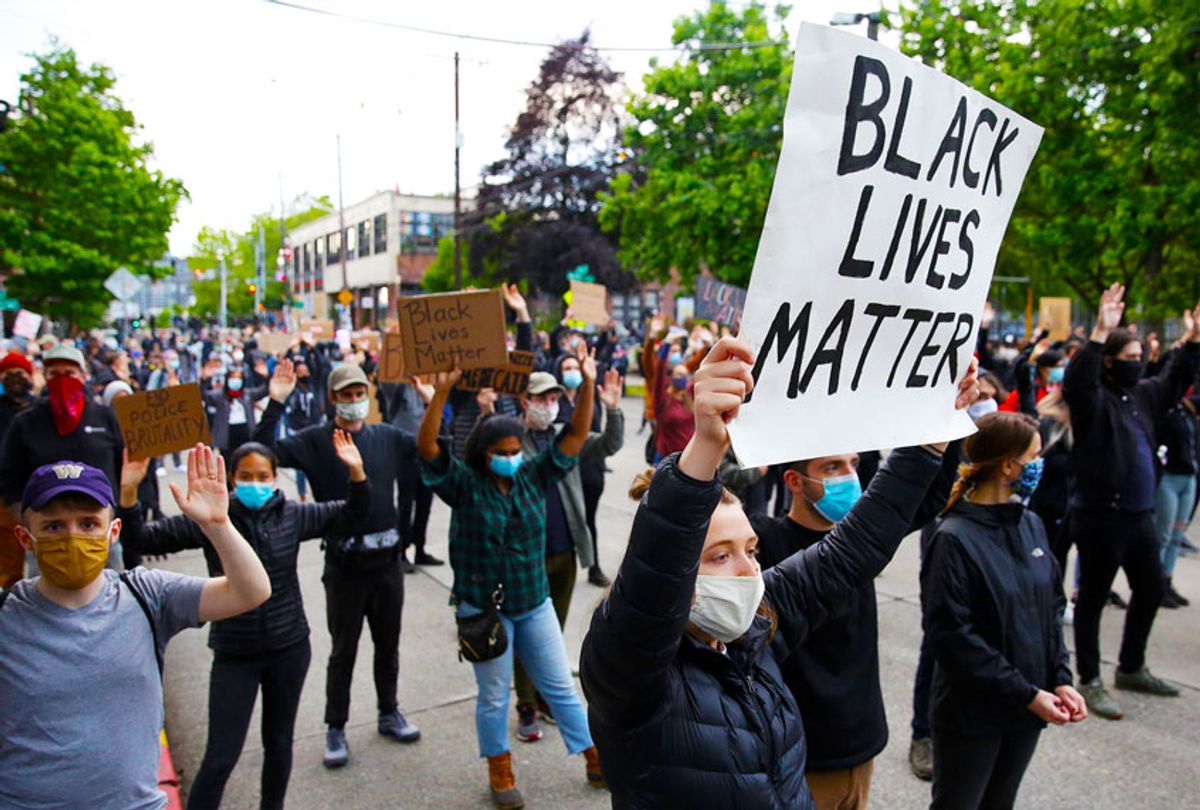 People hold up placards to protest over the death of George Floyd, outside the Seattle Police Department's East Precinct in Seattle, Washington (JASON REDMOND/AFP via Getty Images)
--

Seattle police said a man was taken into custody on Sunday after driving into a crowd protesting the death of George Floyd and shooting a 27-year-old black man. The incident was caught on video.

The footage shows protesters scatter and try to block a black sedan as it speeds down the street. Protesters then swarm the vehicle before the driver apparently opens fire, wounding a man who seemingly tried to reach into the window.

Medics quickly tend to the injured protester as the driver exits the car and brandishes the firearm. The driver then retreats through a crowd of protesters.

Another video shows the man running to police, who peacefully took him into custody.

"I catch up, I hit him in the face, I hear the gunshot go off," Daniel said in a video as he was being led away by medics. "My whole thing was to protect those people."

Police said the suspect is now in custody. Daniel was taken to Harborview Medical Center, where he is listed in stable condition.

Seattle Police Chief Carmen Best told MSNBC on Monday that it did "not appear that this was random or accidental."

Protesters around the country have been targeted by vehicles in scenes reminiscent of the deadly Charlottesville attack which killed Heather Heyer. Protesters in New York had to escape drivers, as well as police vehicles amid demonstrations. A truck driver was arrested for driving into protesters in Minneapolis. There were similar attacks in Boston, Denver, Los Angeles, San Jose, Tallahassee, and Tulsa. A man arrested for driving his truck into a crowd of protesters in Virginia was identified by a prosecutor as the head of the state's Ku Klux Klan.

Durkan said during an earlier news conference that police would be prohibited from using tear gas for 30 days and apologized for the use of force against protesters.

"Use of force must be rare, it must be necessary and it must be proportional," she said Friday. "I know that safety was shattered for many by the images, sound and gas more fitting of a war zone, and for that, I'm sorry."

More than two dozen lawmakers sent a letter to Durkan on Sunday calling for her to "end the damage" the police department "has caused by overreaction to mostly peaceful protests." The letter accused police of inflicting "emotional trauma and extraordinary racial aggression."

Among the protesters hit with tear gas was City Councilwoman Kshama Sawant.

"Just got maced and gassed with hundreds others by Seattle police on 11th & Pine. With no provocation. All the movement was demanding was: Let us march!" she tweeted. "Shameful violence under Mayor Durkan. And the 30-day tear gas pause is totally meaningless. Durkan Must Go."