As Bill de Blasio defends cops after vehicle runs into crowd, his daughter is arrested at a protest

"Running SUVs in crowds of people should never, ever be normalized," Rep. Alexandria Ocasio-Cortez says in response 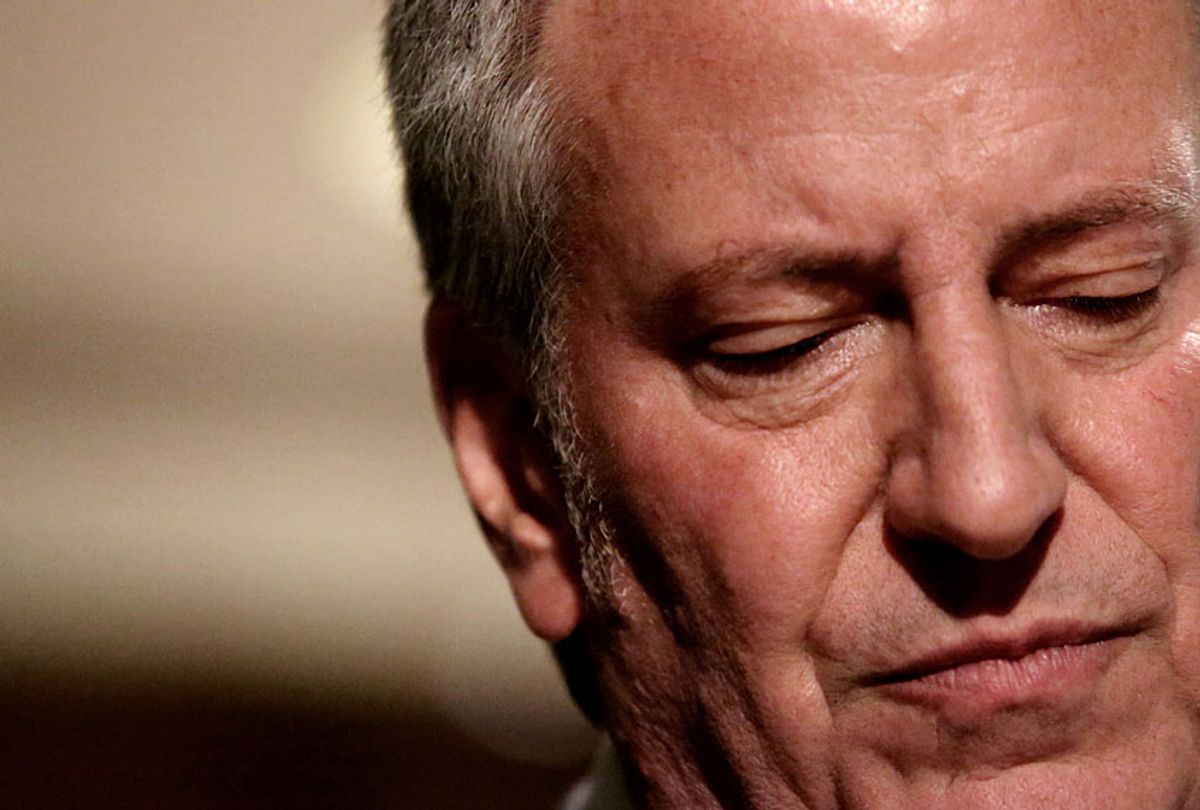 New York Mayor Bill de Blasio's daughter was among the hundreds of people arrested over the weekend amid protests over the death of George Floyd in Minneapolis.

Chiara de Blasio was one of 345 protesters arrested on Saturday, WABC reported. Nearly 800 protesters have been arrested in the city since Friday.

The 25-year-old was charged with unlawful assembly for allegedly defying police orders to move after blocking traffic at 12th Street and Broadway in Lower Manhattan, according to the New York Post.

"That was a real hotspot. Police cars were getting burned there. People were throwing and yelling — fighting with cops," a law enforcement source told The Post. "There were thousands of people in that area at that time."

"If you went out peacefully to make a point about the need for change, you have been heard and change is coming in the city," he said during a press conference late Saturday night. "I have no doubt about that. It's time to go home so we can all move forward."

A day later, de Blasio blamed agitators with an "explicit agenda of violence" for violence and vandalism during the protests.

"It is a small number of people. It is well organized, even though many of the people are associated with the anarchist movement," he said Sunday. "Some come from outside of the cities. Some are from inside the city. Some are from the neighborhoods where the protests take place. Some are not."

But de Blasio came under fire Sunday after he defended police officers who drove vehicles into a crowd of protesters. The moment, which was caught on camera, recalled images of the deadly car attack on protesters in Charlottesville.

The video showed protesters gathering around a police vehicle parked in the middle of the street when a second vehicle drives into a large group. A law enforcement source later told WABC that the officer hit the gas after realizing there was a flaming bag on top of the car.

But de Blasio insisted that police "acted appropriately" when questioned about violent images from the protests. He said the officers in the video were in an "impossible situation," because they were being surrounded. There did not appear to be protesters behind the vehicles.

"Imagine what it would be like — you're just trying to do your job, and then you see hundreds of people converging on you. I'm not going to blame officers who were trying to deal with an absolutely impossible situation," de Blasio said. "The folks who were converging did the wrong thing to begin with, and they created an untenable situation. I wish the officers had found a different approach, but let's begin at the beginning. The protesters in that video did the wrong thing to surround that police car — period."

Along with the video of cops driving into protesters, NYPD officers were seen throwing a woman to the ground, causing severe injuries.

Another video appeared to show an officer pull down a protester's mask before pepper-spraying him.

Another video appeared to show an officer intentionally open a car door to slam a protester in the street while driving by.

New York state lawmakers Diana Richardson and Zellnor Myrie, who are both black, said they were pepper-sprayed and handcuffed by police at the protest.

New York was just one protest site where such tactics were used to shut down largely peaceful protests which were marred by instances of violence blamed by leaders on outside groups.

But de Blasio's response in defense of the officers drew unusual criticism from members of his own party.

"@NYCMayor your comments tonight were unacceptable," Rep. Alexandria Ocasio-Cortez wrote. "As mayor, this police department is under your leadership. This moment demands leadership & accountability from each of us. Defending and making excuses for NYPD running SUVs into crowds was wrong. Make it right. De-escalate."

"Running SUVs in crowds of people should never, ever be normalized," she added. "No matter who does it, no matter why."

Some former de Blasio advisers were also dismayed with his response.

"This is not what we campaigned on in 2013," Rebecca Katz, one of de Blasio's top former advisers, said.

"He must hold the NYPD accountable for their actions," she wrote on Twitter. "No more false promises."

"I think he's living in an alternative universe at this moment in history," New York City Councilman Donovan Richards, who chairs the Public Safety Committee, told Politico. "It's disheartening, because there are a lot of folks who believed in his message. They see these statements and they just say, 'What the hell?'"

Intercept columnist Mehdi Hasan called for the mayor to resign in response to his statement on the heels of countless mistakes that led to New York becoming the epicenter of the new coronavirus outbreak.

"He should resign because his comments on Saturday night were brazen and disgusting lies," he wrote. "It is clear that neither police car was surrounded; both drivers could have reversed but chose instead to plough their vehicles into the crowd of people in front of them. So who should we believe? De Blasio or our own lying eyes?"