In defense of the Capitol Hill Autonomous Zone: The noble history of a utopian idea 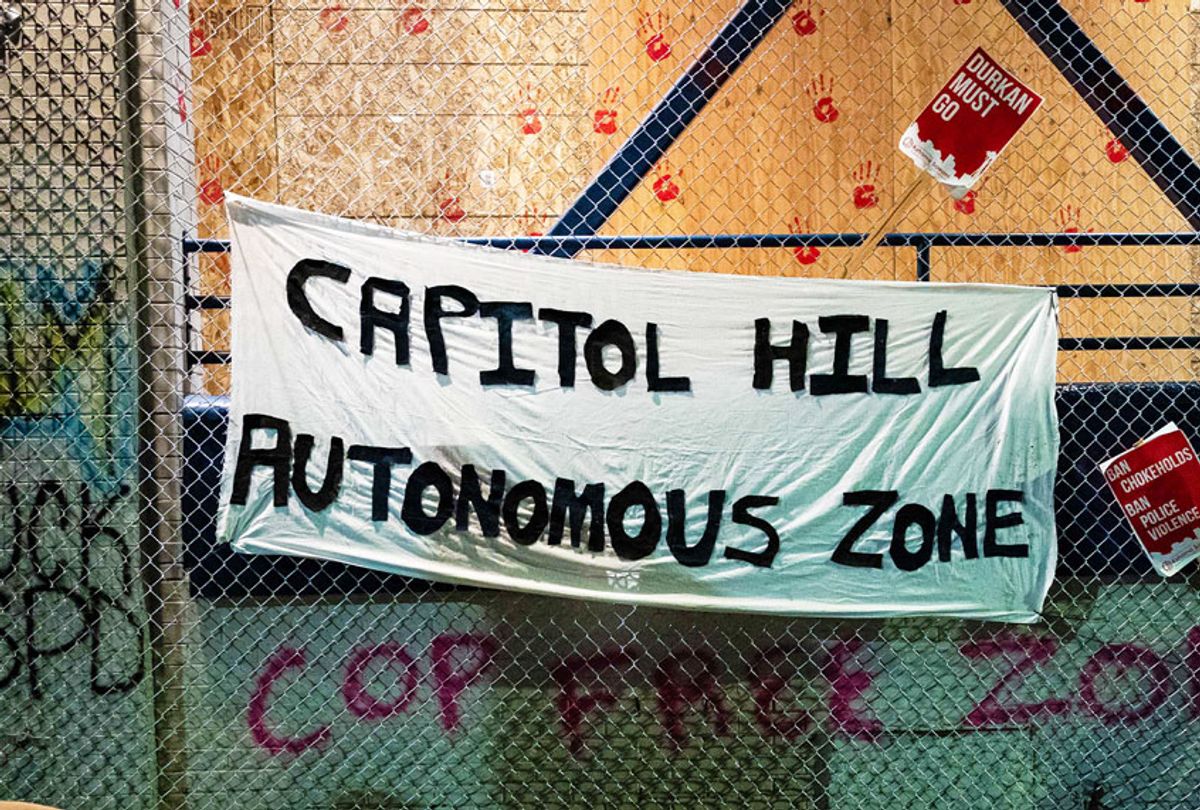 Based on President Donald Trump's recent Twitter tirades against the Capitol Hill Autonomous Zone in Seattle — a self-declared, twelve-block commune claiming to operate beyond United States jurisdiction — one might be forgiven for thinking that the concept of "autonomous zones" is inherently inane.

The president put the Seattle chapter of the George Floyd protests in the spotlight when he tweeted Thursday that "Radical Left Governor [J]ay Inslee and the Mayor of Seattle are being taunted and played at a level that our great Country has never seen before. Take back your city NOW. If you don't do it, I will. This is not a game. These ugly Anarchists must be stooped [sic] IMMEDIATELY. MOVE FAST!"

Inslee, who in previous interviews with Salon focused on the importance of using science when developing policies on important issues like climate change, responded with a tweet mocking Trump's typo and drawing attention to his multiple failures addressing the coronavirus pandemic.

"A man who is totally incapable of governing should stay out of Washington state's business," Inslee wrote. "'Stoop' tweeting."

Meanwhile, Seattle Mayor Jenny Durkan told Trump to "Make us all safe. Go back to your bunker," before adding a #BlackLivesMatter hashtag.

Although Trump has suggested that the autonomous zone is somehow connected to professional anarchists or Antifa, neither of those statements are backed by evidence. Yet the mere concept of the autonomous zone has clearly gotten conservatives besides Trump in a tizzy. David Marcus of The Federalist wrote that the Seattle zone is going to eventually succumb to a crime problem, pointing to the claims of sexual assault that were made when Occupy Wall Street took over Zuccotti Park in 2011, and predicted that "if Seattle doesn't nip its own occupation in the bud, it is very likely these events will repeat themselves," adding "the question for Seattle's government and police is, just as it was in New York a decade ago, not if, but when they will break up the so called 'autonomous zone.'"

A senior contributor of Forbes pointed to the autonomous zone as proof of a sickness in American society, mentioning, among other things, the alleged assault on citizen journalists. Fox News pundit Tucker Carlson accused the people in the zone of advocating segregation, while the news side of his network is reporting that Seattle law enforcement experts want police to take back the zone and that Seattle Assistant Chief of Police Deanna Nollette says "we've heard, anecdotally, reports of citizens and businesses being asked to pay a fee to operate within this area. This is the crime of extortion."

Regardless of whether these allegations are true, it is important to separate the political concept of the autonomous zone from reports of individual misdeeds. Conservatives' dismal perception of human nature never seems to play out in reality — as we are seeing in this pandemic, which has revealed humans are far more driven by kindness and solidarity than by self-interest and opportunism.

In any case, it is always true of any large group of people — whether an autonomous zone or a corporation or a city — that there will always be bad actors who abuse their professed ideals.

That said, the concept of the autonomous zone has a long and storied political history worldwide. There have been many historical moments in which citizens of a neighborhood, or even an entire city, rose up and declared themselves free and autonomous.

Notabe historical examples include the Paris Commune, Freetown Christiana in Copenhagen, Kowloon Walled City in Hong Kong, and arguably many of the Occupy Wall Street sites. In all these cases, geographic regions ranging in size from a single park to a city declared themselves autonomous, soon achieving various levels of self-sufficiency, community, and mutual aid networks. The utopian ideals and rhetoric borne of many of these autonomous zones permeates through our politics and culture.

We can start with the Occupy Wall Street takeover of Zuccotti Park in Manhattan in 2011. As journalist Laurie Penny wrote in The New Statesman in 2016, the enclave at Zuccotti Park created a community meant to be "a refugee camp from late stage capitalism." The people there were ordinary men and women from all walks of life, people who had been wronged by the excesses of capitalism (remember, this was during the nadir of the Great Recession) and wanted to temporarily create a world where class distinctions did not exist. The occupiers talked about student debt and medical debt, of being paid inadequate wages or struggling with homelessness They provided mutual aid, created free libraries and served up free lectures. They cooked for their residents or visitors; those in solidarity had food delivered to them from all over the world.

In the process, as Penny points out, the autonomous zone in Zuccotti Park came to symbolize something beautiful, an ideal that deserved its moment in the sun. "There is such shame involved in not coping," Penny writes. "If you can't make it, even in a recession, you are weak. You are unworthy. Possibly un-American. But telling these stories in the shadow of the big banks made the enemy very clear. And telling them with friends around you and free food from the kitchen camp made the enemy less intimidating."

Not all autonomous zones are doomed to quick collapse, as the Occupy site in Zuccotti Park did after the police broke it up. Freetown Christiana in Denmark is a notable exception. Founded in 1971 by families in the Danish capital of Copenhagen, who wanted to use part of a former military compound as a playground for their children, it quickly evolved into a place where Danes who could not afford housing in that country might live a liberated life. The residents quickly declared themselves independent of state authority, created a culture that encouraged marijuana consumption and artistic expression, and soon developed a reputation as one of the world's most famous hippie communes. Its mission statement declares: "The objective of Christiania is to create a self-governing society whereby each and every individual holds themselves responsible over the well-being of the entire community. Our society is to be economically self-sustaining and, as such, our aspiration is to be steadfast in our conviction that psychological and physical destitution can be averted."

While Christiana still exists, the dream it represented has started to wither. Tourism has diluted its communal atmosphere; the rising cost of living there has made it inaccessible to many of the poor it had once been created to help; the community treasury now answers to a board of directors instead of being managed in community meetings; and the Danish government has increasing control over the community. Yet Freetown Christiana seems to have shifted slightly from what its founders envisioned, it is still an example of an autonomous zone representing higher ideals that remains able to assert its existence without the government violently destroying it.

One can find other examples of autonomous zones going further back in history. In Hong Kong, there was Kowloon Walled City, a former Chinese military fort that became an enclave in 1898 and saw its population dramatically increase after World War II. Unlike the other autonomous zones mentioned here, Kowloon Walled City was not founded for idealistic reasons. It started out as simply a haven for impoverished Chinese refugees suffering during the Japanese occupation of Hong Kong, a place where rents were low and the absence of effective government oversight meant there were no taxes or other state-imposed inconveniences. By the late 1980s, roughly 35,000 people lived within the few blocks and more than 300 interconnected high-rise building, free of government oversight because of a legal loophole: the land technically belonged to China, while the surrounding city of Hong Kong belonged to the United Kingdom.

Kowloon Walled City had more than its fair share of problems. Much of it was controlled the Triads, a Chinese organized crime syndicate, and the living conditions were unhealthy and squalid. At the same time, many residents recall a sense of close community precisely because residents lived so close together and — free of external influences — had to rely on each other. A number of former residents later told the South China Post that the thing they missed most about the city was the friendship, with one woman commenting that "life was poor, but we were very happy." Between 1993 and 1994, however, the city was destroyed by the government and replaced by a public park.

There are many other examples of famous autonomous zones, too numerous to mention here. The Paris Commune of 1871, chronicled by Karl Marx in "The Civil War in France," was a radical socialist government that ruled Paris for two months before being broken up by the military. The workers there also fought to eliminate class distinctions. The town of New Harmony, Indiana was purchased by William Maclure and Robert Owen in 1825 as a commune devoted to education and social equality, but was dissolved in 1827. The list goes on and on.

And this brings us to the Capitol Hill Autonomous Zone. What does it stand for? What is its fate?

Many of the demands of the "collective black voices at Free Capitol Hill" are reasonable and overdue, demands that will resonate with many Americans struggling. Among these are the demands for rent control; free college; a decentralized election process; the removal of Confederate monuments; the termination of the "school-to-prison pipeline" and youth jails; the investigation of past and current cases of police brutality in Seattle and Washington (including people who were sexually harassed or abused by officers or prison guards); providing reparations to victims of police abuse of power; releasing all prisoners incarcerated for marijuana-related offenses and expunging their records; decriminalizing acts of protest; allowing prisoners to vote; requiring all police officers to turn on their body cameras and have the footage be easily available to the public; having hospitals and health care facilities employ black medical professionals for black patients; and redirecting Seattle Police Department funding to go to socialize health care, free public housing, public education and naturalization services for undocumented immigrants.

If the majority of the people in the Capitol Hill Autonomous Zone behave in a humane way, there is no reason why that movement should be discredited by a handful of bad actors, given that the bulk of what they want is morally just and logically feasible. It is almost certain that this autonomous zone, like most that came before it, will eventually be broken up. Likewise, if the people participating in this bold experiment aren't careful, it may fade into obscurity like the efforts in Paris and New York before it. At the same time, if even a fraction of these goals are accomplished, the endeavor will have been worthwhile.

These are things that Trump, and the conservatives who like him offhandedly dismiss this project, will never understand.