Yes, the racism is real: Trump thinks white-supremacist trolling is his path to re-election

It's more than a string of dumbass coincidences: Trump's campaign is a nonstop celebration of white supremacy 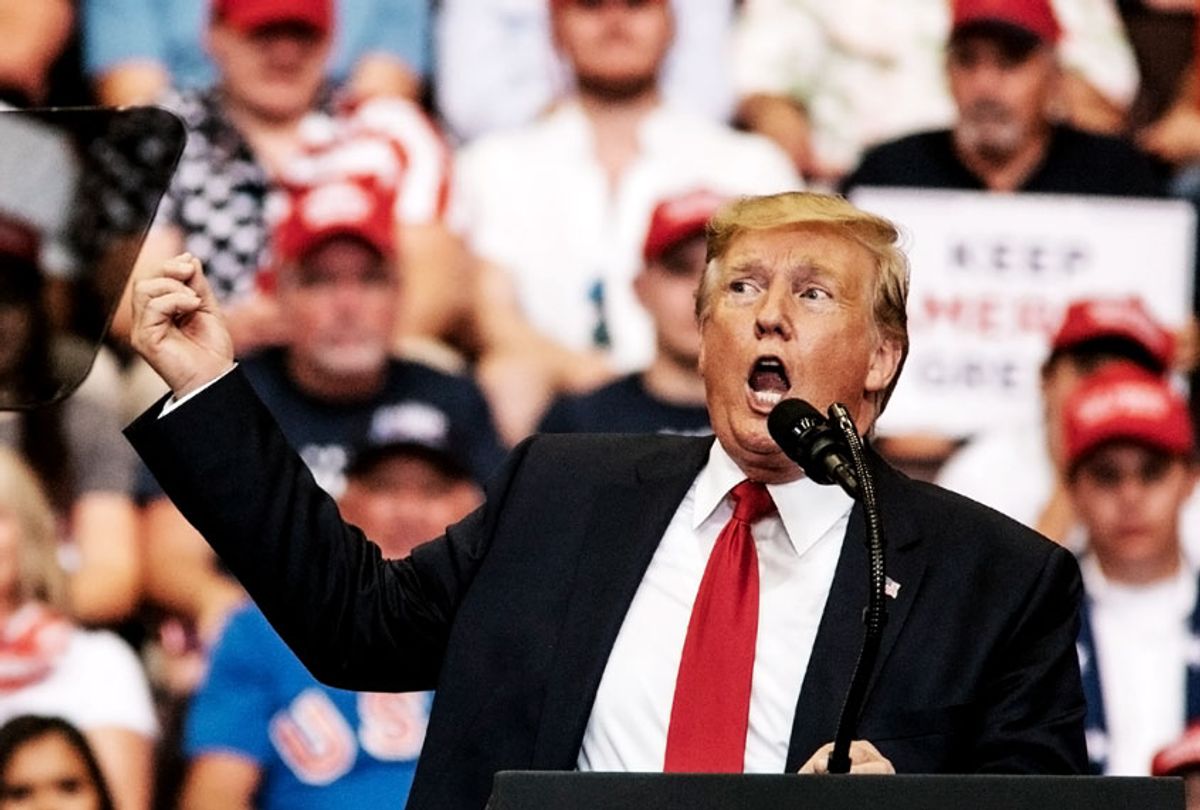 It's long past time to stop excusing Donald Trump's racist trolling as the accidental bumblings of an idiot who doesn't know better. That's not to claim Trump is a political genius — or even a person of average intelligence. But he has managed to direct the limited IQ points at his disposal towards the practice of racist trolling, and he knows what he's doing. Like anyone who focuses single-mindedly on a specific skill for decades, he has gotten good at this one thing.

This reality is critical to keep in mind when interpreting Trump's response to the rising tide of national protests against racism and police brutality in the past couple of weeks. The temptation is strong to resort to "he's too dumb to know what he's doing" argument, which might fluff one's own ego but has the unfortunate side effect of downplaying how sinister Trump's fascistic impulses actually are.

Trump announced this week that his regular rallies, which were on hiatus due to the coronavirus, would return next week, despite the very real possibility threat these will become virus super-spreader events. But that concern was overshadowed by the obnoxious racist provocation of the date and location: June 19, in Tulsa, Oklahoma.

That date is Juneteenth, a day of celebration of the end of slavery, particularly in the Oklahoma and Texas areas. Tulsa is the location of the infamous mass lynching of 1921, in which hundreds of black residents were murdered and a prosperous black neighborhood was decimated, an event recently dramatized in the HBO series "Watchmen."

Is this a coincidence? Nope. Trump may not be much of a stable genius, but he doesn't need to be the brightest bulb on the KKK Christmas tree to be a racist troll.

It's important to remember that while Trump is no one's idea of a reader, he's got Stephen Miller, a documented white nationalist with a strong interest in the history of white supremacy, as one of his closest and most trusted advisers. More to the point, the choice of location and date makes no sense at all, from a campaign point of view, unless the purpose is racist trolling.

Dan Pfeiffer, the former White House communications director under Barack Obama, certainly believes the choice was deliberate, tweeting: "The date and the location of this rally in this very specific moment in American history are too much to be a coincidence."

Pfeiffer elaborated further on Thursday's episode of "Pod Save America," noting that Oklahoma is a deep red state, not one of the numerous swing states where a campaign would typically focus the resources required to host a major rally.

More corroborating evidence: Racially provocative rallies are Trump's thing, which is why he's previously held them in El Paso, Texas, and Chicago — two cities that won't move the needle for him electorally, but which have great significance to racists, who object to the bicultural nature of the first and see the latter as a symbol of "inner-city crime."

To wipe out any lingering doubt that this is intentional, White House press secretary Kayleigh McEnany told reporters that Juneteenth was "a meaningful day to" Trump. In maximal-troll mode, McEnany tried to pretend the day was selected as outreach to black voters, instead of an overt slap in the face.

In addition, the Trump campaign has been sending out tweets making clear that they're fully aware of both the meaning of Juneteenth and the details of the Tulsa race massacre. They want people to know this is deliberate.

The troll is working as was intended, by the way. The date and time placement drew countless headlines highlighting the racially "insensitive" nature of it, an issue that overshadowed concerns about the coronavirus. The event will likely draw protests, which Trump campaign surrogates will leverage to play the victim and argue, to white America, that they're under attack from "Antifa" and "rioters" and other such loaded terms.

Trump clearly believes that the key to his re-election in November — along with massive voter suppression, of course — is to go all in on white supremacist posturing. The hysterics about "riots" and "antifa" and "THUGS" pouring out nonstop from Trump's Twitter in response to the anti-racism protests — which were largely peaceful until cops started gassing and beating people — is all about this. That's why Trump keeps waxing poetic about the National Guard cutting through protesters "like a knife cutting butter," or justifying violence against protesters by saying, "You have to dominate the streets."

But this racist strategy isn't just about the here-and-now. Trump and his campaign are deliberately rooting this authoritarian campaign message in a history of white supremacy, denouncing as anyone who objects as unpatriotic or un-American. That's why Tulsa was chosen for a Juneteenth rally, and it's why the campaign has made clear it understands the significance of both the date and the location. It also explains the campaign's other nods to white supremacist and racist history.

For instance, Trump is picking a fight over Confederate monuments and memorials, many of which are being reconsidered in light of the anti-racism protests. In particular, Trump is fighting efforts to rename military bases named for Confederate officers, resisting the idea that perhaps they should be named for people who didn't wage war against the United States in defense of slavery.

In defense of his intransigence, Trump actually tweeted, "THOSE THAT DENY THEIR HISTORY ARE DOOMED TO REPEAT IT!" Considering that the white supremacist side lost the Civil War, we can surmise what history Trump is fearful of repeating.

During Trump's Fox News interview on Thursday night, he was asked whether he knew the origins of "when the looting starts, the shooting starts," which he had gleefully tweeted out when the protests first started.

The quote came from a notorious Miami police chief in 1967, but Trump contended instead that it "comes from a very tough mayor, who might have been police commissioner at the time, but I think mayor of Philadelphia named Frank Rizzo."

It's a striking reference: Rizzo was a notorious racist who literally implored voters to "vote white" in 1978. It's not surprising that Trump thinks fondly of Rizzo. Two hours northeast in New York, Trump spent much of the 1970s battling a Justice Department investigation into his family's real estate company for racial discrimination.

All of this comes after Trump gave a bizarre speech late last month in which he veered away from his prepared remarks to muse about how Henry Ford had "good bloodlines," adding, "If you believe in that stuff, you got good blood."

What kind of stuff did Henry Ford believe? Well, he was an notorious anti-Semite who promoted the fabricated propaganda tract called "The Protocols of the Elders of Zion" and published a series called "The International Jew" in the 1920s, the same decade when Trump's beloved father was arrested during a Ku Klux Klan riot in Queens.

And, as a topper, the campaign announced that Trump will give his relocated Republican National Convention speech in Jacksonville, Florida, on Aug. 27, which happens to be the 60th anniversary of a brutal racist attack in that city known as "Ax Handle Saturday," when theKlan orchestrated a beatdown of civil rights activists by a white mob.

Could any of these things, individually, be a coincidence? Of course. But given the Trumpian pattern of demonstrably non-coincidental nods to the history of white supremacy, they're probably not.

These racist provocations work on two levels. On the first, of course, there's the obvious outreach to racists, encouraging them to take pride in the history of white supremacy and to vote for more of it.

But they also works on a secondary level, just by trolling. These racist provocations invariably cause progressives, understandably enough, to attack Trump and his supporters as racist. That creates an opportunity for the Trumpers to play the victim card, claiming that their "free speech" is being suppressed and whining that liberals are a bunch of hysterical snowflakes.

This secondary effect is about roping in conservative voters who may feel uneasy about overt racism, but who can be compelled to side with Trump against "politically correct" liberals who "overreact." These people might prefer it if prominent Republicans cloaked their racist views in polite or at least less inflammatory terms, but they're willing to stand with the racists when leftists annoy them or make them feel guilty.

That's the political strategy, at any rate, and it worked well enough in 2016, when Trump scooped up enough "I'm not a racist, but ..." voters in swing states to squeak out his infamous Electoral College victory despite losing the popular vote.

Will it work? Right now the polling suggest it won't. Increasing numbers of white Americans are actually more concerned with the problem of racism than with the "problem" of people who annoy you by talking about racism. Recent Black Lives Matter protests have had a clarifying effect, especially when the police show up to unleash brutality on nonviolent demonstrators who were protesting police brutality in the first place.

Still, there is no room for complacency. The urge to shoot the messenger remains strong in large swaths of white America, especially in rural and suburban areas of the now-legendary swing states. (It's no coincidence that Trump gave a ham-fisted shout-out to Frank Rizzo, a direct appeal to Pennsylvania voters who may be angry over the removal of a Rizzo statue in Philadelphia.) The Trump campaign is betting that at least some white voters who currently feel moved by the protests will eventually get fed up with all this talk of racism and will start blaming the protesters, rather than Trump, for making them think about it.

That doesn't mean we should stop calling out Trump for racist provocations. That may be the only way to remind exhausted voters that the source of their exhaustion is in the White House, causing so much angst with his nonstop trolling. As long as the blame for the chaos and division in America sits more on Trump than on the protesters, his bet on white supremacy will backfire. But that will require Democrats and progressives to maintain focus in the face of what will likely be months of escalating hostilities, and many more provocations from the Trump campaign and the troll in chief.