"When the looting starts, the shooting starts": The disturbing history behind Trump's racist tweet 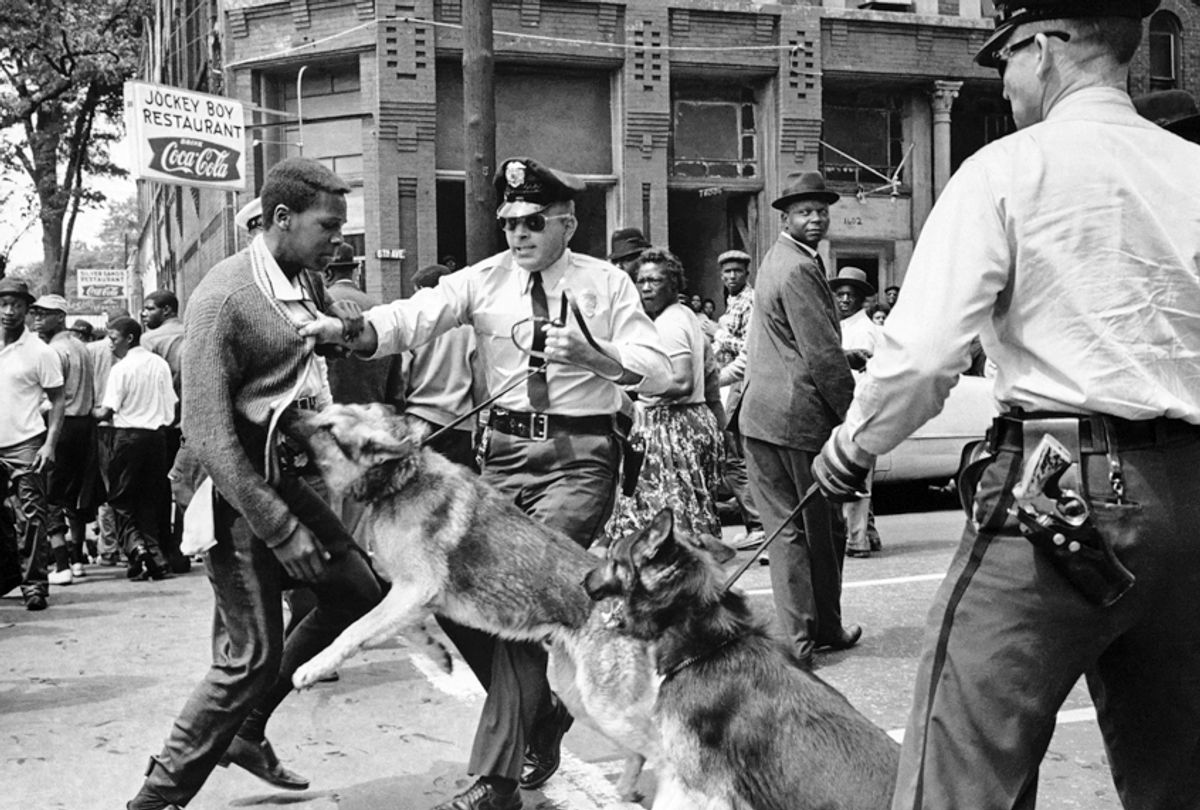 A 17-year-old civil rights demonstrator, defying an anti-parade ordinance of Birmingham, Ala., is attacked by a police dog on May 3, 1963. (AP/Bill Hudson)
--

In response to the civil unrest that Minneapolis has suffered this week following the death of George Floyd, President Donald Trump posted an inflammatory comment on Twitter: "When the looting starts, the shooting starts." It was so explosive and incendiary that Twitter, which had already triggered Trump's ire this week, flagged and hid the post as violent content.

The phrase, however, didn't originate with Trump, and its racist origins are explained in articles for HuffPost and NBC News.

Floyd, an African-American resident of Minneapolis, died on Monday while in police custody. In a disturbing video of his arrest, Floyd can be heard saying, "I can't breathe" while handcuffed and pinned to the ground. Floyd's death has inspired angry demonstrations not only in Minneapolis, but also, in other U.S. cities ranging from New York to Los Angeles to Chicago.

NBC News' Rebecca Shabad notes that according to an old article in United Press International, former Miami Police Chief Walter Headley used the phrase "when the looting starts, the shooting starts" in 1967 when discussing his department's "crackdown" on those he considered "slum hoodlums." UPI, in a Dec. 28, 1967 article, reported that the NAACP's Martin Davies was highly critical of Headley, saying, "This man has no place in a position of public trust. If necessary, we will get a lawsuit to keep him from enforcing this type of arbitrary action."

Journalist Sara Boboltz, in HuffPost, points out that more than half a century ago, the "combative" Headley used the phrase "during the height of civil rights protests in the 1960s."

"Headley led the Florida city's law enforcement from 1948 until his sudden death in 1968," Boboltz  explains. "He attracted national attention and condemnation in December 1967, when he threatened to step up already severe policing practices that included use of tear gas and an aggressive stop-and-frisk policy."

Headley was a controversial figure in law enforcement and was sometimes compared unfavorably to the late Frank Rizzo — who served as Philadelphia police commissioner in the late 1960s before serving as the city's Democratic mayor during most of the 1970s and drawing a great deal of criticism from civil rights groups. And not unlike Trump, Headley wasn't shy about saying inflammatory things. The UPI article from December 28, 1967 quotes Headley as saying, "This is war…. We don't mind being accused of police brutality. They haven't seen anything yet…. When the looting starts, the shooting starts."

In a Twitter rant on Thursday night, Trump blamed Minneapolis Mayor Jacob Frey for the unrest in Minnesota's largest city and demanded that he "get his act together and bring the City under control, or I will send in the National Guard & get the job done right."

Sounding a lot like Headley, Trump went on to say, "Just spoke to Governor Tim Walz and told him that the Military is with him all the way. Any difficulty and we will assume control but, when the looting starts, the shooting starts. Thank you!"