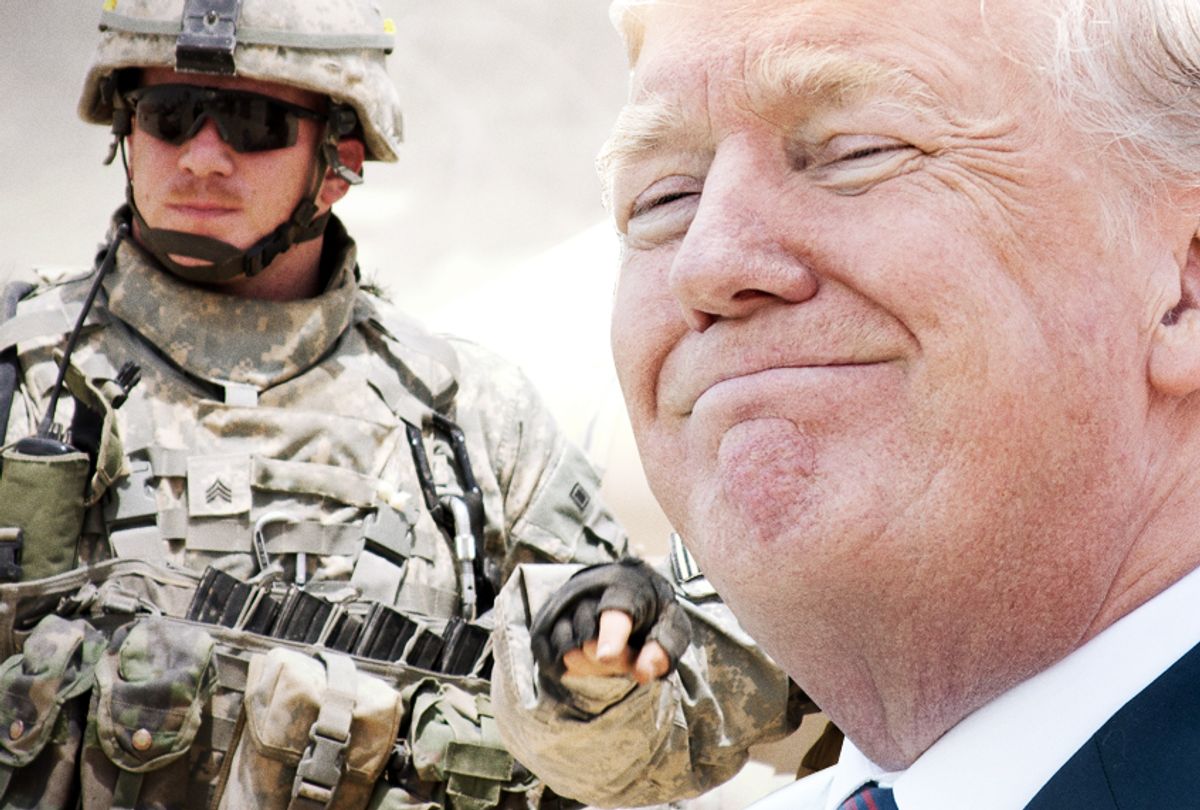 The Trump administration renewed its attacks on the International Criminal Court on Thursday with President Donald Trump issuing an executive order imposing economic sanctions against ICC staff involved in the ongoing investigations into alleged war crimes by U.S. and Israeli forces, with travel restrictions also imposed on those ICC court officials and their family members.

"President Trump is grossly abusing emergency powers to block one of the only avenues left for justice to victims of terrible American human rights violations," Hina Shamsi, director of the ACLU's National Security Project, said in response to the move. "He has repeatedly bullied international organizations, and is now playing directly into the hands of authoritarian regimes by intimidating judges and prosecutors committed to holding countries accountable for war crimes.

"Trump's sanctions order against ICC personnel and their families — some of whom could be American citizens — is a dangerous display of his contempt for human rights and those working to uphold them," said Shamsi.

The new order follows the court's March decision to greenlight an investigation into alleged war crimes committed by U.S. forces and others in Afghanistan — despite repeated bullying attempts by the administration to block that probe as well as the ICC's investigation of alleged war crimes committed by Israel against Palestinians in the Occupied Territories.

Secretary of State Mike Pompeo — who signaled earlier this month that such a move was forthcoming — announced the administration's action at a press conference Thursday in which he accused the ICC of being a "kangaroo court" carrying out an "ideological crusade against American servicemembers" and warned that other NATO countries could "be next" to face similar investigations.

The executive order accuses the ICC of making "illegitimate assertions of jurisdiction over personnel of the United States and certain of its allies" and claims the court's probes "threaten the national security and foreign policy of the United States."

I therefore determine that any attempt by the ICC to investigate, arrest, detain, or prosecute any United States personnel without the consent of the United States, or of personnel of countries that are United States allies and who are not parties to the Rome Statute or have not otherwise consented to ICC jurisdiction, constitutes an unusual and extraordinary threat to the national security and foreign policy of the United States, and I hereby declare a national emergency to deal with that threat.

In a lengthy Twitter thread responding to the order, Elizabeth Goitein, co-director of the Liberty and National Security Program at the Brennan Center for Justice, framed the White House's action as "a grotesque abuse of emergency powers, on par with the president's declaration of a national emergency to secure funding that Congress had denied for building a border wall along the southern border."

That Trump said "the prospect of U.S. personnel being held accountable for war crimes is a *national emergency* (The war crimes themselves? Not so much.)" is "particularly galling because the U.S. uses this particular emergency power — the International Emergency Economic Powers Act (IEEPA) — to impose sanctions on foreign government officials who engage in human rights violations," tweeted Goitein.

"The president's abuse of emergency powers has itself become an emergency," she continued, "and if Congress does not act soon, the situation will only get worse."