Protest in a small town: Black Lives Matter comes to rural America — and it matters

In a tiny, conservative and virtually all-white community in upstate New York, a nationwide uprising comes to life 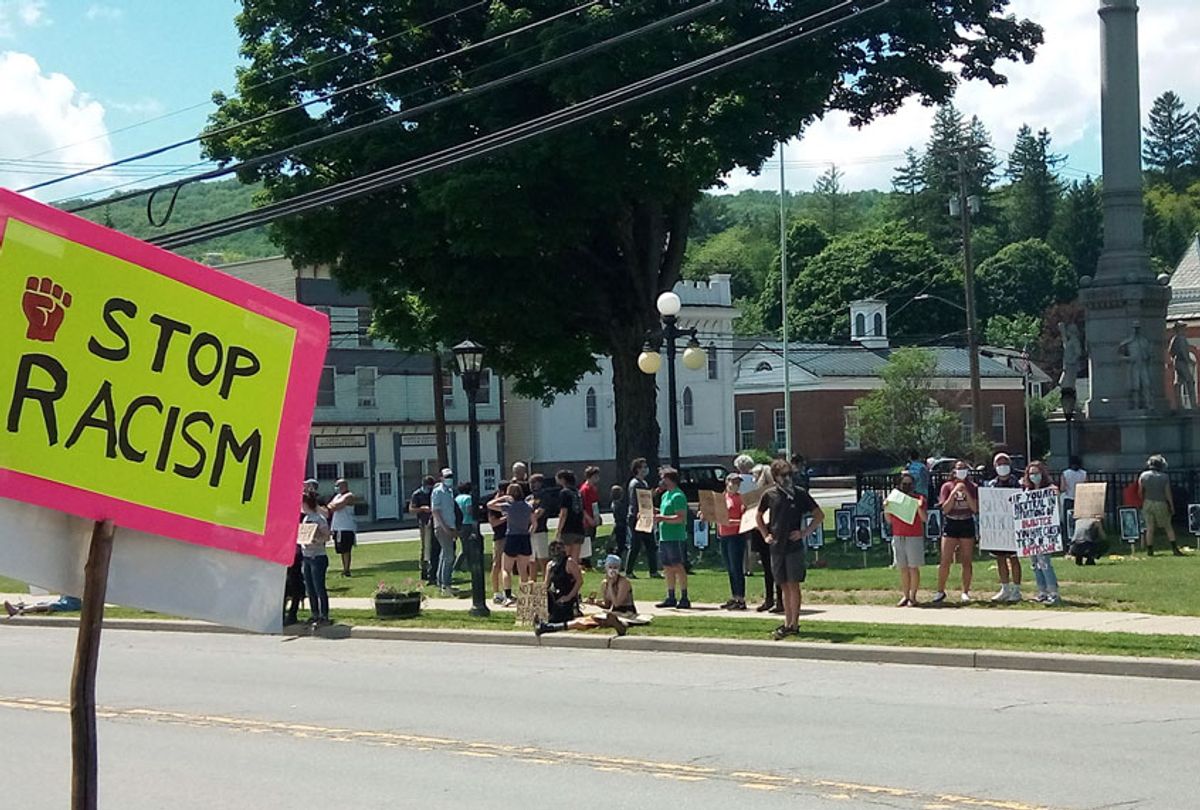 DELHI, N.Y. — According to the New York Times' remarkable list of Black Lives Matter protests over the last two weeks, the largest outpouring of street activism since the Vietnam War has now spread to more than 2,000 cities and towns in every American state. Certainly the biggest and most newsworthy protests have occurred in large, diverse and often symbolic or significant cities: Minneapolis, where George Floyd was killed, but also New York, Los Angeles, Chicago, Atlanta, Seattle, Washington, D.C., and every other metropolis of note. What was less expected, and perhaps even more striking, were the protests we've now seen in hundreds of second-tier cities and small towns clear across the country, including many places with overwhelmingly white populations.

Few of those places were smaller or whiter than this village in west-central New York State, where I attended a BLM protest a week ago that was reported as the largest public demonstration seen in this community, this county or the surrounding region within living memory. More than 700 people, the vast majority of them white and most under age 40, lined Main Street for several blocks in both directions — maintaining appropriate social distancing, and wearing masks — outside the Tractor Supply store and the Speedway mini-mart and the Delaware National Bank and Dubben Brothers Hardware. They did call-and-response chants and held up the now-familiar array of signs protesting police violence or white silence, and honoring the equally familiar litany of black people's names: George Floyd, Breonna Taylor, Eric Garner, Sandra Bland, Tamir Rice, Mike Brown — as you know, we could go on.

Officers of the village police department looked on, clearly unaccustomed to dealing with a crowd of anywhere near this size (or, for that matter, dealing with anything above speed-trap violations and minor property crimes). The Delhi police chief posted a cheerful Facebook message in support of the protest, while making clear that whatever bad things involving cops may have happened elsewhere had nothing to do with him.

I don't mean to suggest there was anything exceptional about this particular protest in this particular town. Quite the opposite, in fact. It was exceptional for me, of course, because I was there — and it was a striking experience for other denizens of this half-forgotten bucolic corner of the Northeast. What was exceptional was the fact that scenes like this were repeated in so many different kinds of places in America, signaling a generational, political, psychological and perhaps spiritual shift that not many people saw coming. No one with any humility or any sense of history can consider the last few weeks without concluding that things have changed more rapidly in this country than almost anyone expected — and that more change is now demanded.

Last Saturday was a beautiful day on the cusp of summer in a region where summer is brief and beautiful days are precious. The mood in Delhi was more festive than somber. Most motorists passing through the center of the village were exuberant in support. I can say with a high degree of confidence that plenty of people in this area feel less than enthusiastic about the BLM cause, but those people were lying low last Saturday afternoon. If 700 people doesn't sound impressive compared to the enormous protests in many American cities, consider that Delhi is a village of around 3,000 people (part of a larger town that totals about 5,000) at the center of a remote rural county of densely forested mountains and family farms with a larger land area than the state of Rhode Island and roughly 45,000 full-time residents — a population largely unchanged since about 1890. In relative terms, it's as if a protest in New York City had drawn more than a million people.

Delhi — which is pronounced DEL-high, by the way — is a college town and the seat of Delaware County, in the western Catskills, about 160 miles northwest of New York City. It's a charming community, but those facts make it sound somewhat more cosmopolitan than it is. I bring this up to reiterate the central point that these protests are happening clear across "middle America," not just in bastions of liberal preciousness and "political correctness." Delhi is much closer to being the former than the latter, and has more in common with predominantly white heartland communities from the Times list — Wenatchee, Washington; Naperville, Illinois; Morgantown, West Virginia — than with Brooklyn or Berkeley.

The college on a hilltop just outside the village, SUNY Delhi, is a third-tier state school focused on agriculture, business and "culinary arts," not a hotbed of radical activism or critical theory. The student body certainly brings some diversity to town during the school year — but the students all went home three months ago, and nobody knows when they'll be back. There were undoubtedly some weekenders and part-timers from the city at that protest (including me), but this is a long way from Woodstock or the Hamptons, and urban refugees are a minor presence up here. If when I say "Catskills" you think "Dirty Dancing," that's also misleading. Delhi is on the other side of the invisible boundary that for decades separated Jews from gentiles in upstate New York; there is exactly one synagogue in Delaware County, in a tiny village 30 miles east of here.

The elected county judge who hears cases every Monday in the historic Delhi courthouse (once featured on the cover of the Saturday Evening Post, in a painting I mistakenly attributed to Norman Rockwell) is a Republican, as are nearly all local elected officials. Donald Trump got 60% of the vote in this county in 2016, which was no surprise; the Republican nominee has carried Delaware County in 33 of the last 35 presidential elections, going back to 1880. (The exceptions were Lyndon Johnson in 1964 and Bill Clinton in 1996.) When I say that last Saturday's protesters were overwhelmingly white, I'm not trying to diss this community or undermine the legitimacy of the event. The Census Bureau reports that Delhi is 92% white and about 4% black — which makes it a veritable cauldron of diversity compared to the county as a whole, which is more than 96% white.

Delaware County has been the focus of heated controversy in recent years over the display of the Confederate battle flag, beloved by so many rural white people in America for what look (at least to outsiders) like barely coded reasons. This is especially ironic given the Civil War monument in front of the Delhi courthouse — just visible toward the right of my mediocre photograph above this story — which commemorates the 144th New York regiment of the Union Army, recruited entirely from this county. The men of the 144th fought at Antietam and Gettysburg and Cold Harbor and the Battle of the Wilderness, and 218 of them never came home to this little green corner of America. Those 218 young white men did not die for a symbol of slavery and white supremacy and Lynyrd Skynyrd or whatever-the-fuck else it supposedly symbolizes; they did not die for what Ulysses S. Grant described as "one of the worst" causes in the history of warfare, "and one for which there was the least excuse."

Maybe, in the long arc of history that Martin Luther King Jr. famously spoke about, they did not die in vain. Protests in this county over the Confederate flag in previous years were pretty small and didn't seem to accomplish much, but I now wonder whether they may have moved the needle just a little in the direction of righteousness. What I witnessed in this insignificant village last Saturday came as a challenge to my deeply ingrained cynicism. To make the point once again, there is nothing special about this place or about last week's protest, except that if it happened here it is happening everywhere, and represents a genuine groundswell that cannot be contained, or even addressed, by the platitudes of conventional politics.

I suspect we are seeing the arrival, and the arising, of a generation that has been raised amid a torrent of lies — and amid the immense moral corruption of America after 9/11 — and has started to see through them to the reality on the other side. We can mock them for being overly woke, or overly concerned with taxonomical or semantic disputes about identity, but when they point to all the lies they have been told, we should perhaps be shamed into silence. Those lies are about race and crime and the social role of the police, as is obvious in this moment — but I think they are also about a whole litany of other things, all of them interconnected: capitalism and democracy and terrorism and gender and the climate catastrophe and the nature of power and the tormented, hypocritical history of this country. It is extraordinary, and perhaps unprecedented, that those lies now feel like lies to young people in predominantly white communities in rural New York State, rural Indiana or rural Idaho just as much as they do to young people in Louisville or Oakland or the Bronx.

Those of us from older generations, especially if we lived through Vietnam or Watergate or the Reagan years or the end of the Cold War, have a harder time believing that the lies are entirely lies. This is understandable, but to employ an overused metaphor, it casts us in the role of Charlie Brown, running up to kick that football one more time. The institutions are still robust enough, we tell each other, and it's foolish and destructive to talk about socialism or police abolition or a radical restructuring of society. After all, Nancy Pelosi or Robert Mueller or Joe Biden or Andrew Cuomo or Tony Fauci or name-your-#Resistance-heartthrob are still here, working to pull the nation back from the brink; a "new normal" can be established even after Trump and the pandemic and this massive, cross-racial generational uprising, and if it won't exactly be the old normal, it will still push the republic forward on a somewhat familiar track.

I do not claim to know which of these views is more correct, although I certainly have my suspicions. I know that this collision will define the future of American politics far more profoundly than a presidential election between Joe Biden and Donald Trump, which is about competing visions of the imaginary past and will settle absolutely nothing.

After two hours of largely upbeat protest on a beautiful Saturday in Delhi, nearly everyone up and down Main Street "took a knee" in commemoration of George Floyd and other victims of police violence. Whether in tribute to my antiquated journalistic ethics or my middle-aged knees, I didn't do it. I retreated under a storefront awning and stood next to a young, bearded bicycle cop, who chewed gum and avoided eye contact with the protesters who politely urged him to join them. It felt like a momentary brotherhood of uncomfortable white men, trying to figure stuff out.

Then everybody got up and there was a lot of hugging, in small, socially-distanced groups. The crowd slowly dispersed into the afternoon. The two women in Tractor Supply smocks, who had been standing outside the store smoking cigarettes and watching us, put their masks on and went back to work.