Multiple Republicans have decried masks, espousing wild theories about the "dehumanization of the children of God" 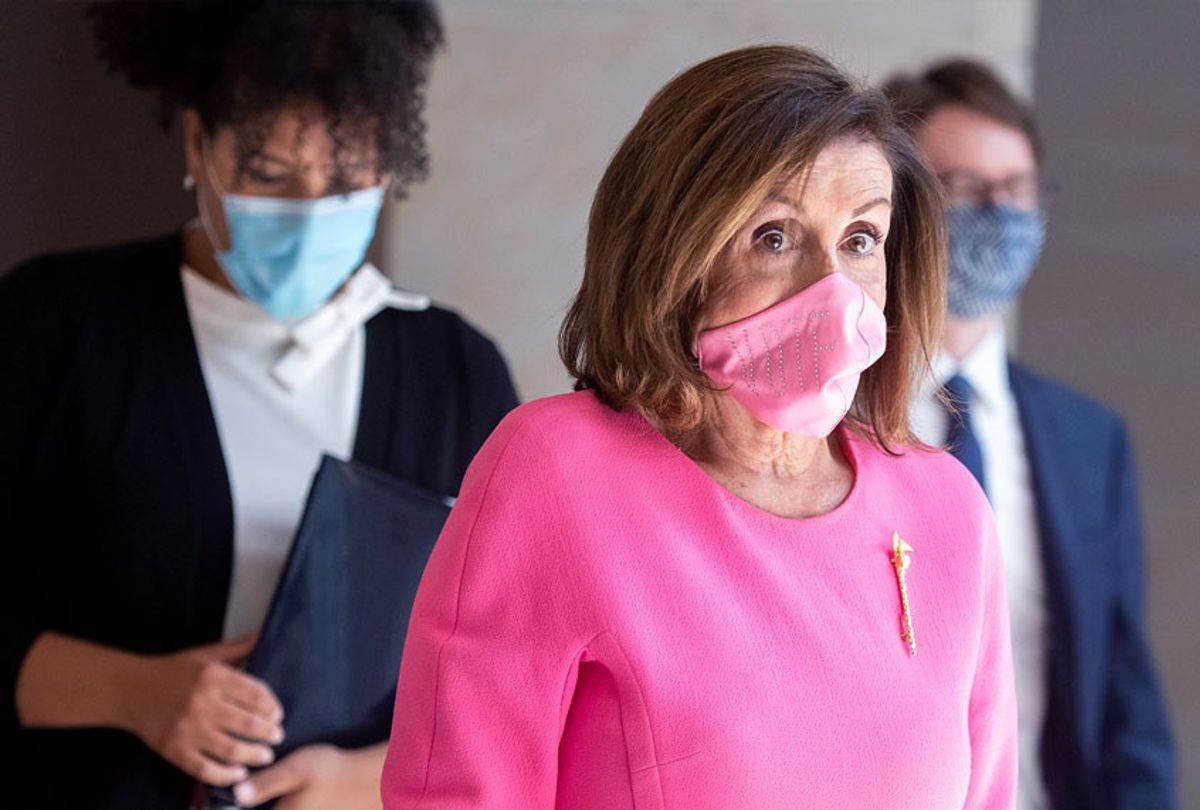 Speaker of the House Nancy Pelosi, D-Calif., on Tuesday moved to require all representatives to wear masks at committee hearings after a Republican lawmaker who flouted advice to wear a face covering tested positive for COVID-19.

Pelosi authorized the House Sergeant at Arms to ban any member who refuses to wear a mask from the chamber, according to The Washington Post. Nonetheless, the article noted that "there are holdouts: a small group of Republican representatives who have consistently declined to wear face coverings."

"This requirement will be enforced by the Sergeant at Arms and non-compliant members will be denied entry," a senior House aide told the outlet. "Ultimately, chairs will have the option of not recognizing members in committee proceedings that fail to comply with the mask requirement."

The move came days after Rep. Tom Rice, R-S.C., said he and two family members had tested positive for COVID-19 last week. CNN congressional reporter Manu Raju noted that Rice was not wearing a mask when he was on the House floor two weeks earlier.

White House press secretary Kayleigh McEnany on Wednesday said West Wing employees would no longer be subject to the rules issued in May requiring aides to wear masks when they were away from their desks and when social distancing was not possible.

"Masks are recommended but not required," McEnany said of the new guidelines for West Wing employees.

The new House rules came after Pelosi requested new guidelines from Brian Monahan, the attending physician of Congress, which now require a face covering for anyone meeting "in a limited enclosed space, such as a committee hearing room, for greater than 15 minutes."

Masks in most other areas are "strongly recommended" under the guidelines.

Lawmakers who refuse to wear a mask will be given the option of working remotely.

"Members always have the option to participate in committee proceedings virtually, including from their Washington, D.C. offices or their districts," the senior aide told The Post.

Several Republicans have decried face masks, which are recommended by every leading health authority and have been found to be effective at limiting the spread of the virus in multiple studies.

"It's not helping your health or anybody else's," Rep. Clay Higgins, R-La., claimed to CNN despite mounting evidence that masks prevent infections. "You're not stopping any sort of a virus. It's part of the dehumanization of the children of God. You're participating in it by wearing a mask."

Rep. Ted Yoho, R-Fla., also refused to wear a mask at the Capitol.

"There's just no need," he told CNN as he asserted his belief in "herd immunity."

But scientists have said that close to 70% of the population would have to be infected with the coronavirus, which along with a risk of death causes myriad post-infection health complications, in order to attain herd immunity. New York, which had the biggest outbreak in the world, reports that about 13% of its population has tested positive for coronavirus antibodies, meaning the world's biggest outbreak would have to grow more than five times larger to achieve herd immunity.

Rep. Jim Jordan, R-Ohio, got into a contentious exchange with Rep. Jamie Raskin, D-Md., at a recent Rules Committee hearing for not wearing a mask. Jordan insisted that he did not have to wear a mask, because he was staying six feet away from others.

Jordan and other Republican holdouts were seen wearing a mask at Wednesday's House Judiciary hearing on police reform, according to The Post.

"After this mark-up is over, we will go home to our loved ones," Chairman Jerry Nadler, D-N.Y., said at the hearing. "I fully expect all members on both sides of the aisle to wear a mask at all times that you are not speaking. If for whatever reason, you are not willing to wear a mask, the House rules provide a way to participate remotely from your office without being physically present in this room."