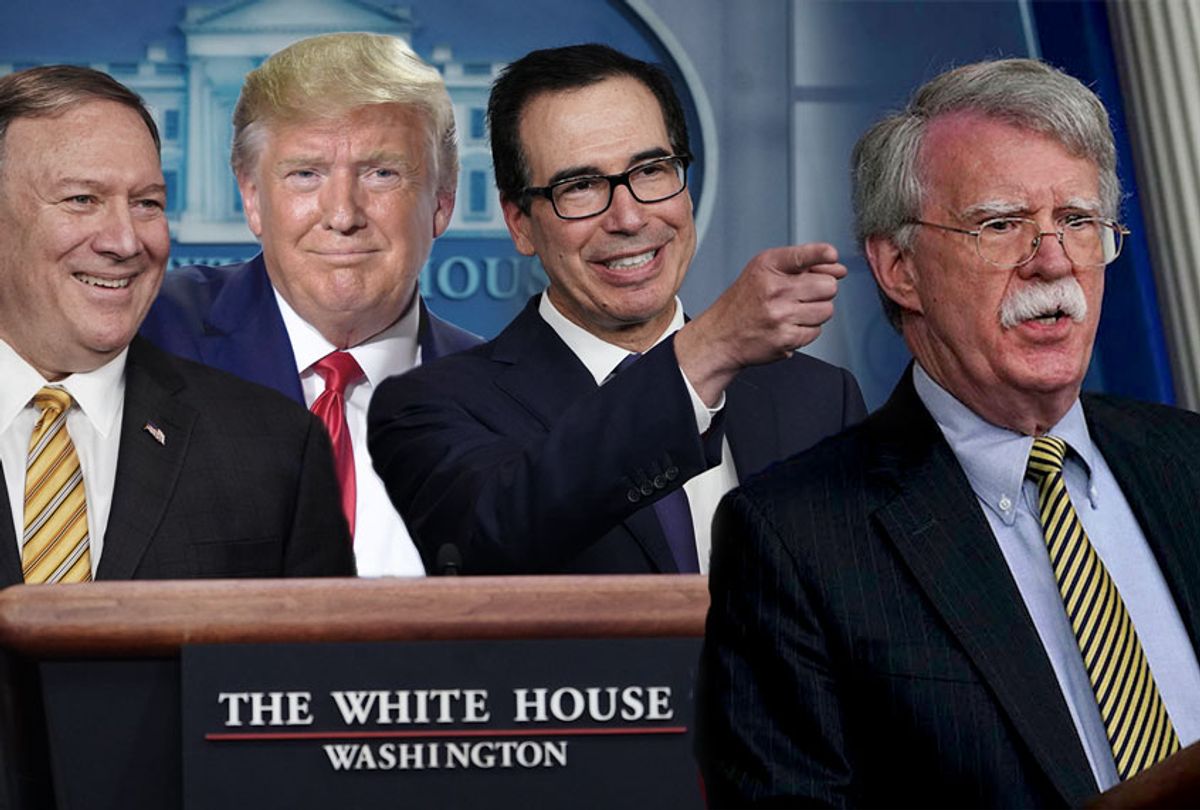 Though the Trump administration is making a show of trying to stop it, former National Security Adviser John Bolton's book is already making waves.

The New York Times, which received an advance copy of the book before its official publication next week, published a report on Wednesday laying out some of its key revelations.

While Bolton himself is in many ways a duplicitous and untrustworthy figure, his allegations about President Donald Trump are worth taking seriously. We've already seen that much of what is going on behind closed doors is nefarious and detrimental to the country — and a person with Bolton's access would likely know many of the White House's darkest secrets.

Here are 7 stunning details from the report:

The book confirms House testimony that Mr. Bolton was wary all along of the president's actions with regard to Ukraine and that Mr. Trump explicitly linked the security aid to investigations involving Mr. Biden and Hillary Clinton. On Aug. 20, Mr. Bolton writes, Mr. Trump "said he wasn't in favor of sending them anything until all the Russia-investigation materials related to Clinton and Biden had been turned over." Mr. Bolton writes that he, Mr. Pompeo and Defense Secretary Mark T. Esper tried eight to 10 times to get Mr. Trump to release the aid.

2. Bolton says that similar incidents occurred with Turkey and China

"The pattern looked like obstruction of justice as a way of life, which we couldn't accept," Bolton wrote.

He blames the Democrats for impeaching Trump on grounds that were far too narrow and solely focused on Ukraine, but this complaint is deeply ironic given Bolton's refusal to testify.

3. Trump tried to get China to help him win re-election, the book claims

Bolton wrote that "the president overtly linked policy to his own political fortunes as he asked [Chinese President] Xi to buy a lot of American agricultural products to help him win farm states in this year's election. Mr. Trump, he writes, was 'pleading with Xi to ensure he'd win. He stressed the importance of farmers, and increased Chinese purchases of soybeans and wheat in the electoral outcome.'"

4. Trump reportedly did not know Britain is a nuclear power

This is a basic fact about world politics, and yet the president seems to have no clue what's going on.

5. Trump reportedly asked if Finland is a part of Russia

The report doesn't say who Trump asked. Hopefully, it wasn't the Finns. Or the Russians.

During Mr. Trump's 2018 meeting with North Korea's leader, according to the book, Secretary of State Mike Pompeo slipped Mr. Bolton a note disparaging the president, saying, "He is so full of shit."

It's not clear if anything ever came of these reports.

UPDATE: One of the most horrifying details of the book emerged after this story was first published. As I discussed in another article, Bolton's book indicates that Trump encouraged China to pursue its policy of putting a Muslim minority population in concentration camps.