John Bolton, Donald Trump and the foreign policy disaster awaiting the next president

John Bolton is no hero. But his revelations about the chaotic Trump presidency pose a conundrum for Joe Biden 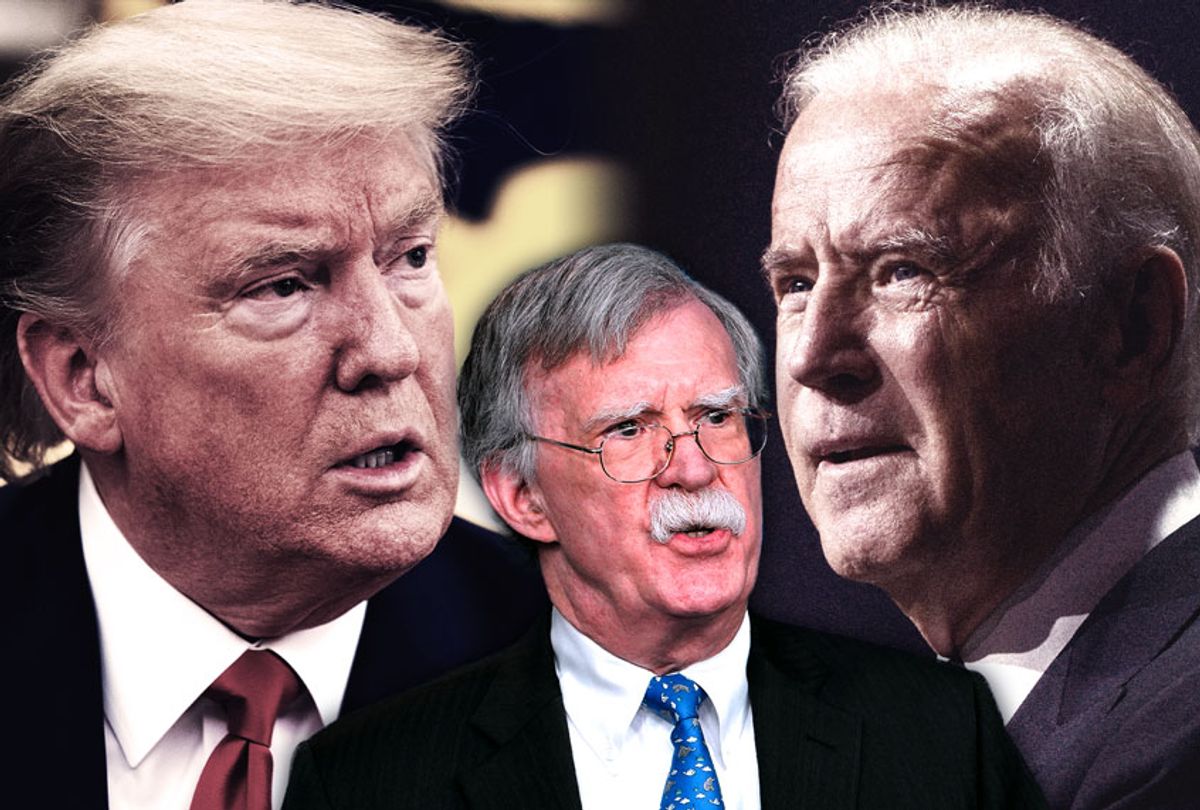 On Friday afternoon, U.S. District Judge Royce Lamberth  will hold a hearing to decide whether to grant the Department of Justice's request for a temporary restraining order against former national security adviser John Bolton to prevent the publication of his book, "The Room Where It Happened," next Tuesday. Considering the fact that the book has already been read by journalists and excerpted in major newspapers, this would seem to be a classic case of shutting the barn door after the horse has bolted. Needless to say, this is just another move by Trump's DOJ — and specifically Attorney General Bill Barr — to appease him. The judge cannot order the public to un-see what they have seen, classified or not.

Lawfare offers a full rundown of the legal issues in the case, but in a nutshell, what seems to have happened is that Bolton submitted his book for the normal government review and, after a few months of back-and-forth revisions, it was cleared for publication. At that point, Trump's favorite new henchman (and Bolton's successor), national security adviser Robert O'Brien, stepped in and gave the book to a political appointee who claimed it still contained classified information and refused to clear it. Bolton and his publisher decided to go ahead anyway and here we are.

The DOJ has asked for this temporary restraining order and is also seeking to seize any earnings from the book which, I suspect, is the real point. Trump wants to punish Bolton and judging from the excerpts we've seen so far, you can understand why.

He is not happy:

One assumes Judge Lamberth will ask the government how it can claim that information is simultaneously top secret and also a bunch of lies. Let's just say that from what we've seen of Bolton's observations about Trump, they're entirely in keeping with everything we already knew about him.

Before getting into any of the juicy details, let me just stipulate that John Bolton is one of the most odious men in American politics and has been for decades. I've written a boatload about him over the years. His self-serving behavior during the impeachment hearings and Senate trial will stand as a historic example of selfishness, cowardice and greed. Everything he put in this book he could have come forward and told any Washington journalist, but he chose to save it for the time when he could rake in millions.

Not that I think it would have made any difference in the outcome of the impeachment. The Republicans in the Senate are even more cowardly than Bolton. But it would have been the patriotic thing to do. In fact, all these former insiders, from former Defense Secretary James Mattis to former White House chief of staff John Kelly to any number of others who have emerged in recent days, should have stepped up long ago.

Perhaps most reprehensible of all, Bolton blames the Democrats for failing to impeach Trump on a wider array of charges, as if his own failure to come forward with what he knew weren't a key reason why that happened the way it did. He cannot shine the shoes of his former aide Fiona Hill and all the others who put their careers and reputations on the line to testify.

I will not buy Bolton's book and I won't even cry if the DOJ succeeds in seizing the profits. It couldn't happen to a nicer guy. But as loathsome as he is, Bolton has written a book that must be reckoned with. It's one of the few insider accounts of what Trump has done to foreign policy, and it's important that we keep in mind that Bolton's worldview could color how an incoming Democratic administration responds to that — and not in a good way.

Bolton claims that Trump's singular concern is getting re-elected, and I think we knew that. We don't know what deals he may have made with Russian President Vladimir Putin in those private meetings but Bolton reports that Trump outright asked Chinese President Xi Jinping to help him do it. Bolton says he was not allowed by the White House to use Trump's actual words but Gabriel Sherman at Vanity Fair reports that he has seen an unredacted copy of the exchange and that Trump allegedly said, "Make sure I win."

No doubt Xi would be happy to do that. For all Trump's bluster about China, Trump's erratic behavior, from nodding in approval at China's concentration camps for the Uighur people to the lopsided and superficial trade deals, has left the U.S. operating without a coherent policy at all. Should Joe Biden take over next January, his administration will not be dealing with the same dynamic they left four years ago.

We must hope that Team Biden doesn't see this as necessitating some kind of "get tough" policy simply to prove that they aren't going to be rolled as Trump was. Bolton's account of Trump's behavior rings true, but his analysis of the Chinese government is inherently suspect. With the degradation of the State Department and the intelligence community over the past three and a half years, an incoming Biden administration will pretty much have to start from scratch to assess the full reality of the situation.

I think we all know how Trump has behaved with European allies. According to Bolton, the president actually believes his nonsensical insistence that those nations haven't "paid their dues" to NATO, and came much closer to pulling the U.S. out than we knew. I'm sure that's true. Trump's petulant decision to pull U.S. troops from Germany after Chancellor Angela Merkel told him that she wouldn't attend his G7 party, due to the pandemic, shows how little he values the alliance. Again, one only hopes that the next administration doesn't decide to blindly pump up unnecessary military spending only to prove that they are not Trump. His decisions are made capriciously and without due diligence, but that doesn't mean that the U.S. should automatically do the opposite. After all, that's his pattern.

Trump's "love affair" with North Korean dictator Kim Jong-un was a joke from the beginning. Trump apparently said he considered Venezuela to be part of the United States and thought "it would be cool" to invade that nation. And you may recall this incident from 2018:

Bolton says Trump wanted to grant white South Africans both "asylum and citizenship." You really can't make this stuff up.

The good news here, if you want to call it that, is that the rest of the world sees Trump for the buffoon he is and is unlikely to perceive much of what he's done as a genuine reflection of U.S. policy. But we can't expect any of them to pretend this never happened. It's clear that the entire Republican Party, including Bolton and all the others who only belatedly stood up — or haven't done so at all — are as culpable as Donald Trump.

Frankly, any country that would elect a man like him cannot be trusted as a reliable partner in global affairs. It's going to take a lot more than simply reversing Trump's orders to change that.