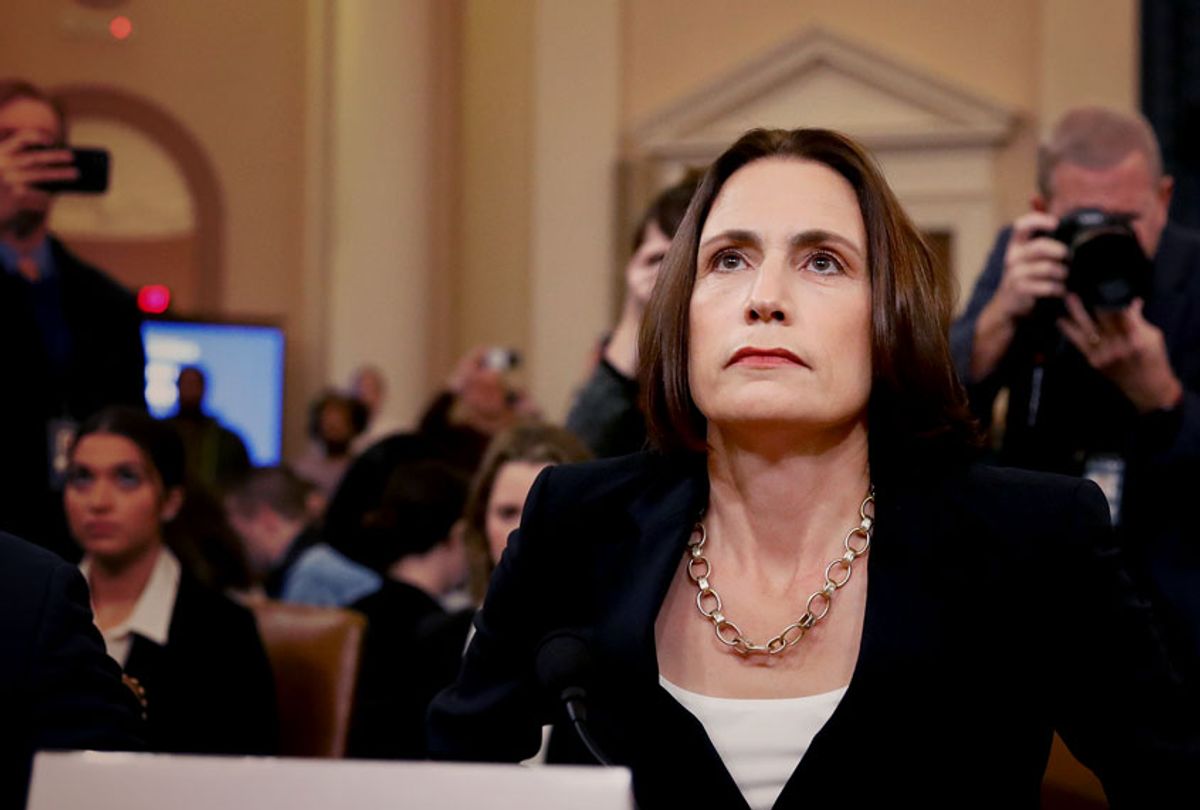 The White House's former top Russia adviser, Fiona Hill, testified before the House Intelligence Committee on Thursday and rejected the "fictional narrative" pushed by President Trump and congressional Republicans that Ukraine, rather than Russia, meddled in the 2016 presidential election.

Hill, a British-born Harvard PhD who formerly directed the Center on the United States and Europe at the Brookings Institution, joined the National Security Council in March 2017 and resigned this past August. In her opening statement, she spoke forcefully against the Ukraine-centric conspiracy theory that has apparently been promoted by Rudy Giuliani and Paul Manafort, as well as the president:

Based on questions and statements I have heard, some of you on this committee appear to believe that Russia and its security services did not conduct a campaign against our country — and that perhaps, somehow, for some reason, Ukraine did. This is a fictional narrative that has been perpetrated and propagated by the Russian security services themselves.

Testifying as part of the House impeachment inquiry into the president, Hill added, "I refuse to be part of an effort to legitimize an alternate narrative that the Ukrainian government is a U.S. adversary, and that Ukraine — not Russia — attacked us in 2016."

Many Republicans on panel, led by Rep. Devin Nunes of California, have embraced and promoted the narrative that Ukraine meddled in the 2016 election and colluded with Democrats in an effort to defeat Trump. Nunes has mentioned some version of this debunked conspiracy theory at every committee hearing so far — either in his opening statements, while questioning witnesses and in his closing remarks.

Trump and his allies in Congress have pushed the discredited theory even though the U.S. intelligence community has unanimously concluded that Russia interfered in the 2016 election with the goal of boosting his candidacy and harming the campaign of his Democratic rival, Hillary Clinton.

Russia's efforts to meddle in the election have been confirmed by a host of federal, congressional intelligence and national security groups, including the CIA, the Office of the Director of National Intelligence, the FBI, the Department of Justice, the NSA, the Department of Homeland Security and intelligence committees in both the House and Senate.

Robert Mueller, the former special counsel who investigated Russian interference in the 2016 election, also confirmed those conclusions. In his 448-page report, Mueller outlined Russia's attempts to influence the 2016 election. While testifying before Congress in July, Mueller reiterated his findings and noted the Russians have never stopped their interference.

"They're doing it as we sit here," Mueller told lawmakers of Russian interference at the time.

Trump, nevertheless, has continued to dismiss and attack the U.S. intelligence community's findings that the Russian government interfered in the 2016 election. Attorney General Bill Barr has directed the Justice Department to investigate the origins of Mueller's investigation, an apparent effort to suggest that the entire probe was corrupt and motivated by partisan politics.

In her opening statement, Hill also took a none-too-veiled jab at her former boss, Trump's former national security adviser John Bolton, who has so far refused to testify in the impeachment inquiry.

"I believe that those who have information that the Congress deems relevant have a legal and moral obligation to provide it," she testified.

Earlier this month, Bolton's lawyer, Charles Cooper, told House Democrats that his client had been present for "many relevant meetings and conversations" on Ukraine, some of which have yet to be disclosed to impeachment investigators. Cooper indicated that Bolton would respond to a congressional subpoena only if a federal court rules that he can defy the orders of the White House.

Bolton is seen by Democrats as a crucial witness who could help them make the case that Trump sought to leverage a potential White House meeting with Ukraine's president, along with millions of dollars in military aid approved by Congress, in an effort to pressure Ukraine to commit publicly to investigations that could help Trump's re-election campaign.

Impeachment investigators are specifically investigating allegations that Trump pressed Ukrainian President Volodymyr Zelensky to open an investigation into former Vice President Joe Biden, a frontrunner for the Democratic presidential nomination, as well as the alleged Ukrainian interference in the 2016 election.

Bolton's deputies have previously testified that he was angry about efforts to pressure Ukraine to open investigations into the president's political rivals. He allegedly described Rudy Giuliani, the president's personal lawyer — who is accused of orchestrating a smear campaign in Ukraine — as a "hand grenade who's going to blow everybody up."

Hill joins a growing list of at least eight witnesses in the impeachment inquiry who have testified that Ukraine did not interfere in the 2016 election.