Kayleigh McEnany: Trump hires “dumb as a rock” employees in the tradition of Lincoln

"He likes the model of having a 'team of rivals,' like what we saw in President Lincoln's administration” 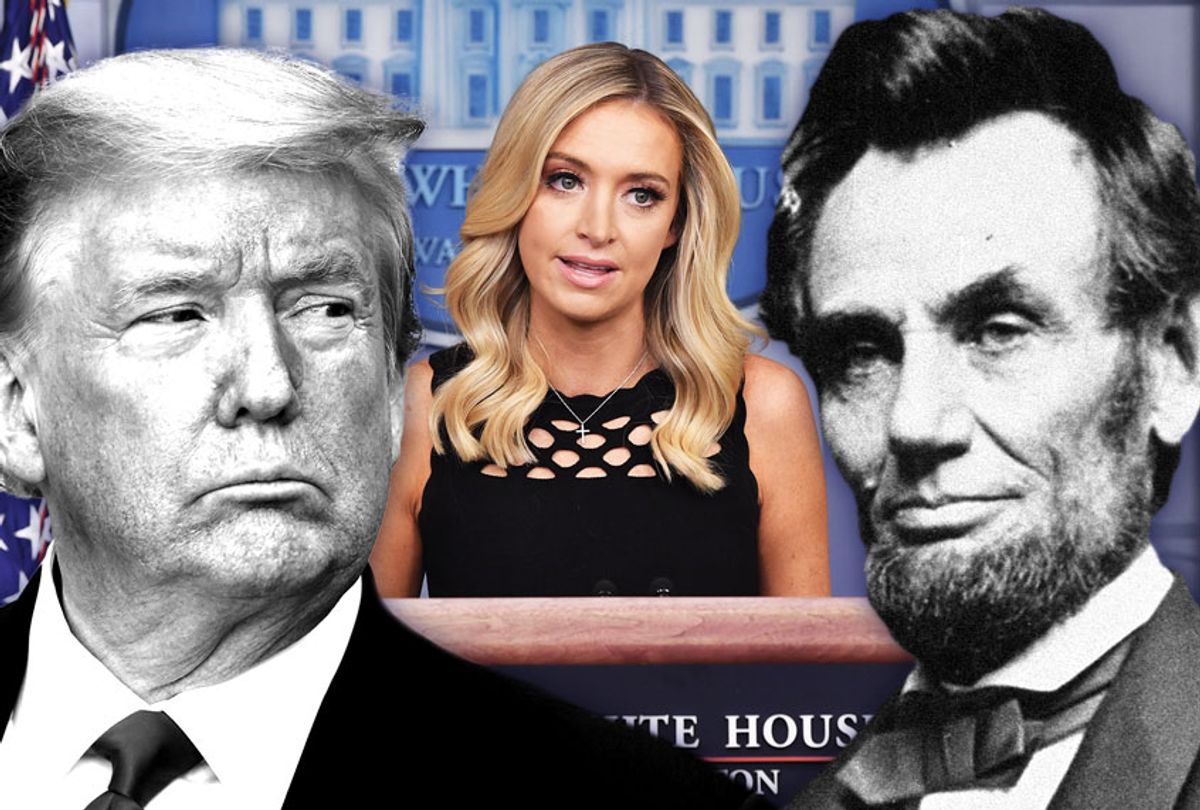 During a contentious White House press briefing, press secretary Kayleigh McEnany claimed that President Donald Trump hires individuals who he later calls "dumb as a rock" and "incompetent" because that's exactly what former President Abraham Lincoln would have done.

McEnany on Friday was responding to a reporter who asked, "Why does the President keep hiring people who are 'dumb as a rock,' 'overrated,' 'way over their heads,' 'wacko' and 'incompetent'?"

"So the president makes hiring decisions based on the fact that he likes to have countervailing viewpoints," McEnany responded.

The press secretary claimed that the president had told her that very morning that he likes "to counterbalance my opinion with individuals who very often have the very opposite opinion of my own."

The reporter then asked a follow-up question.

"There's obviously value in hiring a team of rivals. It worked well in the past," he said. "But then if you're going to hire a team of rivals, why hire rivals who are 'dumb as a rock,' 'overrated,' 'way over their heads,' 'wacko' and 'incompetent' — how does that help?"

"Sometimes those rivals prove those labels to be true," McEnany replied.

She added that this was "particularly true" in the case of John Bolton, offering as evidence the fact that the former national security adviser "repeatedly praised the president" then was "widely criticized by The New York Times for his book" after he "turned."

"John Bolton has proven himself to have those labels as true," the press secretary concluded.

The "team of rivals" trope entered the vernacular after Doris Kearns Goodwin published an award-winning historical account of Lincoln's presidency under that title. The book went on to form the basis for the Academy Award-winning film, "Lincoln," and its titular phrase was often invoked in comparison with former President Barack Obama's leadership strategy.

Goodwin described what the phrase means to NPR's Terry Gross in 2012:

Well, what [Lincoln] had going for him, which I think is so unusual in political life, is that he had a set of emotional strengths that today we might call emotional intelligence. So when all sorts of rivalries sprung up with these guys, and when they got hurt with one another, when they would call each other names — I mean if we ever heard what they were calling each other then in today's parlance — 'liar,' 'traitor,' 'thief' — I mean and these things are being said in Cabinet meetings — but he was somehow able to be in the center of that storm.

Goodwin's own description of Lincoln's strategy appears to be the opposite of the one understood by McEnany, whose boss has himself called people in his own administration "liars," "traitors" and "thieves."