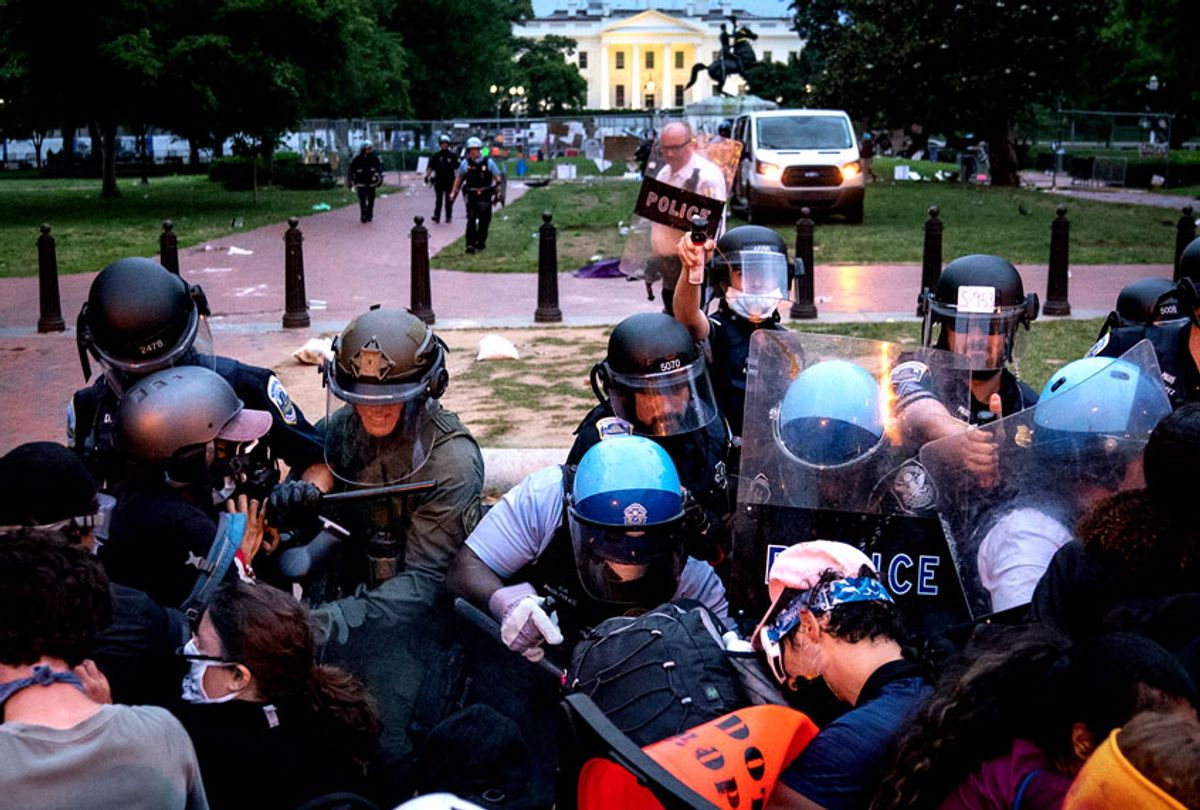 Protesters clash with U.S. Park Police after attempting to pull down the statue of Andrew Jackson in Lafayette Square near the White House on June 22, 2020 in Washington, DC. Protests continue around the country over police brutality, racial injustice and the deaths of African Americans while in police custody. (Drew Angerer/Getty Images)
--

Without initially offering an explanation, the Secret Service late Monday ordered members of the press to leave the White House grounds as law enforcement officials in riot gear used pepper spray and batons to beat back a nearby protest at which some attempted to topple a statue of former President Andrew Jackson.

"The members of the press were rerouted to exits on the south side of the complex for their own safety" as demonstrations raged in Lafayette Park, the agency spokesperson said.

CNN reported late Monday that "journalists, including two CNN employees, were told they had to leave the White House grounds immediately via the south side of the complex, which is not the normal entrance/exit for the press."

"The move to force members of the media off White House grounds is highly unusual," the outlet reported. "Typically in security situations at the White House, the press corps is locked down inside the complex."

Hundreds of demonstrators gathered near the White House Monday as part of ongoing demonstrations sparked by the police killing of George Floyd in Minneapolis last month.

Videos posted to social media show protesters using ropes in an attempt to pull down a statue of Jackson — the slave-owning former president responsible for the Trail of Tears — before police cleared the area using chemical irritants and batons.

President Donald Trump, a self-proclaimed "fan" of Jackson, tweeted late Monday that "numerous people" were "arrested in D.C. for the disgraceful vandalism, in Lafayette Park, of the magnificent Statue of Andrew Jackson."

Trump went on to threaten protesters with a decade in prison "under the Veteran's Memorial Preservation Act."

The Washington Post reported that "it was not immediately clear if anyone had been arrested."

"In a chaotic scene, a helicopter flew low over the park as 150 to 200 U.S. Park and D.C. police moved through," according to the Post. "Officers used a chemical irritant to disperse protesters and sweep them back to H Street NW. Protesters did smash the wooden wheels of four replica cannons at the base of the Jackson statue."