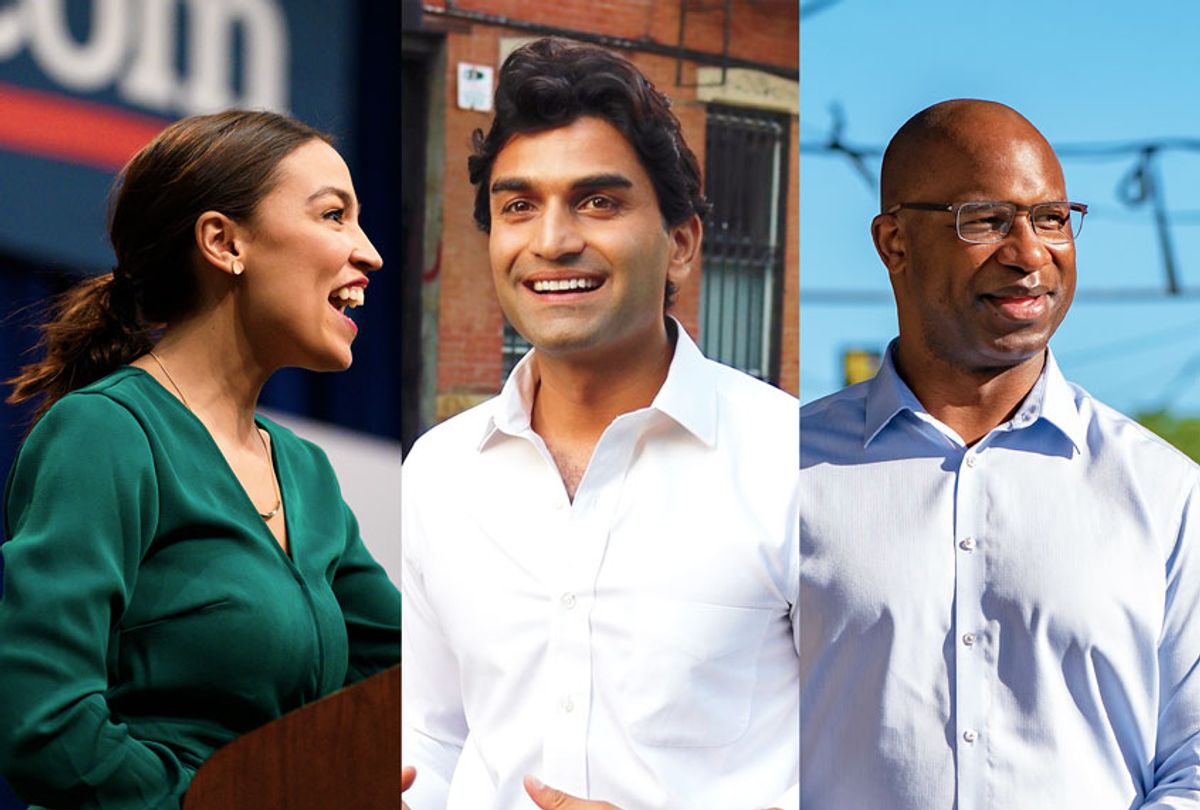 Though several closely-watched races in Tuesday's primaries remain too close to call, preliminary results have likely rattled Senate Minority Leader Chuck Schumer, D-N.Y., after several moderate candidates backed by establishment Democrats appear to have come up short against progressive candidates punching above their weight in the Empire State.

To the south in North Carolina came a rare Republican primary defeat for a candidate backed by President Donald Trump. The candidate endorsed by Trump to replace the congressional seat vacated by White House chief of staff Mark Meadows lost to a 24-year-old newcomer who uses a wheelchair.

Here's a rundown on what we can report as of Wednesday afternoon:

Kentucky's high-profile Senate primary between Amy McGrath and Charles Booker is still too close to call. With an estimated 10% of the vote counted, McGrath leads Charles Booker by a margin of 44 to 39.6%, according to NBC News. A final count is not expected until next week. (The New York Times estimate of the proportion of votes counted is much higher, an indication that no one really knows how many mail-in ballots are still outstanding.)

Booker — a popular state senator and progressive millennial from Louisville's poorest zip code — had enjoyed a late-game surge against McGrath, the former combat pilot and well-funded political moderate who was handpicked by Schumer to take on Senate Majority Leader Mitch McConnell in November.

An upset would create one of the most compelling national narratives going into Election Day: a Black progressive running on a Bernie Sanders-style platform in a red state whose profile rose on the wave of the social justice movement sweeping the country in the wake of the killing of George Floyd by a Minneapolis police officer.

The protest movement, which caught fire in Louisville after the recent police shooting death of former EMT Breonna Taylor in her apartment, gave new life to Booker's Black Lives Matter "from the hood to the holler" message, which aimed to unite Kentuckians struggling in cities and rural pockets alike behind progressive ideals.

Booker, some local analysts argued, also appeared to be the candidate best poised to benefit from allegations of voter suppression, which appear to have been overestimated. The Kentucky secretary of state estimated Tuesday that 1.1 million residents would cast a vote in the state's primary, topping the previous record of 922,456 in 2008 (though turning out at about the same rate).

There was a moment of drama at the Louisville Expo Center, where the 6 p.m. cutoff left out many voters who were waiting in the parking lot, leading some to rattle the arena's glass doors. The group was allowed inside after a judge ruled that anyone on the pavement by 6 p.m. was "in line" and could vote.

In North Carolina, 24-year-old Madison Cawthorn, who was left partially paralyzed in an accident from the waist down, pulled off a stinging upset in the primary for the seat vacated by Meadows when he stepped down after being named Trump's White House chief of staff. Cawthorn walloped Lynette Bennett, who had racked up a number of major endorsements, including from Trump, Meadows and Rep. Jim Jordan, R-Ohio.

Though Cawthorn paid homage to the president in his victory speech — "I don't think this was a referendum on how much influence the president has ... There will be no stronger supporter of the president than me" — Bennett's defeat is one more in a series of setbacks for Trump, who has recently taken a beating in polls against presumptive rival Joe Biden amid a nationwide surge in coronavirus cases, widespread public outrage about his response to protests against police brutality and a his disastrous rally in Tulsa last Saturday with thousands of empty seats.

New York held a number of significant races, most notably Rep. Alexandria Ocasio-Cortez's first primary as an incumbent, in which she easily shrugged off a field of hopefuls led by Michelle Caruso-Cabrera, a former CNBC host and former Republican.

Caruso-Cabrera had called Ocasio-Cortez "a polarizing, divisive force" in a virtual debate earlier this month, but the fiery freshman representative united voters in her district, showing that her 2018 upset was not a fluke.

In fact, progressives around the state seemed eager to prove that the party's leftward lurch in the 2018 midterms was not a fluke.

Bowman enjoyed endorsements from Ocasio-Cortez, Sanders and Sen. Elizabeth Warren. Former Democratic presidential candidate Hillary Clinton, along with Schumer and House Speaker Nancy Pelosi, led the establishment wing who threw their voices behind Engel. Although no major news outlets have called the race, Engel is clearly in peril of losing.

Dual retirements of two long-serving Democrats chummed the primary waters in the South Bronx and in the northern New York suburbs of Westchester and Rockland counties, with each race drawing more than a half-dozen hopefuls.

In the South Bronx, one of the most-heavily Latinx districts in the nation, 32-year-old Ritchie Torres, a progressive who is openly gay, maintains a comfortable lead over the field, which includes right-wing Pentecostal preacher Rubén Díaz Sr., a former state senator who is openly anti-gay and was seen as the favorite.

The suburban precincts in Westchester and Rockland — the district where Hillary Clinton lives, as it happens — hoisted up another progressive, Mondaire Jones, a former Obama Justice Department employee who scored endorsements from Sanders and Warren, who has pulled ahead of a group of contenders which includes establishment favorite Evelyn Farkas and a pharmaceutical heir. Several election pundits have declared Jones the winner, although major news organizations have not done so. If Jones and Torres should both be elected, they would be the first two openly gay Black members of Congress.

New York's 12th district, which includes the East Side of Manhattan and slices of Brooklyn and Queens — and has the highest per-capital income of any district in the nation — could see the biggest stunner. Progressive Suraj Patel trails 14-term establishment incumbent Carolyn Maloney by less than 600 votes at the end of machine vote-counting. That race is still too close to call and could take days or weeks to be decided, but Maloney's seat was considered safe and a loss would come as a major bucket of cold water for Schumer and the Democratic power structure.

New York also held a special election in the heavily Republican 27th district, which covers the state's western stretches between Buffalo and Rochester and went for Trump by about 25 points in 2016.

Voters there were deciding who would temporarily fill the seat vacated by Republican Rep. Chris Collins after he resigned amid an insider trading scandal. As expected, Republican Chris Jacobs easily defeated progressive Democrat Nate McMurray. The two will square off again in the fall for a full term.