A 1,500 mile-long dust plume is approaching the United States. Here's what to expect 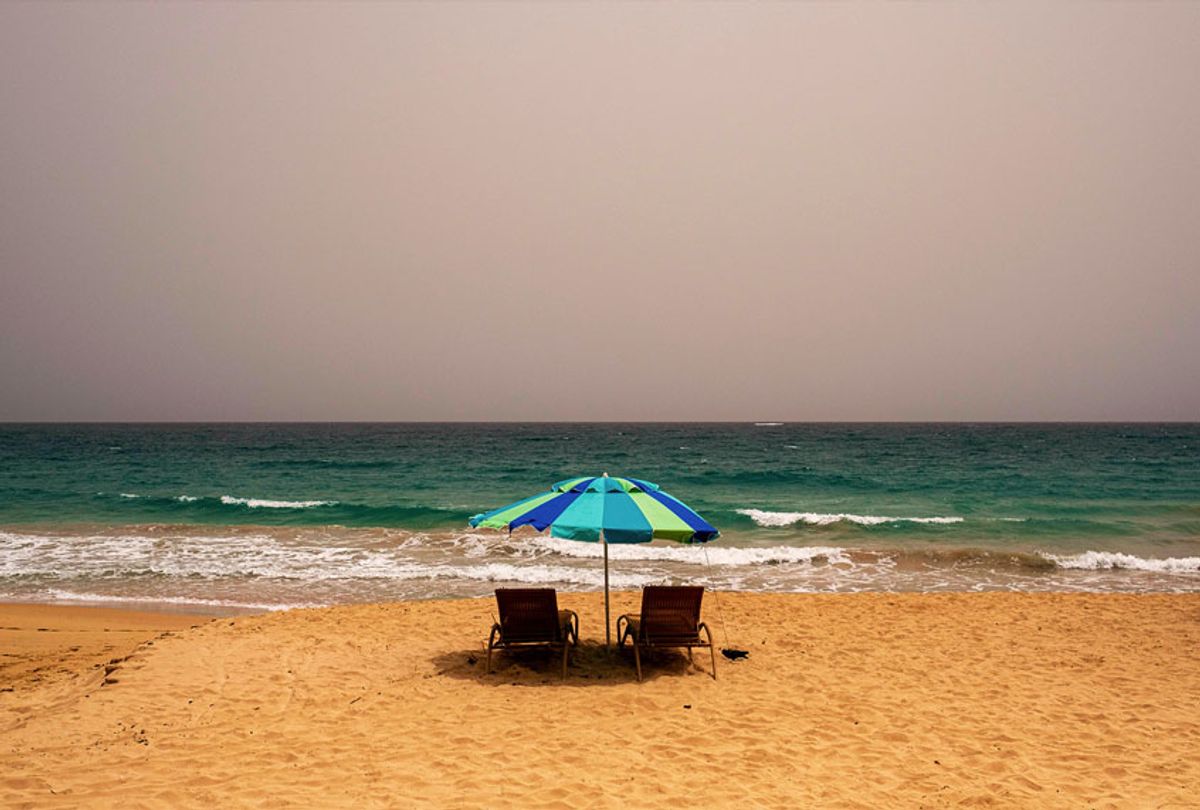 As if a global pandemic weren't apocalyptic enough, now we have to contend with a dust storm. Indeed, a massive dust plume from the Sahara desert is expected to cloak parts of the United States this week.

CBS meteorologist Jeff Berardelli explained on Twitter that, by Thursday morning, the dust had been spotted near coastal areas in Mississippi, Alabama and the Florida panhandle. An air quality alert has been issued for some parts of Louisiana for Friday, where there are already reports of hazy skies. Astronaut Doug Hurley tweeted an image of it from space earlier this week depicting the enormity of it. Other meteorologists are predicting it could even hit the Midwest.

"The Saharan dust will overtake entire states," CNN meteorologist Tyler Mauldin said. "Even southern Illinois and Ohio may get into the mix. That's how far north it could get pulled up."

As with the recent media hype over murder hornets, one might wonder if the Saharan dust plume will actually affect the average Americans' life. Indeed, meteorologists and atmospheric scientists believe the billowing dust may have deleterious effects on those with underlying respiratory conditions. Considering coronavirus can be exacerbated by respiratory conditions, the dust plume could indirectly cause some with COVID-19 to experience worse symptoms than they might have under normal circumstances.

The westbound dust plume, which scientists refer to as the Saharan Air Layer (SAL), is actually not a new phenomenon. Generally it happens every year, sometimes even a few times a year.

"SAL activity typically ramps up in mid-June and peaks from late June to mid-August with new outbreaks occurring every three to five days," hurricane researcher Dr. Jason Dunion of the National Oceanic and Atmospheric Administration said in an interview published by NOAA. "During this peak period, it is common for individual SAL outbreaks to reach farther to the west—as far west as Florida, Central America and even Texas—and cover extensive areas of the Atlantic (sometimes as large as the lower 48 United States)."

As further explained by NASA:

Every year, winds loft about 800 million metric tons of desert dust from North Africa—by far the planet's largest source of airborne dust particles. The dust is often visible from space during the spring, summer, and early fall, when huge plumes of dry, dusty air from the Sahara Desert blow westward over the tropical Atlantic Ocean.

What makes this dust plume newsworthy is the size of it: the thickest parts of the plume appear to stretch about 1,500 miles, according to NASA. This is partly due to a cluster of small storm systems over central and western Africa. MIchael Lowry, an atmospheric scientist said on Twitter: "the ongoing Saharan #dust outbreak across the tropical Atlantic is *by far* the most extreme of the MODIS satellite record— our most detailed, continuous record of global dust back to 2002."

According to the Weather Channel, the plume is "getting a little more hype this year on social media – amid the coronavirus pandemic – where topics are dramatized and more people pay attention to the everyday oddities of the world."

Those who could be particularly vulnerable to lower air quality are being advised to spend more time inside if their city is expected to be affected by the giant dust plume.

"Being exposed to this kind of a deterioration in air quality may enhance your chances of or enhance your susceptibility to a viral infection," Dr. Alpana Chandra at Mercy Clinic Pulmonology told NBC affiliate KSDK in St. Louis, Missouri."I think it is very important to be a little bit more cautious about keeping that mask on."

Chandra added: "We shouldn't be caught off guard, especially with the pandemic and everything else that's going on."

Last weekend, Puerto Rico's Department of Health also said that people who have asthma, respiratory illnesses and allergies, should be careful.

In addition to low air quality, some people in affected areas can expect more colorful sunsets.

"The main impacts of the Saharan dust will be hazy skies during the day, locally reduced visibility and degraded air quality," the Weather Prediction Center said via CNN. "However, this will also make for some very colorful sunrises and sunsets with deeper oranges and reds compared to normal."