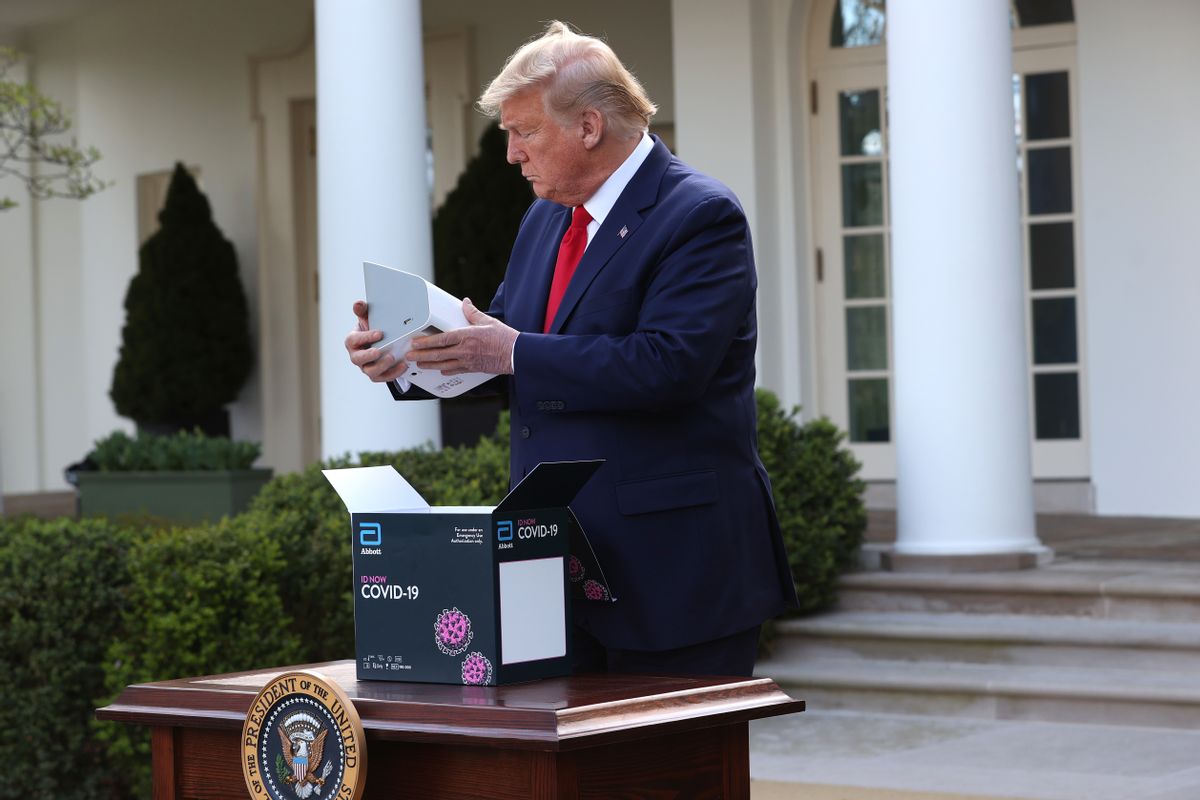 MARCH 30: U.S. President Donald Trump takes a new COVID-19 test kit developed by Abbott Labs out of its box during the daily coronavirus briefing at the Rose Garden of the White House on March 30, 2020 in Washington, DC. (Photo by Win McNamee/Getty Images)
--

Clarification: An earlier version of this article stated that the FDA issued a warning in mid-May that the Abbott short-term test missed about half of positive cases. The warning informed the public about the results of "some scientific studies" conducted by third parties, one of which reached that conclusion.

In early 2020, Social Security Administration Commissioner Andrew Saul engaged in several stock transactions that appear to have anticipated market reactions to the coronavirus crisis, according to financial disclosure forms.

Though Saul — a wealthy New York businessman with prior government service and decades of financial expertise — has a substantial and diverse portfolio, the timing of the transactions, together with his activity in the administration and investment experience, is intriguing.

It also appears that Saul, who led the U.S. government's Federal Retirement Thrift Board from 2002 to 2011, is among the few senior executive branch officials who have not yet submitted annual financial disclosure forms this year (they are usually due by May 15), making it difficult to understand his most recent market transactions.

President Trump picked Saul, who was once his classmate at the University of Pennsylvania's Wharton School for Business, for the six-year commissioner position in January 2019, but the nomination drew backlash from advocacy groups because of Saul's connections to a right-wing think tank — the Manhattan Institute — which has lobbied for large cuts to Social Security benefits. Saul also allegedly once impersonated a police commissioner to evade a trespassing charge.

Though Saul's nomination was delayed, he eventually got the job, and his compulsory disclosures at the time revealed an investment between $500,000 and $1 million in Abbott Labs (disclosure forms only require a range, not specific amounts), which paid an annual dividend of between $5,000 and $15,000. He reported the same numbers for his holdings in UnitedHealth at the time.

Recent disclosure forms, however show that Saul bought shares in Abbott Labs worth between $15,000 and $50,000 on Jan. 15, Feb. 21 and March 16 — the latter date being exactly when the Social Security Administration announced it would close its offices and two days before the Food and Drug Administration approved Abbott's coronavirus test for hospital use.

"That's a whole new ballgame," Trump said. "I want to thank Abbott Labs for the incredible work they've done. They've been working around the clock."

Abbott's shares had plummeted with the general market downturn, but the stock quickly recovered and soared.

Along with the Abbott buys, Saul made a string of investments in the insurance company UnitedHealth in late January and March. Though he entered the administration with investments in the company, he did not make any market moves until late January, as administration officials were behaving one way about the virus in private and another in public.

The Social Security Administration did not publicly address the coronavirus threat until mid-March, when it announced it would discontinue in-person services. Saul released a statement that month saying the pandemic would not affect benefits, but an agency report released April 22 projecting the expiration date of the program's fund did not account for the contagion's impact, which shaved several years off the timeline.

On Feb. 7, Saul invested in a company he had not previously: Eurofins Scientific, a medical lab company headquartered in Luxembourg that manufactures PPE. He put between $15,001 and $50,000 into Eurofins that month, then sold an unknown amount, amid widespread outcry about shortages, on March 31.

(In a Rose Garden address the previous day, Trump featured MyPillow CEO Mike Lindell among a number of business leaders who affirmed they were scrambling to address PPE shortages.)

Saul furthered his investment in a company called ServiceNow in January. He dropped an additional $50,001 to $100,000 into the cloud computing company that manages digital workflows on Jan. 21, one week before the company announced a major acquisition.

In April, a document circulated among officials at the Department of Health and Human Services and the Federal Emergency Management Agency revealing that state and local public health labs were set to receive only 5,500 of Abbott's short-term "ID NOW" tests. That number fell well short of the "about 500,000 capacity of Abbott tests" which Dr. Deborah Birx, the White House coronavirus response coordinator, had said were in the states but "not being utilized."

It was unclear at the time whether Dr. Birx was referencing the ID NOW test or a slower, prior generation of Abbott test. In an email, Abbott said she was referring to the latter. Salon has reached out to Birx's office for clarification.

In announcing the new short-term test on March 27, Abbott said it was "ramping up production to deliver 50,000 ID NOW COVID-19 tests per day." The tests did not deliver, however, with the FDA issuing a warning about the accuracy of the tests in mid-May following a study which found that the tests missed about half of positive cases.

It is not clear how Saul's investment patterns may have changed since April. He did not respond to Salon's request for comment.