Without benefits or unemployment, gig drivers are struggling to make it — so they took their grievances to the top 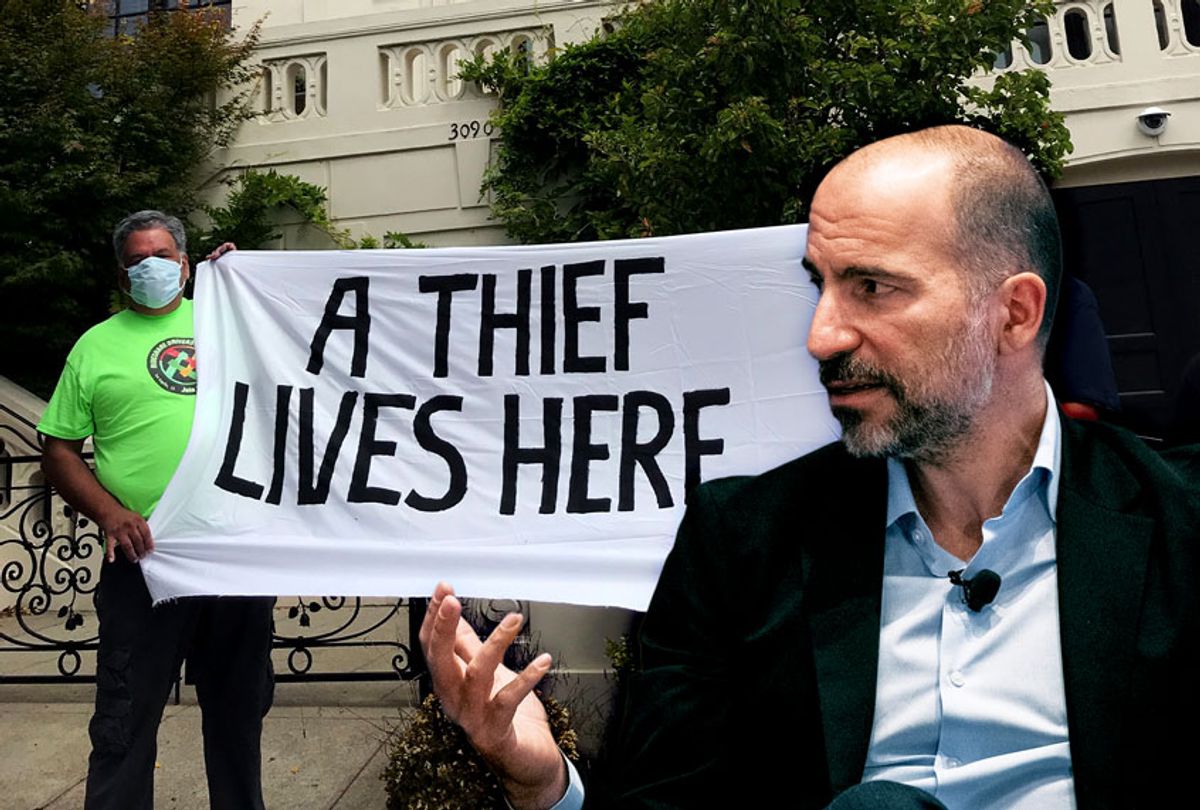 San Francisco, Calif. — On Wednesday morning, a caravan of around 50 Uber and Lyft drivers cruised down a quiet street in San Francisco's ritzy Pacific Heights' neighborhood and parked in front of Uber CEO Dara Khosrowshahi's home. One white van with a "Black Lives Matter" sign draped over the roof blasted Dolly Parton's working-class anthem "9 to 5" from their speaker system. A woman who joined the protest on foot held a sign declaiming how Uber owes her $90,000 in back wages. Two protesters held a banner reading "a thief lives here."

But for the hour-and-a-half that drivers spoke, chanted and honked, the "thief" in question was nowhere to be found.  "We want Dara," one protester shouted, in front of his four-story home.

Drivers filled the void of Khosrowshahi's absence with speeches that boiled down to one core message: the exploitation of app-based drivers has gone too far. The protest, organized by Gig Workers Rising and We Drive Progress, arrives at a moment in which the pandemic, Uber's disinformation campaign in response to Assembly Bill 5, and racial and economic inequalities have pushed drivers to a tipping point. While the drivers wanted to get Khosrowshahi's direct attention, they did have a list of specific demands, including the provision of personal protective equipment (PPE) for drivers.

Alan Franklin, who has driven for Uber and Lyft for the last three years, told Salon he joined the protest in part to bring credibility to the work drivers do. The boss, Franklin explained, "seems to maybe have forgotten that we are his bread and butter."

"We were promised things to protect us and our passengers, known as PPE, such as hand sanitizer, possible screens to set that six-foot distance, and none of those things were ever given to us," Franklin said, adding that as business declined, driver safety seemed to get left behind. "Our safety became, not second place, not third place, but just dead last."

As shelter-in-place started to ripple across the country, Uber closed its Greenlight Hubs, facilities where drivers can go to get in-person help. Their closure left many in the dark when they faced bureaucratic or financial hurdles as a member of Uber's contract workforce.

Uber claims to have distributed PPE as of mid-May to at least 450,000 drivers, but many of the drivers at Wednesday's protest said they had seen no evidence of that. Salon contacted Uber for a comment, but didn't receive a response regarding PPE. Amid the pandemic, there have been a few reports of drivers dying of COVID-19. Assembly Bill 5, which goes into effect this year, is supposed to turn Uber's driver-contractors into workers and provide them with better benefits. Yet currently, Uber's drivers aren't paid sick days nor given health insurance coverage.

"We were promised PPE and that PPE was never delivered," Franklin said.

Cherri Murphy, social justice minister in the East Bay and leader at Gig Workers Rising, who has been driving for Lyft for three years, said she joined the protest in solidarity with Uber drivers to demand that Uber drops a ballot measure that would exempt app-based drivers from California's Assembly Bill 5 (AB 5). While AB 5 mandates Uber and Lyft to make drivers W-2 employees, both companies have instead manipulated the job criteria of their drivers to strengthen the argument that they're independent contractors instead.

Uber and Lyft are at the helm of an astroturf coalition called Protect App-Based Drivers & Services, along with DoorDash, Postmates and Instacart. They have collectively spent a reported $110 million on the initiative to avoid having to convert their workers to employees and thus pay them standard benefits.

Murphy told Salon that before the pandemic, driving for Lyft was already like "rubbing two pennies together, trying to make ends meet."

"The pandemic really exposed a lot of systemic issues, particularly [with] Black Lives Matter," Murphy said, adding that Uber and Lyft's hollow solidarity statements do not match their actions. "If you believe that Black lives matter, then drop the ballot measure and do what you're supposed to do."

"We're out here in front of this $16.5 million house, while they're living comfortably and we're out here fighting [to] secure our bills and have a place to live," Murphy explained to Salon.

Hector Castellanos, a Bay Area driver for Lyft and Uber and leader with We Drive Progress, told Salon drivers are horrified that Uber has spent millions on the ballot initiative when they could have spent it on PPE, unemployment, or other benefits for employees. As Salon has previously reported, many Uber and Lyft drivers haven't received unemployment benefits for obscure reasons — either the state's fault, or Uber and Lyft's fault, depending on one's interpretation as to whether they're employees or independent contractors. For Castellanos, the current crisis is reminiscent of a personal crisis he experienced a few years ago.

"A few years ago, I have shoulder surgery and I have eight months without working, and I didn't receive anything from this company," Castellanos told Salon. "My daughter was in school and she had to drop out of school to help me with the house payments and everything."

Drivers weren't the only attendees. San Francisco Supervisor Gordon Mar showed support on behalf of the city's board of supervisors.

"It's more important than ever for these corporations to do the right thing, and more importantly to follow the law and properly classify their workers, but unfortunately they're doing the opposite, they're doubling down on their illegal business practice," Mar told Salon.

Legislative solidarity emerged from outside of the protest. Around the same time the protesters disbanded, news broke that California is seeking to force Uber and Lyft to reclassify their drivers.

Drivers who spoke with Salon said they will keep fighting until November.

As the planned protest drew to a close, drivers wrote their grievances on paper and taped it to Khosrowshahi's gate. A banner that read, "Drop the ballot measure" blocked the driveway. Another, smaller sign read: "Dara, today we come with cars, tomorrow we come with pitchforks."