In the episode "BMO," one space station learns that power can be shifted, even if you're just a young kid or robot 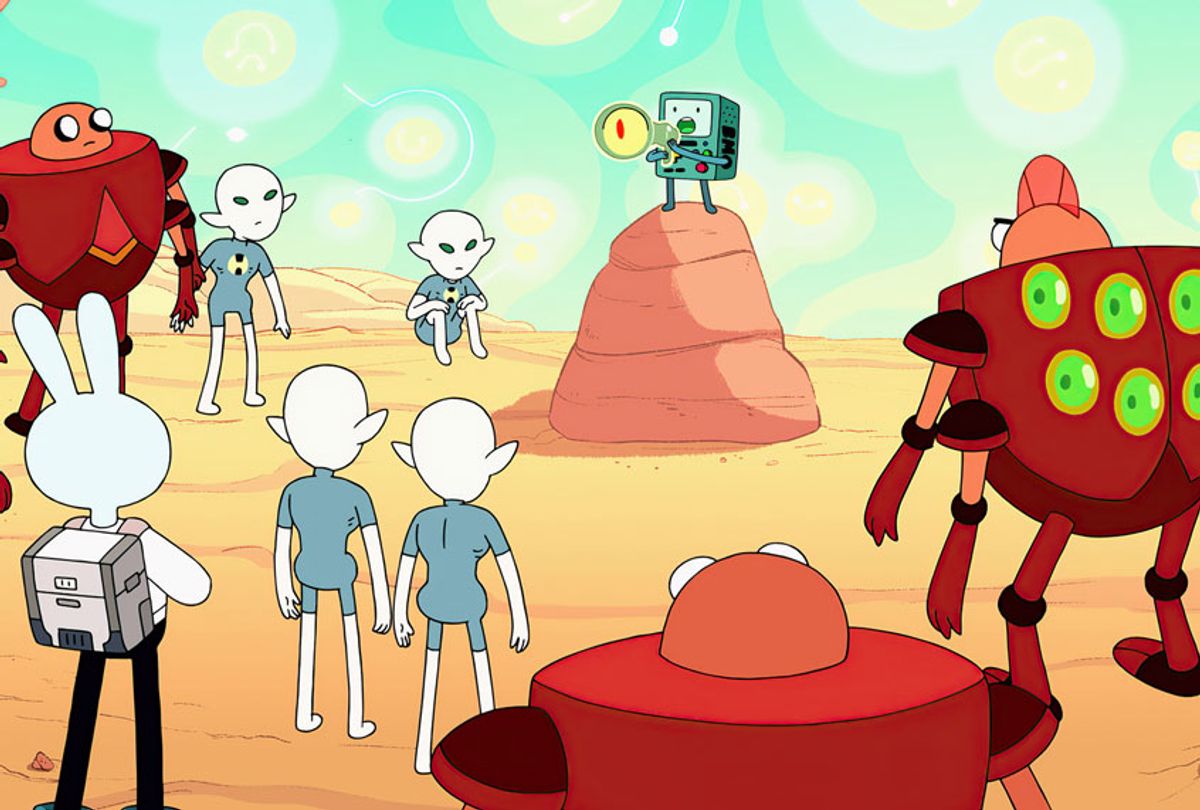 The "Adventure Time" creators maintain that BMO is a robot and therefore does not have a gender. In past episodes Finn calls BMO "her" and "m'lady," and in others he refers to BMO as a "him." For the purposes of this piece, we won't impose a gender on BMO and instead use the pronouns "they/them."

While watching the first installment of HBO Max's four hour-long specials "Adventure Time: Distant Lands," based on Pendleton Ward's fantasy animated series that ran on Cartoon Network, I was reminded of an episode from the show's fifth season. In the episode titled "BMO," the sentient gaming console voiced by Niki Yang accidentally deletes their entire coresystemdrivers.sys during a round of routine maintenance. In order to operate as normal, BMO explains to Finn (Jeremy Shada) and Jake (John DiMaggio) that they'll need to trek out to the MO factory where BMO was "born."

Disguises are donned and shenanigans ensue, until BMO is finally reunited with their creator, Moseph "Moe" Mastro Giovanni, who proceeds to fix them. Moe reveals that BMO is very special. They were built as a companion for the child he never ended up having.

Moe explains, "I made BMO to be more."

In "Distant Lands," helmed by executive producer Adam Muto, BMO fully embraces that element of their design in their own special way. After 10 seasons of serving as a sidekick to Finn and Jake (albeit it an incredibly adorable and well-loved one), BMO steps into the role of hero by fighting the power of a broken system led by a corrupt ruler — a narrative that is both universally timeless and incredibly timely.

BMO is happily shuttling through space armed with potatoes — and a song about potatoes: "They're better than tomatoes!" — on a mission to terraform Mars when they're suddelny thrown off course. BMO ends up on The Drift, a debilitated space station powered on-and-off by questionable energy sources and inhabited by colonies of scavengers. Watch the first four minutes below:

The society is built on selling bits of valuable scrap to Hugo (Randall Park), a sketchy former Earthling who masterminds many of The Drift's mechanisms. BMO's crash-landing destroys some valuable scrapping equipment that two groups – The Great Elves and Shell People – are feuding over, which then turns the conflict on BMO.

Before they can retaliate, BMO is swept up by Y4 (later renamed Y5), a young bunny-like creature (Glory Curda), who initially contemplates selling them to Hugo. But after BMO's quick thinking helps residents repair a breach and earns them the self-styled title of sheriff, Y5 decides to become their playmate/deputy.

Together, they spend their days assisting Drift residents with day-to-day disasters – like saving space beetles from drowning or wrangling space lard – while Y5 is visibly weighed down by a sense of impending doom, as well as the vocal disapproval of her parents, who work for Hugo. As The Drift is becoming more and more unstable, it becomes increasingly apparent that Hugo is less of a reliable leader and more of a smarmy politician using the labor of the station's residents for his own selfish gain.

Inevitably, Y5 has to determine her own loyalties, while BMO remains undeterred from fighting against the injustice at play on The Drift.

"Even when things look really, really stupid, we still have to try," BMO says.

In this case, what is viewed as "stupid" on The Drift is voicing dissent — especially as a child or a member of a marginalized community — even when the people around you are apathetically falling in line.

And in this world, that so-called stupidity ultimately makes a big difference.

"Adventure Time" has always succeeded in communicating a message without being moralistic, and this installment of "Distant Lands" is no different. This is partially because of, despite the absurdist environments, the show's very real depiction of human behavior and political machinations. When I watched Hugo boarding an escape pod despite cries of injustice, I couldn't help but think of Donald Trump retreating to the White House bunker while thousands took to the streets to protest racial inequality.

But just because "justice," however you define it, may not be immediately achieved, "Distant Lands" shows, through its depiction of BMO, that it's still something for which people should fight. "This robot expends energy in ways that yield it no benefit," observes Y5 at one point, perfectly encapsulating the generous heroism woven throughout the "Adventure Time" canon.

It's an almost childishly idealistic way to approach the universe, but after watching "Distant Lands," I realize that our world needs more BMOs because by embracing the philosophy to "be more," change can happen.

The first installment of "Adventure Time: Distant Lands" is available to stream now on HBO Max. No release date has been announced for the following specials.