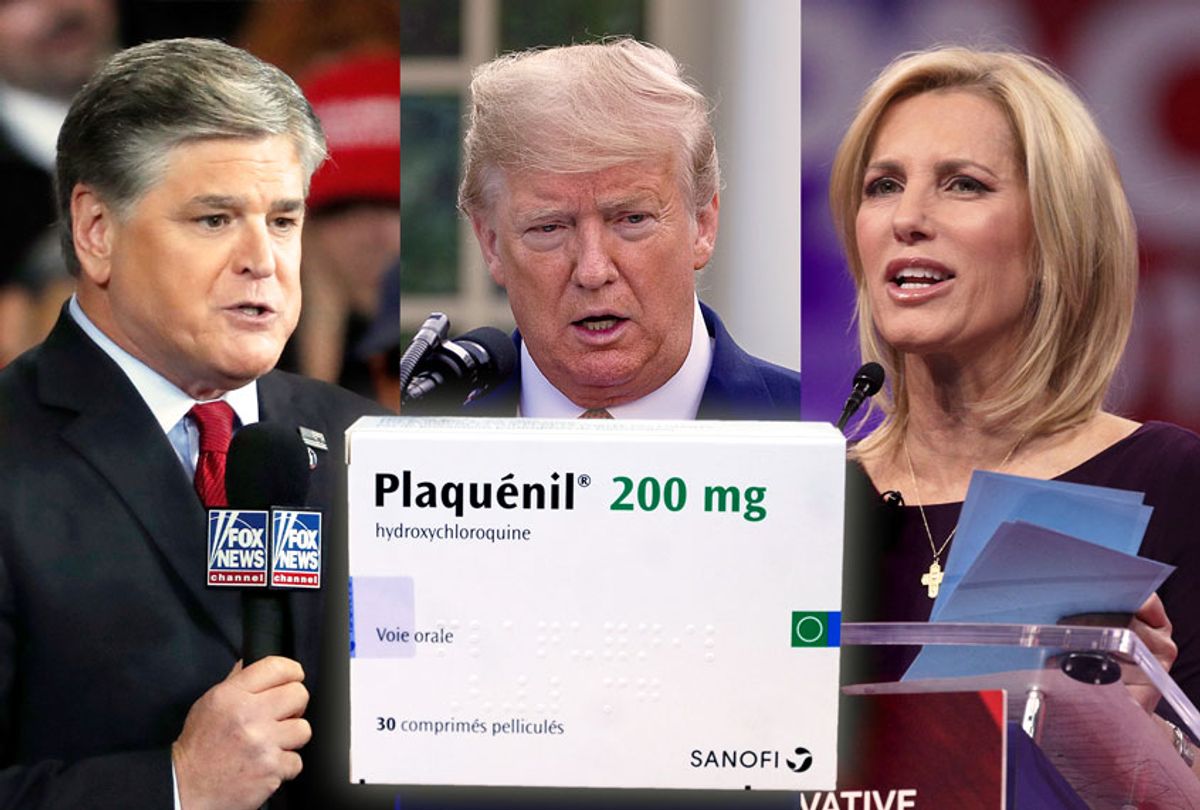 Although some GOP governors have joined their Democratic counterparts in aggressively promoting social distancing during the coronavirus pandemic — including Maryland's Larry Hogan and Massachusetts' Charlie Baker — President Donald Trump and much of the right-wing media, from Fox News to AM talk radio, have failed to take the crisis seriously. And according to Washington Post reporter Christopher Ingraham, some recent studies offer a damning indictment of right-wing media coverage of the pandemic.

"In recent weeks," Ingraham explains, "three studies have focused on conservative media's role in fostering confusion about the seriousness of the coronavirus. Taken together, they paint a picture of a media ecosystem that amplifies misinformation, entertains conspiracy theories and discourages audiences from taking concrete steps to protect themselves and others. The end result, according to one of the studies, is that infection and mortality rates are higher in places where one pundit who initially downplayed the severity of the pandemic — Fox News' Sean Hannity — reaches the largest audiences."

One of those studies was published by the Harvard Kennedy School Misinformation Review, whose chief editor, Irene Pasquetto, told the Times, "We are receiving an incredible number of studies and solid data showing that consuming far-right media and social media content was strongly associated with low concern about the virus at the onset of the pandemic."

The Harvard Kennedy School Misinformation Review published a study conducted by Dolores Albarracin of the University of Illinois at Urbana Champaign and Kathleen Hall Jamieson of the Annenberg Public Policy Center. Ingraham says that Albarracin and Jamieson "found that people who got most of their information from mainstream print and broadcast outlets tended to have an accurate assessment of the severity of the pandemic and their risks of infection. But those who relied on conservative sources, such as Fox News and Rush Limbaugh, were more likely to believe in conspiracy theories or unfounded rumors — such as the belief that taking Vitamin C could prevent infection, that the Chinese government had created the virus, and that the U.S. Centers for Disease Control and Prevention was exaggerating the pandemic's threat 'to damage the Trump presidency.'"

A working paper on right-wing media and coronavirus was posted by the National Bureau of Economic Research. According to Ingraham, the authors of that paper "used anonymous location data from millions of cell phones to explore how the popularity of Fox News in a given zip code related to social distancing practices there. By March 15, they found, a 10% increase in Fox News viewership within a zip code reduced its residents' propensity to stay home, in compliance with public health guidelines, by about 1.3 percentage points."

"The effect that we measure could be driven by the long-term message of Fox News, which is that the mainstream media often report 'fake news' and have a political agenda," Andrey Simonov, lead author of that study, told the Times. "This could result in lowering trust in institutions and experts, including health experts in the case of the pandemic."

Ingraham also reports that a working paper by economists at the University of Chicago and other places "finds that Fox News viewers are less likely to comply with public health guidelines than consumers of other media. But their paper takes the analysis two steps further: it finds that Fox viewers aren't a monolith, with fans of some media personalities acting distinctly from others. It also provides evidence that those behavioral differences are contributing to the spread and mortality rate of COVID-19 in certain areas."