Summer is a time to keep things simple in the kitchen, and this recipe allows the favors of the season to shine 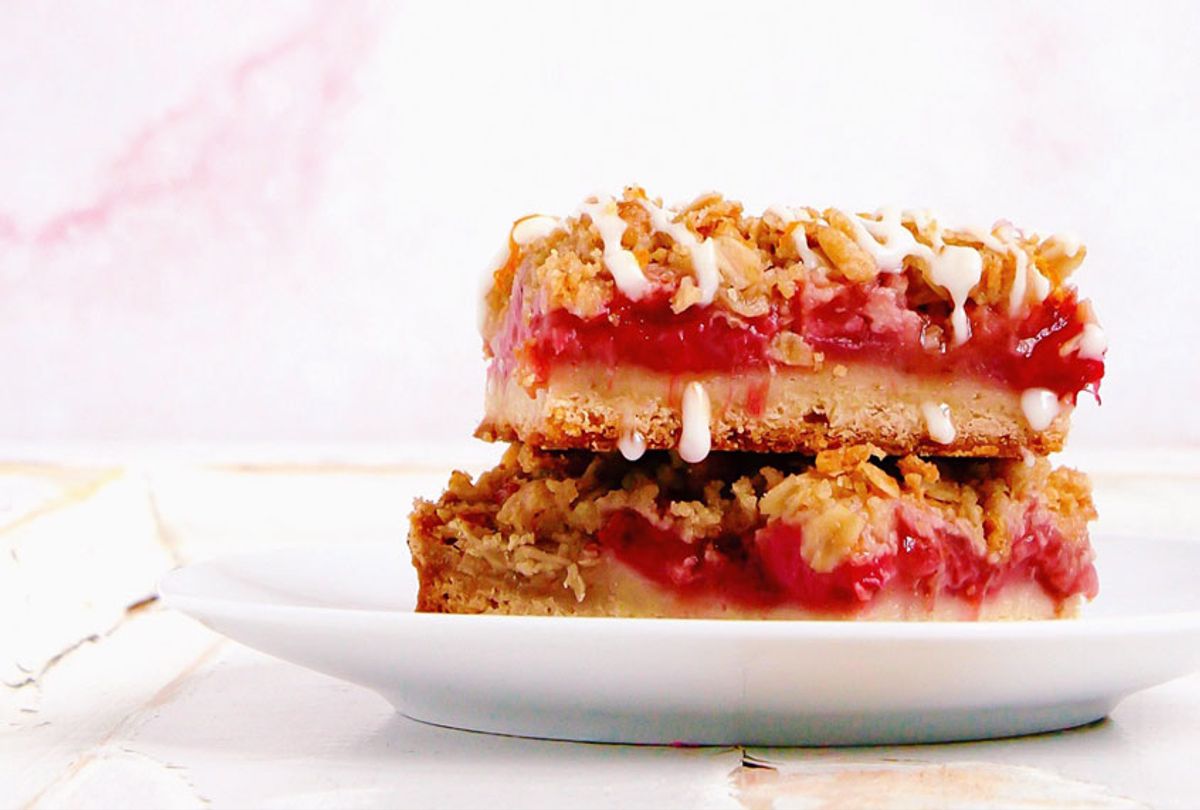 The apple crisp cheesecake bars from Buttercream Blondie owner Meghan McGarry were one of the most popular recipes of 2019 featured on Salon Food. The new makeover the pastry chef gave to the apple crisp took a classic dessert soaring to new heights. A splash of whiskey added an extra punch of fall comfort, creating hand-held boozy treats.

"They're my version of that classic fruit in bar form," McGarry tells Salon Food. "I'll have a little piece for breakfast or a square for snack. It's totally acceptable to eat dessert all day if it's in bar form, right?"

RELATED: These spiked apple crisp cheesecake bars are a hit even if it's not fall

Rhubarb hits farmers markets before peaches and other stone fruits steal the spotlight as they ripen in late summer. It's one of the pastry chef's all-time favorite fruits to incorporate into dessert. McGarry likes to keep it simple this time of year, and this is one recipe that allows the favors of the season to shine.

"These bars are perfect for people who may not be familiar with rhubarb or are perhaps on the fence about it," McGarry says. "It's a great starter recipe, because they're made in combination with strawberries, which provide a sweet contrast to the brightness of the rhubarb. It's really the perfect pairing."

RELATED: You can bake this quick loaf with ingredients on hand in your pantry, because substitutions are easy

McGarry also adds bourbon to these bars, though this time she goes with a rye whiskey pairing. The end result tastes as if a fruit crisp had a chance meeting with an old fashioned cocktail.

"I used rye whiskey here, because it has a fruity and almost spicy undertone which ups the cozy factor right from the start," she says.

Like the apple crisp bars, these also begin with the brown sugar shortbread crust Salon Food fans know and love. As the shortbread crust browns in the oven, bakers shift to making McGarry's classic crisp topping loaded with butter and oats. Immediately pop the crisp into the fridge before you move on to make the filling, because you want it to be as cold as possible once it finally hits the fire.

RELATED: Ditch the glass: Upgrade your go-to margarita to the perfect summer dessert

The flavors of the mixed fruit and granulated sugar in the strawberry rhubarb filling are rounded out by orange zest and the rye whiskey. The very last step is to assemble the filling, and the emphasis is on last. When you add granulated sugar to the fruit, it starts to release juice. This is one time where you don't want that to happen.

While the strawberry rhubarb crisp bars taste fine on there own, you can kick them up a notch by making a rye whiskey glaze. Whether you finish the bars off with the glaze or just top them with a scoop (or two or three) of vanilla ice cream when you serve them after a meal, both say summer. Adults who may want an after-dinner drink can also pair it with an old-fashioned fashioned. With this dessert, there's really no way to go wrong.

While you're popping open a bottle to make these boozy baked goods, pour yourself a beverage, too. At Salon Food, we're fans of this stainless steel cocktail bar, which stores 11 tools in one place. Next time your friends unexpectedly knock on your door, you'll be able to mix up a decadent cocktail in the blink of an eye.