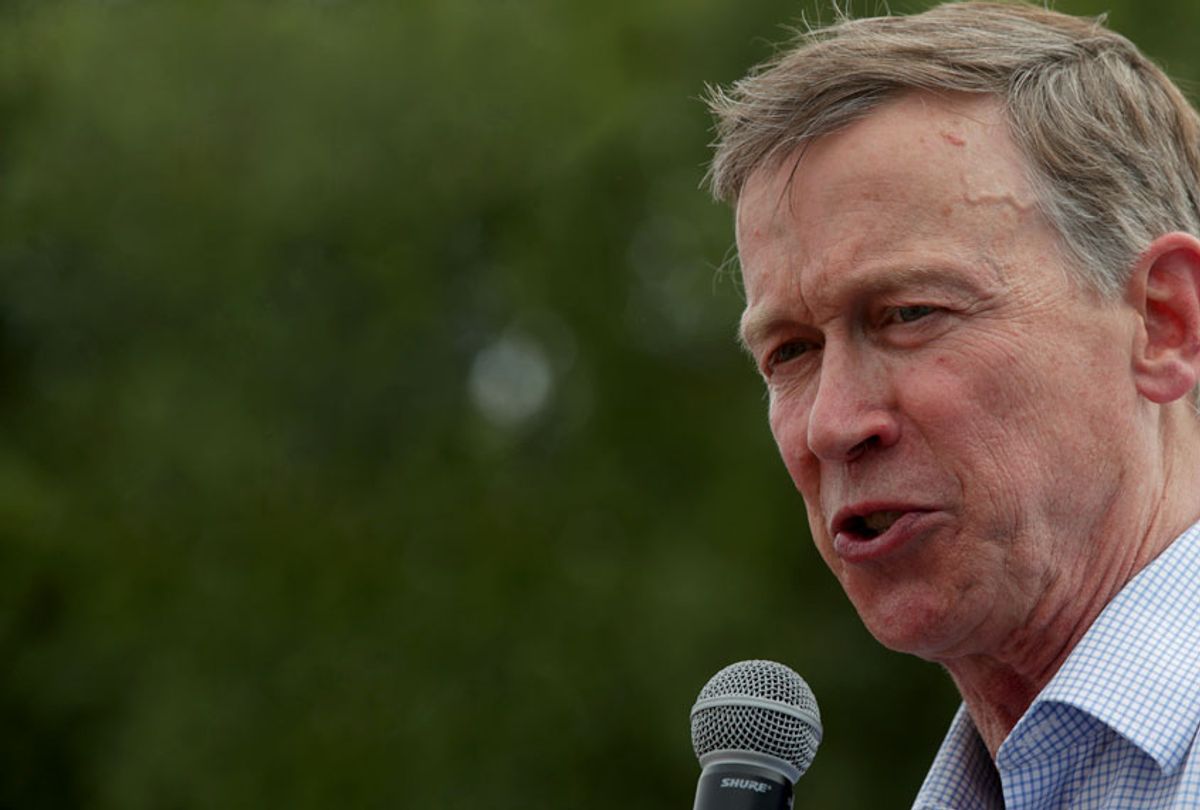 A group of Indigenous women and their allies issued a public letter Saturday urging former Colorado Gov. John Hickenlooper to withdraw from the state's Democratic Senate primary over his involvement in an event in which participants dress in imitative Native American garb.

"This sort of red face racism has no place in our politics," tweeted journalist Julian Brave Noisecat.

The letter cites multiple appearances by Hickenlooper at the One Shot Antelope Hunt in Wyoming, an event where participants compete to see who can fell an antelope in one shot. The winners dress in an imitation headdress while the losers dress as so-called "squaws," a racist term for Indigenous women.

"Gov. Hickenlooper displayed an unacceptable lack of judgement in choosing to participate in this event, while disrespecting Indigenous women and appropriating traditional dress of Native peoples," says the letter.

The letter's primary signatories are Tara Houska of the Couchiching First Nation Anishinaabe, Amanda Blackhorse of the Diné, Tokata Ironeyes of the Hunkpapa Lakota, Lyla June Johnston of the Diné/Tsétsêhéstâhese, Kandi White of the Mandan, Hidatsa, and Arikara, Ann Abeyta of the Enrolled Eastern Shoshone and Joye Braun of the Cheyenne River Sioux.

A number of groups, including Sunrise Movement, Converge Colorado and the Indigenous Environmental Network joined the letter, as well as allies like Keep It in the Ground campaigner Dallas Goldtooth of the Dakota Nation and Mexica hip-hop artist and climate activist Xiuhtezcatl Martinez.

As the New York Times reported Saturday, Hickenlooper has made a number of comments that have led critics to question his views on race:

In a series of forums and debates with his opponent, Mr. Hickenlooper, 68, made several eyebrow-raising statements. He said that George Floyd, the black Minneapolis man who died after a police officer knelt on his neck, had been shot. In response to a question about the Black Lives Matter movement, Mr. Hickenlooper said that every life matters, a comment considered dismissive of legitimate black grievances. He later acknowledged that he fumbled his response.

Then a six-year-old video surfaced of Mr. Hickenlooper comparing the rigors of a politician's schedule to working on a slave ship, a remark critics cited as painfully insensitive. He again apologized.

The letter cites those instances, noting that Hickenlooper's participation in the Wyoming event is part of a pattern for the former governor of disregarding the interests of people of color both in his comments and the environmental policies he supported as governor.

"These actions are not missteps," reads the letter. "They are not one-time, isolated incidents."

"Instead, they are part of a disturbing pattern of ignorant and harmful behavior spanning over a decade," the letter continues. "These racial and social justice problems are compounded by Gov. Hickenlooper's unwavering support for fracking, and the environmental racism his administration engaged in during his tenure as governor."

Activists on Sunday wondered if Hickenlooper would retain the support of Democratic lawmakers like Sens. Elizabeth Warren, D-Mass., and Cory Booker, D-N.J., both of whom endorsed the former governor's run for Senate on June 20.

"This is disgraceful and I hope Elizabeth Warren will consider retracting her endorsement of John Hickenlooper," People for Bernie founder Winnie Wong said on Twitter. "Coloradans deserve better."

As of press time, neither Warren nor Booker's endorsement had been rescinded.

Former primary candidate Lorena Garcia tweeted that though her comment should not be seen as an endorsement, she could not see Hickenlooper's primary opponent Andrew Romanoff taking part in such an event.

"This is absolutely horrendous," Garcia said of the photos. "It is shameful."