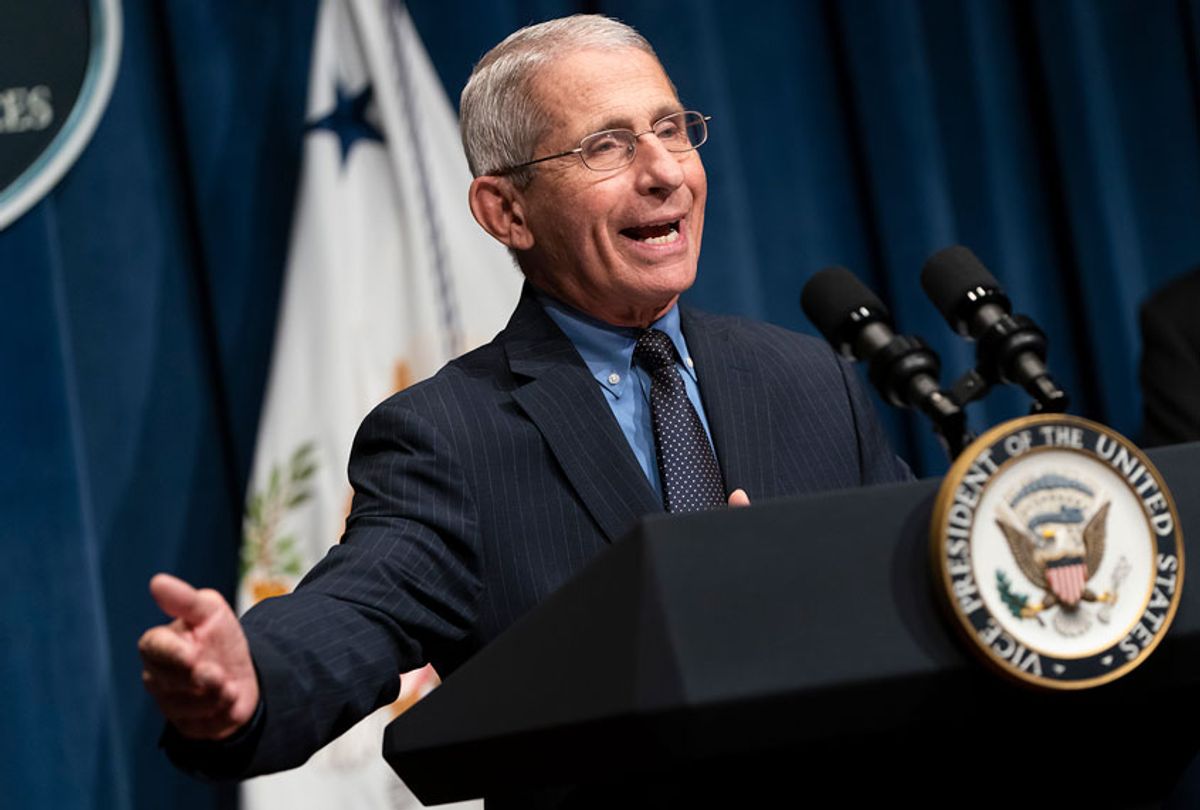 Director of the National Institute of Allergy and Infectious Diseases Anthony Fauci speaks after a White House Coronavirus Task Force briefing at the Department of Health and Human Services on June 26, 2020 (Joshua Roberts/Getty Images)
--

Dr. Anthony Fauci, director of the National Institute of Allergy and Infectious Diseases, told the Aspen Ideas Festival on Sunday that there is a serious risk that the U.S. population will fail to develop herd immunity against the coronavirus if too many people refuse to be vaccinated.

During the interview Fauci said that he would "settle" for a coronavirus vaccine that is only 70 to 75 percent effective, since that "would bring you to that level that would be herd-immunity level." When a questioner asked if this would be the case even if one-quarter of the population refused to be vaccinated, Fauci replied that was "unlikely."

"That's one of the reasons why we have to make sure we engage the community as we're doing now, to get community people to help us, for people to understand that we are doing everything we can to show that it's safe and that it's effective and that it's for the good of them as individuals and in society to take the vaccine," Fauci explained.

He added that the federal government has "a lot of work to do" to encourage people to get vaccinated and added that "there is a general anti-science, anti-authority, anti-vaccine feeling among some people in this country, an alarmingly large percentage of people, relatively speaking."

Dr. Georges C. Benjamin, executive director of the American Public Health Association, told Salon by email that Fauci's assessment was "possibly correct." He continued, "The debate rages about if herd immunity is 50 percent or 70 percent of the public for this disease. I am in the 70 percent camp."

Benjamin added that "antivax folks are actively discouraging people from getting the vaccine and I think everyone is worried that we are not promoting vaccination enough." History suggests "it takes a while to convince people" when a new vaccine reaches the public" and in that sense Fauci's concerns are "nothing new," he said.

Medford added that he felt Fauci's concerns were well-founded, given the likelihood that a coronavirus vaccine will not be 100 percent effective and the fact that most polls find a substantial percentage of Americans would resist getting vaccinated.

In short, even with a 100 percent effective vaccine, we would not achieve the 70 percent target needed for herd immunity. With a less effective vaccine, many more than 66 percent of Americans would have to be vaccinated. Dr. Fauci's comment that he would "settle" for a coronavirus with 70-75 percent effectiveness must be viewed in the context that this requires near 100 percent vaccination of the US population through education and consistent, pro-active science-based messaging and leadership at the local, state and national levels.

A survey taken last month by The Associated Press–NORC Center for Public Affairs Research revealed that 49 percent of respondents said they would get a vaccine for the coronavirus, with 31 percent saying they were not sure and 20 percent saying they absolutely would not do so. An overwhelming majority of respondents, 79 percent, said that the presence of a vaccine would help them determine whether businesses and activities should resume in their communities. Among that group, 65 percent said they would get a vaccine as soon as one became available.

A poll taken earlier this month by The Washington Post and ABC News had slightly more encouraging findings. It revealed that 71 percent of Americans definitely or probably would get a coronavirus vaccine if one became available, compared to 12 percent saying they probably would not and 15 percent saying they definitely would not. The same survey found that the rates of vaccine willingness was strongly linked to partisan affiliation: Only 17 percent of Democrats said they would not get vaccinated, compared to 25 percent of independents and 40 percent of Republicans.