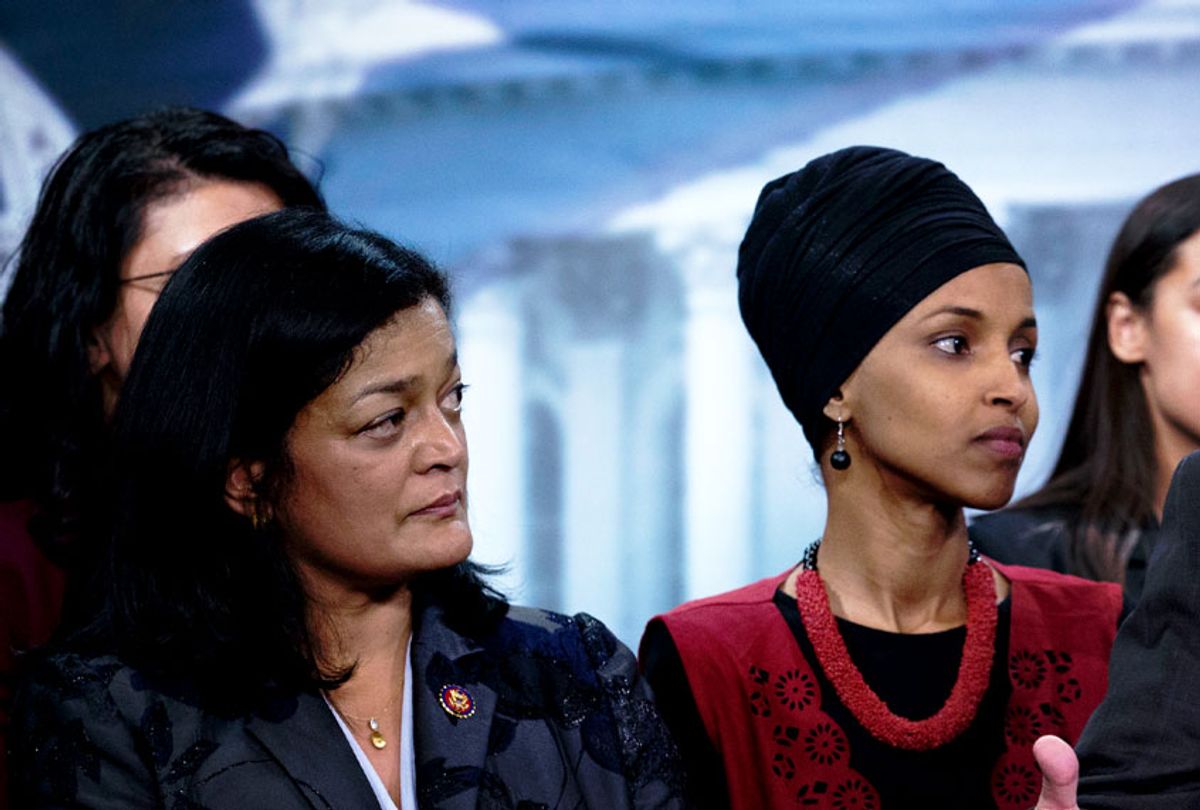 Peace and justice advocates are praising a letter from a dozen House Democrats urging that further military aid to Israel be conditioned on the state not annexing larger swaths of the occupied West Bank and calling on Congress to ensure the human rights of the Palestinian people be respected.

"Our generation of American Jews are clearly encouraged by the progressive leadership of the members of Congress on this letter, who are modeling what it means to fight tooth and nail against annexation, and for the dignity and security of both Palestinians and Israelis," Emily Mayer, political director for IfNotNow, said in a statement.

The letter — spearheaded by Reps. Pramila Jayapal, D-Wash., Betsy McCollum, D-Wash., and Alexandria Ocasio-Cortez, D-N.Y., and addressed to Secretary of State Mike Pompeo — declares that if Israel goes forward with its controversial annexation plans, the lawmakers on the letter "will work to ensure non-recognition of annexed territories as well as pursue legislation that conditions the $3.8 billion in U.S. military funding to Israel to ensure that U.S. taxpayers are not supporting annexation in any way."

"It's critical that the United States take a clear stand and fully condemn any move by Israel to dangerously and illegally annex occupied Palestinian territory," Jayapal said in a statement.

Sen. Bernie Sanders, I-Vt., also signed the letter, saying in a statement that "American taxpayers shouldn't be supporting policies that undermine our values and interests, in Israel, in Palestine, or anywhere."

"At a time when Americans are taking to the streets to demand justice and equality before the law, we in Congress have a responsibility to oppose systemic injustice abroad," said Omar. "Unilateral annexation is a violation of international law, a violation of Palestinian human rights, and directly counter to American values of democracy and self-determination."

Tlaib charged that Israel is using U.S. funding to further its goal of an ethno-supremacist state.

"The Netanyahu government receives $3.8 billion in U.S. taxpayer-funded military handouts every year and with the backing of the impeached president, they are seeking to use that money to formalize an apartheid system," said Tlaib. "The implementation of that system would mean our tax dollars — instead of being used to fund health care or replace lead water pipes — would be used to perpetuate and entrench human rights violations in Palestine, including limitations on freedom of movement, further expansion of illegal land theft, home demolitions, and cutting off access to critical resources like clean water."

The letter is, unsurprisingly, opposed by lobbying group AIPAC, which tweeted that the proposal "explicitly threatens the U.S.-Israel relationship in ways that would damage American interests, risk the security of Israel & make a two-state solution less likely."

But 20 groups including IfNotNow, CODEPINK, Jewish Voice for Peace Action, Defense for Children International-Palestine and the Center for Constitutional Rights expressed their support for the letter.

"As the people rise up across this country in protest of systemic anti-Black racism and demand a fundamental reprioritization of public investment — defunding police and investing in community safety and wellbeing — we must also work to ensure U.S. taxpayer funds are not perpetuating gross violations of human rights abroad," said Nadia Ben-Youssef, advocacy director for the Center for Constitutional Rights, in a statement.

"We support actions by members of Congress that align U.S. foreign policy with their values of human rights, equality and self-determination, working to hold powerful actors accountable and taking necessary steps towards historic justice for Palestinians," Ben-Youssef added.

Rebecca Hornstein, a rabbinical student who was one of the organizers behind a letter from alumni of various Jewish institutions supporting the lawmakers, said that with more than 400 signatures, the alumni letter "shows that the future leadership of our community is ready to support real action that will hold the Israeli government accountable."

"The time for empty rhetoric is over," said Hornstein, "the time for real action is now."