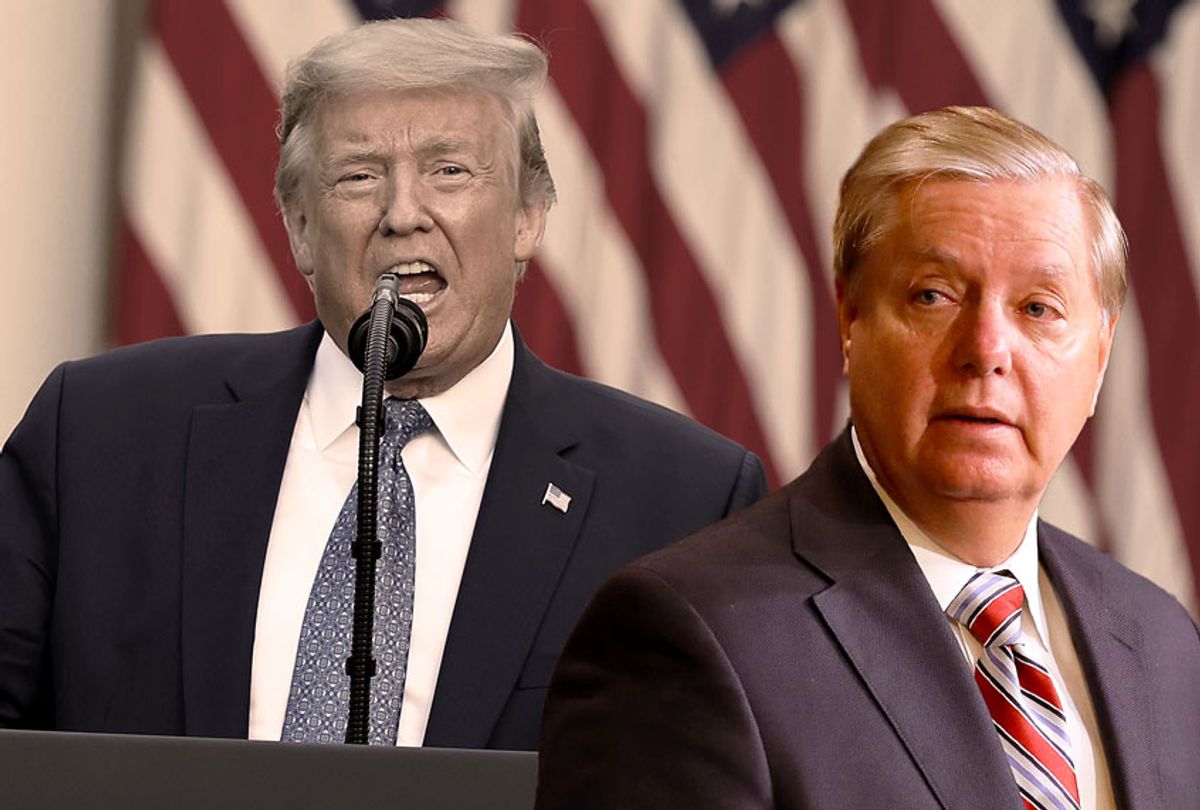 As the coronavirus pandemic spread and death tolls increased across the United States over the last three months, Sen. Lindsey Graham, R-S.C., repeatedly raised the number of deaths he would find acceptable in defense of President Donald Trump's botched response.

The longtime senator, who now chairs the Judiciary Committee, has unexpectedly found himself in a dead heat with Democratic challenger Jaime Harrison, and Graham's obsequious praise of Trump throughout the coronavirus pandemic might be to blame.

Graham — who had to self-quarantine after he was exposed to the infection during a visit to Trump's Palm Beach club, Mar-a-Lago — initially downplayed the new coronavirus, inaccurately comparing it, as Trump did, to the flu in a March 3 interview with Carolina Connection, a South Carolina TV station.

Days later, however, Graham tried a new tack, lauding Trump as a "wartime president" on the president's favorite morning show, "Fox & Friends." Graham also blamed the media for overhyping the threat and covering the pandemic like "a series of plane crashes," while himself comparing the pandemic to the September 11 attacks.

"The impeachment debacle has been replaced by the spirit of 9/11," he said. "I think America is under attack. It's under attack by a virus that can be destroyed if we stay away from each other."

On April 7, Graham told Fox News' Martha MacCallum that he would consider Trump's performance a success if COVID-19 deaths stayed under the 50,000 mark.

Graham, in an April 9 appearance on Sean Hannity's Fox News program, told the host it was time to "get the United States Senate on the record" in officially pinning blam on China for the public health and economic devastation that the pandemic had wrought.

"We don't blame Trump, we blame China," Graham said, echoing almost verbatim the GOP talking points circulated in a memo to all Republican senators, advising them on how to distance themselves from the president.

"The president in my view has avoided 2.2 million Americans from dying because he rejected the herd theory, let it run through the society, we'll build up immunity. Thank God he rejected that. Under the best scenario we are looking at 100,000 to 240,000 deaths," he told Fox Business' Maria Bartiromo. "I think we are going to beat that.'"

About ten days later, the death toll cleared the 50,000 metric Graham had established earlier that month.

Then in May, the South Carolina Republican emphasized again that the historic economic crash did not reflect Trump's failures, but Trump's noble prioritization of human lives. The staunch abortion opponent coyly attributed this to what he called Trump's "pro-life" stance in a May 5 appearance on "Washington Watch with Tony Perkins."

"Look, 70,000 people [have] died with us locking the whole world down, so the president put life — he is pro-life in the real sense of the word — he put life ahead of his economic success. The economy came to a grinding halt — not because of anything bad about the economy — to save lives. Now we're trying to balance how to turn it on," said Graham. "I think he's done a really good job.'"

Two days later, Graham told reporters during a visit to a chemical plant in his home state that reopening the economy would be "the only answer that's sustainable," even though it would likely only lead to a spike in cases.

By late May, however, as states began reopening in earnest, Graham was forced once again to raise his high-water mark — this time from 100,000 to 130,000 deaths, per Politico.

Around that time, the actual death count also surpassed the 100,000 mark, which Graham grieved as a "sad milestone" in a Facebook post.

"Our nation has been hit hard by the coronavirus and today we passed a sad milestone of 100,000 deaths. I'm convinced that if we had not engaged in aggressive mitigation practices the number would be much greater. The sacrifices we made as a nation has saved lives [sic]," he wrote.

"More than 120,000 Americans have died from COVID-19, yet Lindsey Graham continues to spin and distract from his failure to hold the federal government accountable for bungling its response," said Zach Hudson, spokesperson for American Bridge, a PAC that supports Democratic candidates and causes. "Lindsey Graham is more concerned about booking his next television appearance than helping his constituents suffering from this pandemic,"

As of Wednesday, the U.S. has reported at least 128,000 deaths attributed to the coronavirus, according to the latest data from Johns Hopkins University. The country appears poised to pass the 130,000 mark by week's end.

As states rushed to reopen — a political move cheered by both Trump and Graham — the Sun Belt has experienced a massive surge in infections. On Wednesday, the U.S. daily case count topped the 50,000 mark for the first time.

"I will guarantee you that, because when you have an outbreak in one part of the country — even though in other parts of the country they're doing well — they are vulnerable," said Fauci.

"I made that point very clearly last week at a press conference. We can't just focus on those areas that are having the surge. It puts the entire country at risk," he said.