The right wraps itself in the flag, but this year the left are the Fourth of July patriots

Racist jingoism isn't real patriotism — and on this Independence Day, that's clearer than ever 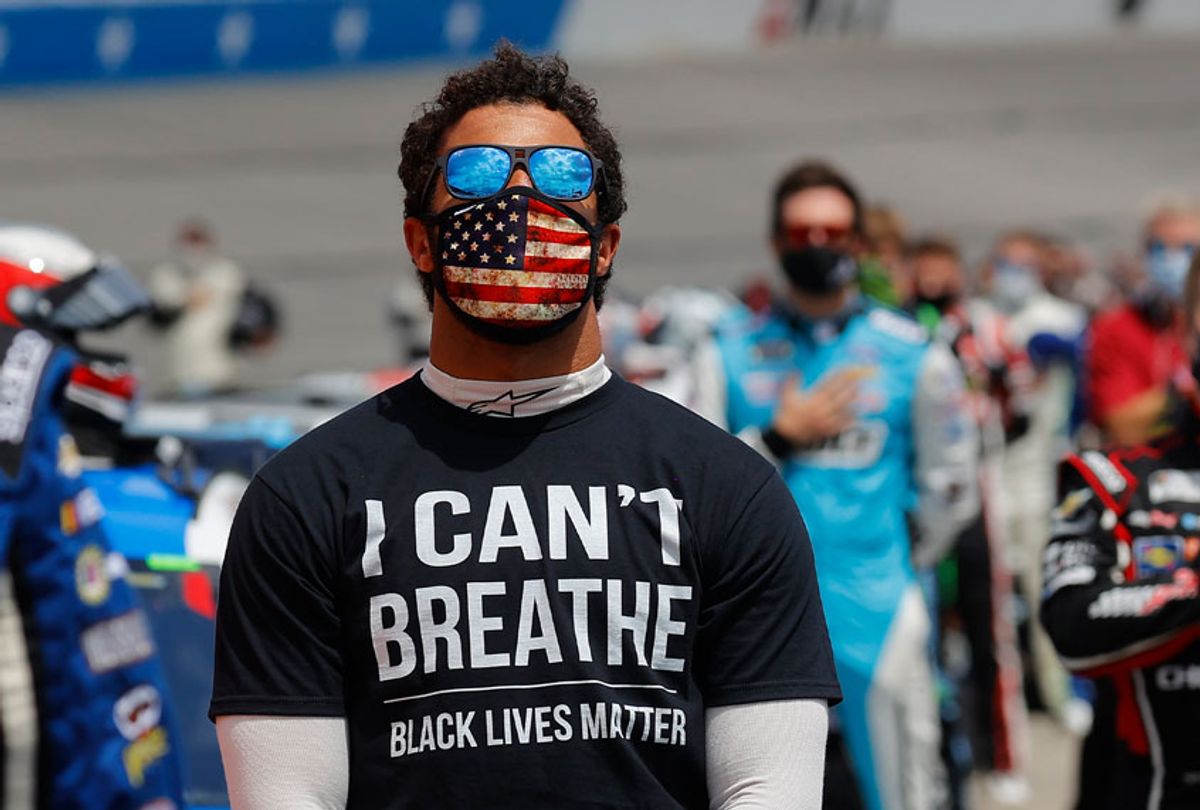 Bubba Wallace, driver of the #43 McDonald's Chevrolet, wears a "I Can't Breathe - Black Lives Matter" T-shirt under his fire suit in solidarity with protesters around the world taking to the streets after the death of George Floyd while in police custody. (Chris Graythen/Getty Images)
--

Of the many images that flowed out of Ferguson, Missouri, during the 2014 Black Lives Matter protests that erupted in response to the police shooting Michael Brown, by far the most iconic is Robert Cohen's photo of Edward Crawford throwing a tear gas canister. The police had fired the canister at the protesters: In a series of photos that won him a Pulitzer Prize, Cohen captured Crawford rushing forward, scooping up the flaming canister up, and throwing it back at police.

The image was arresting for many reasons: Crawford's stirring courage, the brightness of the flames, the fierce pitcher's posture that Crawford struck as he protected protesters from the tear gas. But one undeniable aspect of the photograph's power is that Crawford is clad in an American flag shirt.

As the podcast "Criminal" recently documented, the image was printed on T-shirts and turned into murals, and it's not hard to see why. Crawford's actions spoke to a certain strain of American patriotism, the kind that rejects the history of white supremacy and demands that this country live up to its stated ideals of equality, freedom and justice.

Crawford passed away in 2017, in what authorities believe was a suicide but some family members and activists deem suspicious. His spirit lives on in the growing Black Lives Matter protest movement. As much as the morally empty talking heads at Fox News may rant and rave about how the protests are a threat to America, in truth, this movement is being driven by true patriots who are putting their safety on the line in order to save this country from its worst impulses.

Meanwhile, Donald Trump and his media sycophants have decided to make a cause out of defending Confederate iconography, lashing out at protesters who tear down statutes honoring Confederate military leaders and freaking out at demands that military bases currently named after treasonous rebels be renamed — possibly after actual American heroes.

It's not a novel argument, of course, to point out that American history has always been rife with the cognitive dissonance between our stated ideals of equality and freedom and our actual lived realities, far too often defined more by bigotry and drastic inequality. We were founded by men like Thomas Jefferson who wrote highfalutin words about all men being equal and then return to plantations staffed with enslaved people.

Most of the time, Americans just live, however uneasily, with that dissonance, much in the way we have statues of actual heroes like Standing Bear and Helen Keller standing uneasily in the National Statuary Hall next to bonafide historical villains like Confederate Gen. Robert E. Lee.

Sometimes, however, the dissonance between our ideals and our reality becomes too great to bear and Americans are presented with a stark choice between white supremacy and our image of ourselves as freedom-loving people. Unfortunately, every time such a test arises, far too many Americans value racist impulses over loyalty to America and what it supposedly stands for.

That was true in the Civil War, when white Southerners decided they liked slavery better than they liked being Americans. That was true during the civil rights struggle, when so many white Americans decided they were more invested in segregation than the literal words of the Declaration of Independence that all men were created equal.

We are living through another such time when Americans are being forced to choose between our stated ideals and the implicit codes of white supremacy. Sadly, many white Americans are yet again being disloyal to the country they claim to love in standing with Trump, a man who has no love or loyalty to this country, no matter how many times he play-acts the patriot with his flag-hugging or pretending to sing along to the national anthem.

Trump looked the other way when Russia was paying bounties to kill American soldiers. He pardons war criminals and leaves those who tried to serve with honor to die or watch their lives fall apart. He tear-gassed peaceful protesters exercising their First Amendment rights because he thought it would look cool for a photo shoot. Trump "joked" (he doesn't actually joke) with Russian president Vladimir Putin that he would like to "get rid of" journalists, something Putin has accomplished with murder. Trump not only did nothing substantive when a pandemic started to sweep across the nation, infecting millions and killing more than 130,000 (so far), he actively fought anyone who was trying to take measures to protect Americans, repeatedly trying to block or limit expanded testing, lockdowns or the simple wearing of masks.

Taken together, it's clear that Trump not only doesn't care one bit about this country, its people or its ideals, he's really a man who hates America and the people who live in it. The only real reason anyone would support him is because they love racism more than they love America.

Early on in Barack Obama's presidency, I took a vacation to Paris with a friend. Standing on a street corner, a man asked me, in French, for directions. I apologized and told him I didn't speak French.

I said yes, and the teen girl standing on the sidewalk next to me raised her hands in the air and shouted, "Yes we can!"

That girl's enthusiasm just made me chuckle at the time, and there was certainly an element of deliberate goofiness to her exclamation.

But now that pierces me through the heart. That enthusiasm speaks to me now about why we're seeing Black Lives Matter turn into a global phenomenon, where even countries that have no real relationship to the United States' history of colonialism, racism and slavery are still bearing witness with enormous solidarity marches. People around the world are rooting for the protesters, and for progressives generally, not just because they hate Trump, but because they believe in us.

They believe Americans are capable, in this time when our choices have become so stark, of choosing the right path in this conflict between the values we espouse and the white supremacist views held by our president. It's incredibly sweet. I don't know that we deserve their support, but I hope we can live up to their expectations.

So don't mistake the showy right-wing flag-waving and loud anthem-singing for patriotism. The true patriotism resides with people who hope and believe that this country is still capable of living up to the values enshrined in the Declaration of Independence. If that wasn't obvious before, what we're living through now has made that truth self-evident.