Multiple employees contracted COVID-19, and some were asked to deep-clean the store themselves in exchange for food 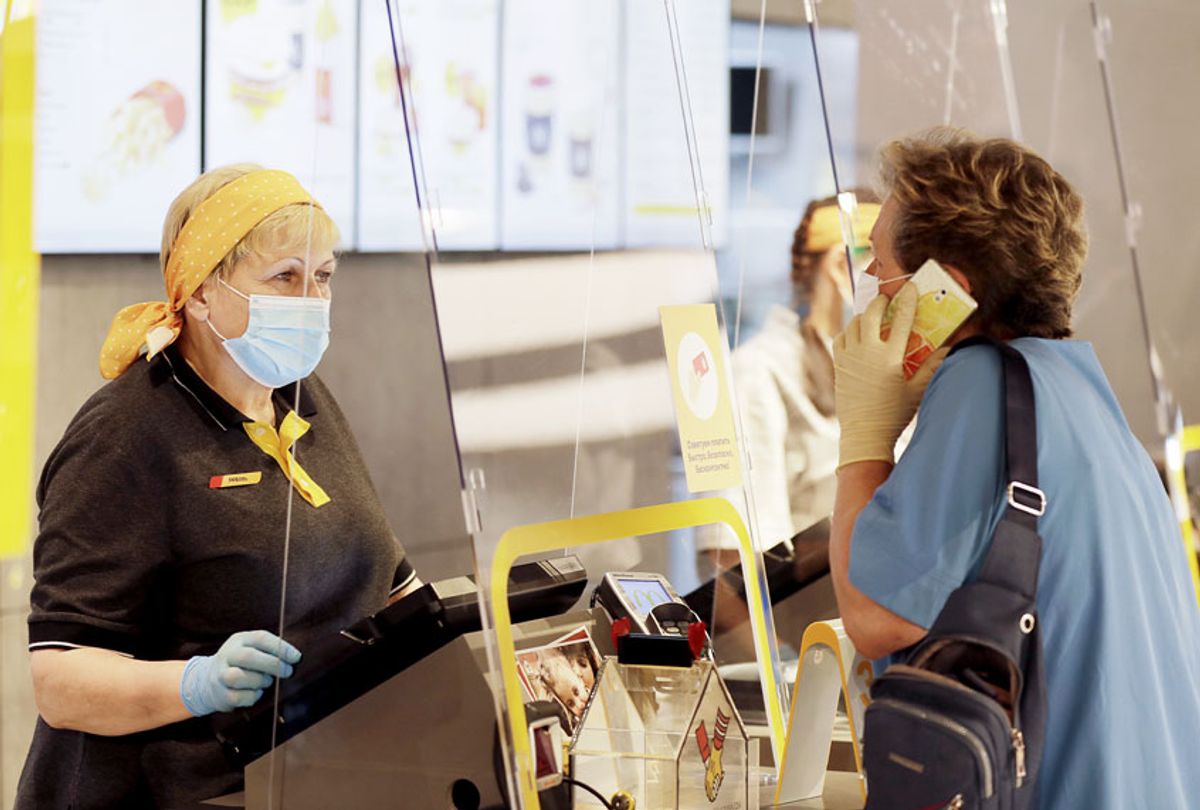 Rosibelle Alvarado works as a dishwasher at a McDonald's in Berkeley, California, where she's been employed for about one year. But for the last four weeks, she's been on strike with 11 of her co-workers protesting unsafe work conditions that she believes resulted in her getting COVID-19.

Alvarado is one of ten workers at the Shattuck Avenue location who have tested positive for coronavirus as of July 8; she found out she had COVID-19 on June 4. Although the strike officially ended today, a decision in part made because of the economic circumstances of some workers, Alvarado is unable to return to work because she's still suffering from COVID-19 related complications.

"Yesterday I went to the emergency room, due to a pain in my stomach and they told me that I have an infection in my stomach due to the COVID-19,"  Alvarado told Salon in Spanish via a translator, adding that she took a second test and is awaiting the results. "There were positive cases at the store, and they weren't doing anything about it, and that is why we organized ourselves and went on strike."

Alvarado and her colleagues say the outbreak is the result of a lack of proper personal protective equipment provided to workers; fear of punishment for missing work after being in contact with an infected colleague; a lack of deep cleans once management knew the coronavirus was spreading around the workplace and in one case, workers being forced to clean without proper personal protective equipment (PPE). These are among the reasons why 12 workers at this McDonalds location went on strike on June 11, a strike that lasted almost a month and only just ended today.

During Alvarado's first quarantine in June, she said she was paid for 80 hours total for two weeks of missing work. However, this time around, she was told by management she wouldn't be paid, though it is well-known that symptoms of COVID-19 can last longer than 14 days.

Larry Kamer, a spokesman for Pavilions Management, which owns and operates the restaurant, told Salon in an email that the "McDonald's restaurant on Shattuck Avenue in Berkeley is safe."

Kamer said the operation has followed "the guidance of the CDC and public health experts and have fully cooperated with the Department of Environmental Health and the Public Health Nurse in the City of Berkeley to help ensure the safety of our employees."

However, in a statement to Salon, Matthai Chakko, public information officer for the city of Berkeley, said that businesses in the city are required to alert the city when they learn that an employee has tested positive for COVID-19.

"In this case, that did not happen," Chakko said in an email. "When we learned about the employee who tested positive, City staff repeatedly reached out to the manager and owner, but it took them over a week to respond."

Kamer said the Berkeley McDonald's has "welcomed several OSHA visits," and disputed the city's characterization of events. "Outside of the workplace we are offering paid sick leave and quarantine pay per the Families First Coronavirus Response Act," he added.

But the Families First Coronavirus Response Act doesn't cover a situation like Alvarado's. Moreover, Kamer said that the business is "sending groceries to employees who have contracted the virus."

Alvarado said the company has been reticent about the grocery deliveries. She notes that she only received groceries once, and it happened after she called a manager because she didn't know if she was going to get paid during quarantine. During the call, the manager asked if she had received groceries.

"I said 'no,' so she said, 'okay I'll get on that and I'll send some to your house,' and that's when a young man dropped off some bags," Alvarado said.

Workers who were on strike were also demanding a deep cleaning of the store, which employees like Edith Aburto, a kitchen manager who was on strike, told Salon they have been asked to do themselves without proper PPE.

"I demand that they do a deep cleaning on the store," Aburto told Salon in Spanish via a translator. Aburto added that "people are afraid to lose their jobs" if they miss work or get sick because of comments or threats from management about losing hours.

Aburto has worked at the McDonald's at Shattuck Avenue location for five years. She told Salon that she started to become alarmed about the coronavirus spreading around her workplace on Sunday, May 24, 2020, when she received a text from a store manager saying that the store needed to be urgently cleaned that night. Specifically, she was asked to deep clean the computer cables, and the punching clock workers use to clock in their time, which she said she found to be a strange request.

"It was weird how they asked us to clean the computer stuff and the cables," Aburto said. "We kept asking ourselves, '[what] is the reason why we have to clean all of that?' They didn't tell us."

It wasn't until she returned to work on the Tuesday after the cleaning that she learned some of her colleagues had become sick with COVID-19.

"They never made a meeting to inform us that there were positive cases or to tell us what was going on," Aburto said.

Once fewer people started to show up to work, word got out about COVID-19 cases among staff.

"We started noticing that there were people's names crossed out on the schedule, and then that's when people started talking about it, that there were positive cases at the store," Aburto said. "They never went to go or sanitize the store or anything like that."

Aburto said she wasn't paid for the one deep cleaning she did on the night of May 24th, and neither were her colleagues.

"We were not paid for that, but we were offered some free meals . . . . but there were certain things that were not available for us for that free meal," Aburto said.

In an email to Salon, Kamer denied the charge: "Crew members may also clean and are paid for their time doing so, just like any other work time."

On June 12, a group of workers, including Aburto and Alvarado, filed a complaint against the Berkeley McDonald's with the California Occupational Health and Safety Administration and the Alameda County Public Health Department detailing unsafe work conditions. In the complaint, viewed by Salon, workers like Alvarado speculate that the spread in their store happened because one colleague also worked at the Telegraph Avenue McDonald's in Oakland—the same one that made the news after workers spoke out about managers telling them to use dog diapers and coffee filters as makeshift face masks.

On May 26, the Telegraph Avenue location, in Oakland, closed its doors after 33 workers went on strike.

While the strike is over for now, Allynn Umel, the organizing director of fast food worker advocacy group Fight for 15, told Salon that fast food workers across the country, including the ones at the Berkeley location, will be participating in another strike — "Strike for Black Lives" — on July 20 as part of an ongoing reckoning on systemic racism. Umel added that the Berkeley strike speaks to a bigger problem within the McDonald's franchise: owners prioritizing profits over the livelihood of their employees.

"Since the beginning of the pandemic McDonald's has chosen, once again, to unapologetically put profits above all else, above the health and safety of their workers, their customers and the community's health," Umel said. "It's about time that McDonald's does better."

There is a bit of cautious optimism as workers return to work this week, which comes after strikers had a phone call with Jesse Arreguín, the mayor of Berkeley, on Tuesday, and the director of the public health department.

"[They] assured the workers that they would continue to monitor the situation, and that the city promised there would be continued monitoring," Umel told Salon. "The other reason that they are going back to work is, you know, at this moment workers are having to choose between their livelihoods and their safety."

However, there are concerns that coronavirus is still spreading at the store. The two newest cases were confirmed just last week. Chakko from the city of Berkeley told Salon that after city staff "completed the investigation and contact tracing" it was determined that "there wasn't heightened risk for further exposure."

Daniela Rodriguez has been working at McDonald's for eight years. At the Berkeley location, she works as a crew manager. In an interview, she told Salon that she is hopeful after the meeting with Berkeley city officials.

"I feel more confident and everything is going to start changing little by little and it's going to be safer for us to go back to work," Rodriguez said in Spanish via a translator, adding that there is financial pressure to end the strike, too. "Most of us depend on this job so we need to get back."

Correction: In a previous version of this story, we stated: "On May 26, the Telegraph Avenue location, which is also owned by Pavilions Management, closed its doors after 33 workers went on strike." Shattuck and Telegraph are operated by two different franchisees. We regret this error. On July 10, 2020, Salon received an update from Fight for 15 on the number of employees at the Shattuck location who have COVID: in total 10 employees, 6 family members, including a 15 month old baby, and 2 roommates of an employee have COVID-19. A previous version stated 11 employees had COVID-19. One family member was miscounted as an employee.