In the gentrified Bay Area, those who suffer under the thumb of tech are seeing their fortunes dwindle even more 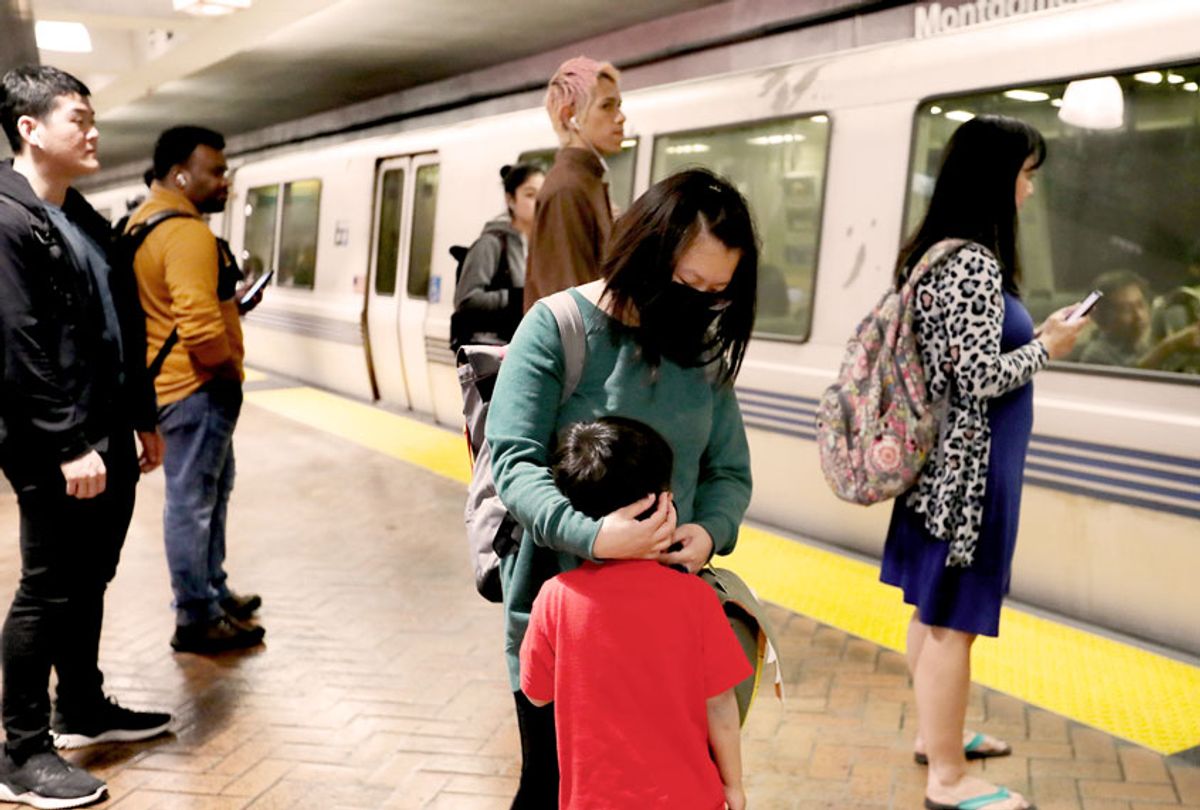 Some commuters opt to wear respiratory masks during the afternoon commute at Montgomery BART station in San Francisco, Calif., on Wednesday, March 4, 2020. On Wednesday, one person became the first victim in California to die from the coronavirus disease. Also, the first two cases in San Francisco were reported the following day. (Ray Chavez/MediaNews Group/The Mercury News via Getty Images)
--

Silicon Valley's white collar workforce is often mocked for how out-of-touch they are compared to the rest of the region. Still, the classist obliviousness of the tech gentry has been out in full force in these pandemic days. To wit: Bay Area Rapid Transit (BART), the regional rapid transit system for the San Francisco Bay Area, has been providing frequent Twitter updates about their service status. In the replies to one of those updates, a Twitter user sarcastically replied, "great timing. Most of us have been WFH [working from home]. [Wave emoji] Hope you meet some riders." Their tweet was deleted, but BART preserved a screenshot.

The regional transit agency responded: "There are many who don't have the option to [work from home]. They have a voice and we will be there to listen and answer their questions."

The tone-deaf tweet epitomized an ongoing class divide in the Bay Area, one that has created a rift between the privileged white collar employees whose companies can easily provide for working from home, and those who must be physically attendant at their jobs. Last week, multiple tech companies, including Google, Salesforce, Twitter and Lyft, mandated that their employees work from home during the pandemic. But as BART's Twitter team notes, not everyone in the Bay Area has that option, especially those who work service jobs that have now been affected by the cancellations of large gatherings.

As Salon has previously reported, the gulf between white collar and blue collar work is made more pronounced by the different ways that workers are treated during some sort of crisis. During the wildfires, those who had labor jobs, like farmers or construction workers, had to inhale smoky air while tech workers stayed inside and worked from home. With the novel coronavirus, people who don't rely on a computer to work — often those people are low-wage and paid hourly — are both at a higher risk of getting the virus because they can't self-isolate without giving up a paycheck, and also more susceptible to its economic fallout.

"Unlike tech gig-workers like programmers and other creative freelancers, gig workers in ride-hailing, food delivery/courier, housekeeping and other low-paid occupations cannot perform their work remotely," Maria Figueroa, Director of Labor and Policy Research at The Worker Institute at Cornell's ILR School, told Salon in an emailed statement. "They are frontline service providers and as such their work disappears as soon as demand for their services goes away. Also, because they are frontline service providers they are more vulnerable to getting infected with a virus; as the majority of these workers are classified as independent contractors, they will not have paid sick leave or health care coverage."

One cohort suffering are those who work at events at the Chase Center, like ushers, janitors and food concession workers. On March 11, the NBA announced that the season would be suspended until further notice; the Warriors, who play at the Chase Center, had seven games left at the stadium. Since large gatherings are also cancelled, many concerts have been at the Chase Center, which were also a source of income for many of these workers.

"Because I have high seniority if there is work or work continues, I will be called back, but at this point we are all on official layoff status. " Preston told me. "The loss of income I'm going to experience just from the NBA games and the concerts, that's about 30 to 35 percent of my income — that is going to have a big impact on my life as it is right now."

Preston says he has a small pension to fall back on, but that he will likely have to start making cuts to life given the income loss.

"That means starting today I got to cut back anything I do that isn't concerned with the essentials," he said. "I may have to have my cable cut off — that would be considered a luxury that I have — I may have to cut out going out to eat. . . . as far as my pets go cutting back on the extra sweet things I would give to them."

Preston is a member of UNITE HERE Local 2, which is the San Francisco and San Mateo affiliate of UNITE HERE, but the union is still negotiating a contract with the Chase Center's food service contractor, Compass Group. Preston said he has been directed to file for unemployment. Earlier this week, California Governor Newsom waived the one-week waiting period for those unemployed or disabled as a result of the coronavirus pandemic. After Salon spoke with Preston, the Chase Center announced that the "[Golden State] Warriors ownership, players and coaches have pledged to donate $1 million to a disaster relief fund established by the Warriors Community Foundation." The fund will help employees, like Preston, who work games at Chase Center.

"The men and women who work our games at Chase Center are critical in providing an incredible game-night experience for our fans, including of course, the popcorn vendors," player Stephen Curry said in a statement. "As players, we wanted to do something, along with our ownership and coaches, to help ease the pain during this time."

However, details around what this money will cover and how it will be dispersed are unclear. It is also unknown to the workers who will receive it. If, like the public statement says, it will go to 1,000 workers, that will be $1,000 per worker. While that's certainly helpful, it is merely a fraction of the income loss that these workers will endure.

"This is an important first step and acknowledgement that the Warriors have a responsibility to their workers," Anand Singh, President of UNITE HERE Local 2 told Salon in an emailed statement. "Now more than ever, we need Dub Nation to come together, and UNITE HERE Local 2 will be reaching out to the Warriors to address concerns about workers' access to health care and the long-term impact of lost income. Months without work will be catastrophic for Chase Center's food service workers — including concessions servers, dishwashers, cooks, suite attendants, bartenders, and more — and we hope the Warriors be there for workers in a way that meets the moment."

Maggie Gibson, who is on medical leave from work but also works the concession stands at Chase Center, said his colleagues were concerned. Salon spoke with Gibson before the Chaster Center announcement, too.

"To all of a sudden lose work, we have very low income people," Gibson said. "I can tell you stories about people who work 50 to 60 hours a week and still need government assistance; They are rushing from one job to another and they shouldn't have to be on food stamps or section 8 or anything else, but they are resilient."

While the Chase Center workers have a happy ending, there will be many who don't.

"Low-wage gig/contingent workers are more vulnerable than most other workers to economic downturns or to crises like the present COVID19 emergency, which is leading to a potentially severe economic recession," Figueroa, Director of Labor and Policy Research at The Worker Institute at Cornell's ILR School told Salon. "Contingent and temporary workers in general are the first ones to be let go in economic downturns, because they work on a job by job basis."