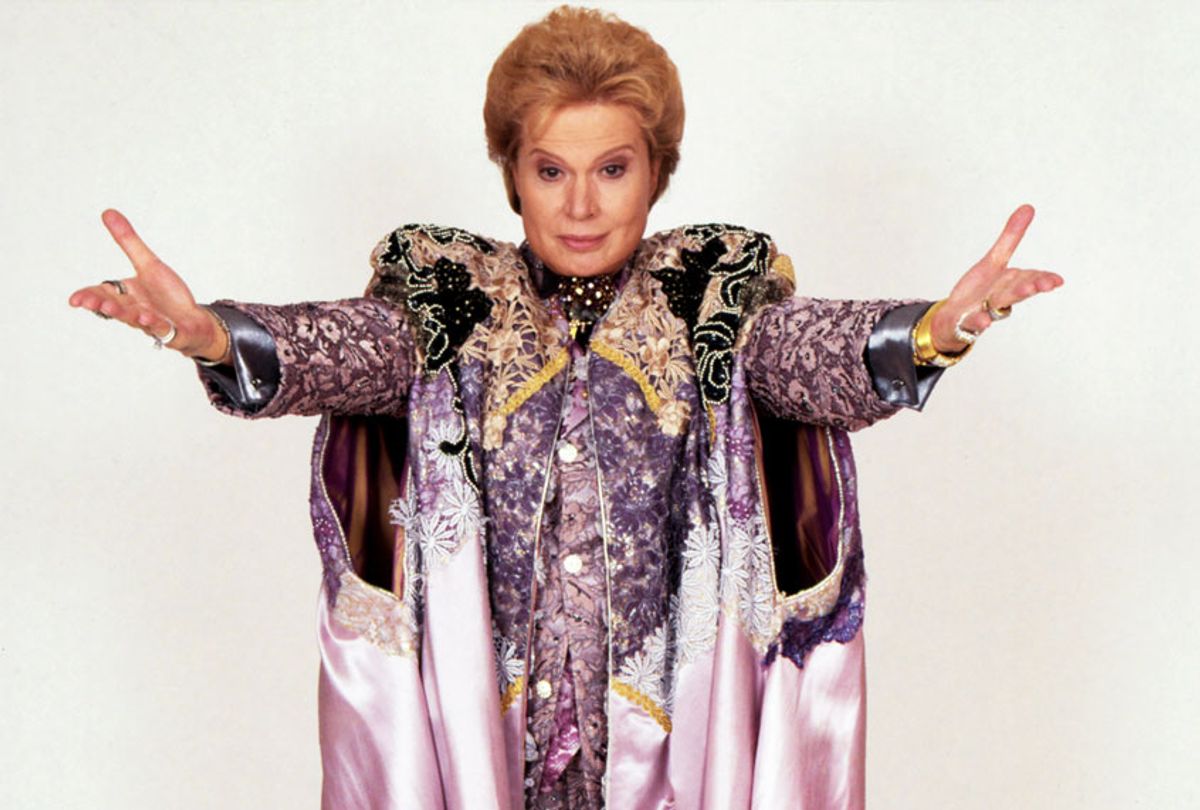 Over the course of the intimate documentary "Mucho Mucho Amor: The Legend Of Walter Mercado" – one of the many new Netflix offerings for July – directors Cristina Costantini and Kareem Tabsch will often ask interviewees if they believe in astrology. Some people say yes, some express doubt, but the majority pause for a moment and then respond: "I believe in Walter."

If you didn't grow up watching Mercado (or have an abuela who would shush you while she was waiting for him to speak about her sign), you may not understand how an astrologer could inspire such devotion. Here's a primer: Mercado, who was born in Puerto Rico, developed a personal style that can only be described as exuberantly opulent, as well as a 120 million-member Spanish-language audience — including modern-day celebrities like Lin Manuel-Miranda — for his television and radio programs that ran from the 1970s to 2006.

But more than that, as the title "Mucho Mucho Amor" (much, much love) may suggest, Mercado's character both on and off stage — which were honestly indistinguishable at many points — was so well-loved because he was so unapologetically himself; a man who used "stupid things," like flamboyant attire and mesmerizing dance-inspired movements "to give a beautiful message of love and peace," subverting a culture steeped in strict Catholicism and an insidious machismo all along the way.

The documentary traces how Mercado began his career as a television astrologer by chance. He was waiting in the wings of a talk show, dressed in a white costume with a cape and stage makeup, to promote an upcoming play. There was a gap in programming, so one of the producers, who knew Mercardo and his penchant for "fortune-telling," asked him to step on stage in costume and fill the segment. It was an immediate hit. Mercado was asked to return the next day, and the day after that.

The cape became his signature look and, over time, it became increasingly detailed — bejeweled, gemmed, sequined, and eventually designed by Versace and Isaac Mizrahi. He settled on a hairstyle that was soft, with feathered waves that framed his face  (there's a meme that pops up occasionally that says "You know you're mom is getting older when she gets the Walter Mercado haircut") and invested in plastic surgery that gave him an "augmented face that defies gender and maybe even age."

As actor Eugenio Derbez says, when he first saw Mercado, he couldn't decide whether he was looking at a man, a woman, or a sorcerer.

And like a mythical character, Mercado had disciples, of sorts. He couldn't walk in the streets without people flocking to him, trying to touch the edge of his cape. As Howard Stern put it on his show, Mercado was "bigger than Jesus Christ," though Mercado demurred that he was closer to Buddha.

But then, in what serves as a kind of climax in "Mucho Mucho Amor," Mercado seemingly disappears from public life. It's a turn that is reminiscent of the 2017 podcast "Missing Richard Simmons" — two glittery celebrities who preach self-love suddenly lock themselves away.  Unlike "Missing Richard Simmons, however, the directors of the documentary have the full cooperation of Mercado (and his assistant Willie Acosta) who lays bare exactly what led him to retreating to a decade or so of solitude.

"Mucho Mucho Amor" works for many reasons — the insightful interviews, the tight editing, revealing archival footage, and some stunning tarot-inspired animations — but also in its recognition that not all that glitters is gold. There are some darker moments in the documentary, like when Mercado cashes in on the early '90s 1-900-number psychic craze. It's an obvious hustle and a break from his purported sincerity.

The documentary also directly tackles Mercado's gender presentation and sexuality, and how it often made him the butt of jokes. Interviewers and late-night hosts would satirize and outright mock his flamboyant dress and traditionally feminine characteristics. For what it's worth, Mercado declines to speak about his orientation; "I have sex with life," he mischeviously muses to the camera. Acosta says people always assume they are a couple, but denies it, saying their relationship is simply familial and that he would describe him as "an androgyne."

But by simply being himself, Mercado inspired a whole generation of queer youth to do the same. Karlo Karlo, a makeup artist and LGBTQ activist say, "Growing up as a queer boy and watching Walter Mercado gave me hope."

Mercado died in 2019 and, in watching this documentary, it's obvious that death was a topic that made him uncomfortable. He dabbled in all the major world religions, looking for an answer to what lies beyond — but he's adamant in his belief that there is a "beyond" – that our bodies are just vessels that will fade, and our essence or souls will remain. The people around Mercado are equally adamant in their belief that his messages of peace and love will endure.

Mercado has enjoyed wave after wave of celebrity and adoration — in the '70s and '80s when he was first on air, in the '90s by those who remember their parents watching him, and today, as he's embraced by the Internet age as a kind of gender fluid, camp symbol of self-love and authenticity. With the release of "Mucho Mucho Amor," it's likely that Mercado's teachings will find a new generation of admirers.