Statues versus protesters: Trump and the GOP favor the dead over the living

Donald Trump's "base" isn't even living Americans. It's a morbid mythology of the past, and meaningless monuments 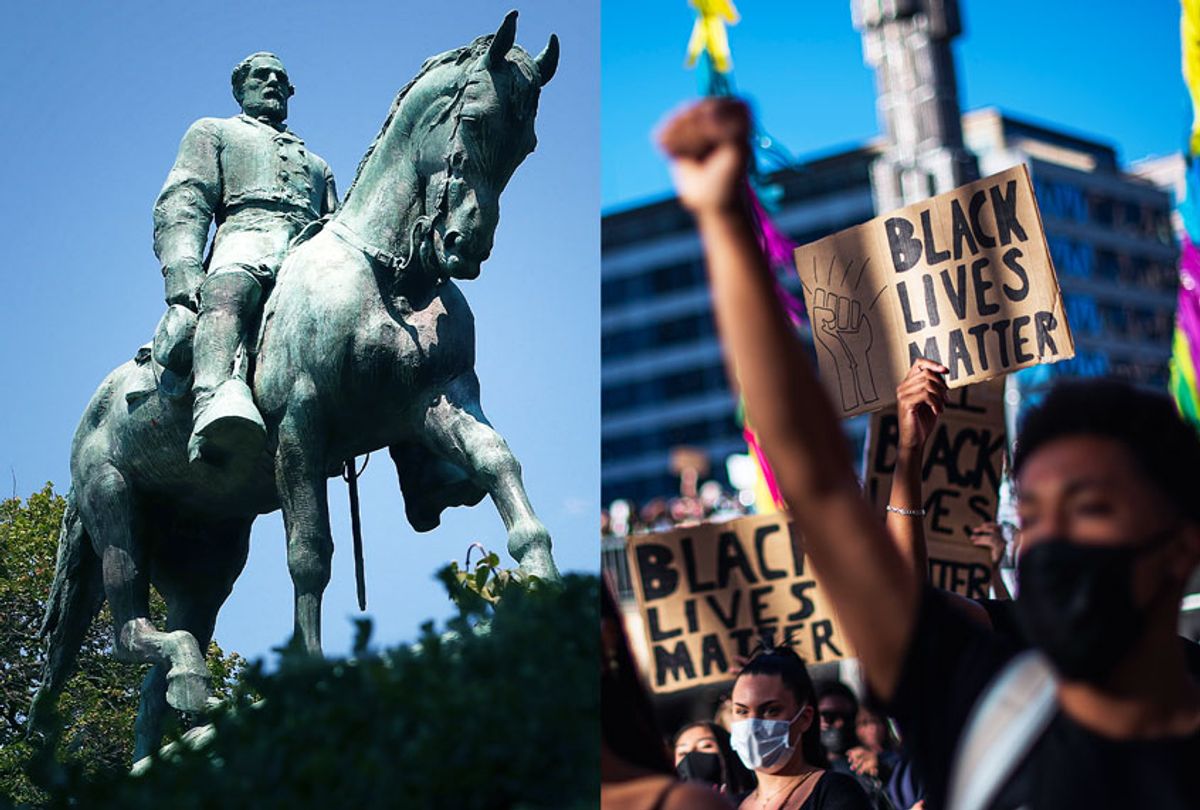 The statue of Confederate Gen. Robert E. Lee stands in the center of the renamed Emancipation Park in Charlottesville, Virginia | Protesters raise their fists during a Black Lives Matter demonstration (Getty Images/Salon)
--

There are few morbid topics subject to greater speculation than the religious loyalty of President Donald Trump's "base." Why an alarmingly large amount of Americans refuse even to entertain any criticism of Trump deserves scrutiny from political scientists, psychologists and perhaps horror novelists working in the school of Edgar Allan Poe.

What is abundantly clear is that no matter who votes for Trump, he and the Republican Party on the national level have no interest in governing on the behalf of living human beings — with the exception of ensuring that a tiny minority of billionaires and multimillionaires enlarge their investment portfolios. Trump evinces no concern for Americans dying of the coronavirus, racist violence or any other malady or injustice. He demonstrates no regard for health care professionals courageously trying to save their patients from dying, and appears cruelly indifferent to the struggles of millions of workers whose livelihoods have been destroyed by COVID-19. Needless to say, Trump also shows contempt for Black Lives Matter, immigrants and anyone who opposes his re-election, which at this moment (and throughout his presidency) is more than half of the American public.

He and his enablers are passionately dedicated to the protection of statues — inanimate stone objects with no pulse, family or central nervous system. The consistency and force of Trump's advocacy on the behalf of lifeless, life-sized figures, and the willingness of his Republican officials and popular right-wing pundits to parrot the agenda, displays a capacity for creative problem-solving that no crisis affecting sentient beings can inspire in them — not climate change, not the 27 million Americans without health insurance, and not high rates of child poverty.

Whether or not this is a cynical campaign strategy to distract Americans from real problems with emotional symbolism, this sensitivity for monuments, as opposed to concern over cruelty to people, neatly divides American politics into the representation of two constituencies: Statues versus human beings.

The Republican Party has amassed around its leader not just to protect this non-living constituency with the threat of fines or even imprisonment for those who deface a statue, but also with promises to enlarge that constituency. Trump has promised the creation of a "garden of heroes" that will allow living organisms to commingle with stone representations of the dead. The list of heroes who will receive tribute in the garden includes the famous homophobes Antonin Scalia and Billy Graham, alongside Jackie Robinson and Susan B. Anthony. Following Trump's announcement, there were no doubt many observers surprised by the garden's omission of Roy Cohn.

Perhaps, if local governments act quickly to build monuments to former residents who have died in the coronavirus pandemic, Trump will, at least, speak about it. In his bizarre July 4 speech, delivered in strikingly subdued tones, he made only one passing reference to the virus and its victims. Dr. Anthony Fauci said in June that his meetings with the president "have dramatically decreased."

In his steadfast refusal to represent a living electorate, Trump has not only neglected the pandemic as a crisis that should be managed to save lives, he has actively worked to exacerbate its toll. He has threatened to deport students on foreign visas if universities do not fully reopen in the fall, and has issued a similar ultimatum to elementary and secondary schools suggesting he may withhold federal aid from schools that stick with online or "blended" learning.

Not content with 134,000 coronavirus deaths and counting, the Trump administration has moved to destroy the Affordable Care Act, pursuing a case before the Supreme Court that could invalidate the entirety of Barack Obama's signature health program. Meanwhile, the same pathological presidency extends its campaign against human life with the revocation of regulations against air pollution. Gina McCarthy, president of the National Resources Defense Council, explains that, in addition to the harmful long term effects, an increase in atmospheric toxins will "make covid-19 more deadly."

A technology as simple as face masks is essential for everyone's safety, particularly that of health care workers, but the "greatest country in the history of the world," as the right wing likes to insipidly boast, cannot ensure that every nurse and doctor has sufficient supply of personal protection gear. National Nurses United conducted a survey of 23,000 registered nurses, and found that a staggering 85 percent have had no choice but to break from medical advice, and reuse masks designed for single use.

Vice President Mike Pence, the chairman of the coronavirus task force and lead apostle for the gospel of Trump, actually suggested in a public briefing that health care workers should "preserve and reuse PPE supplies."

Meanwhile, the revelation that tens of millions of unemployed Americans — many of them still waiting to collect unemployment benefits — cannot make their rent, and that the previous coronavirus relief package contained more funds and tax breaks for large corporations than assistance for small businesses, has at last prompted the Republican Party to entertain the idea of another $1,200 stimulus check. One is in awe of their magnanimity.

The "garden of heroes" announcement resembles the last-place team holding a victory parade in its home city. Increasingly pathetic, the United States can merely trumpet its past achievements, while the rest of the civilized world goes back to school and work, having — for now at least — put the pandemic behind them. Japan, New Zealand and most countries in the European Union have shown what is possible when governments seek to serve the interests of human beings.

They have also better practiced the wisdom of Thomas Jefferson, the man whose monument has become an obsession for Donald Trump. Jefferson once declared in a letter to James Madison what he believed was "self-evident": "The earth belongs to the living."

Thousands of Americans are dying needlessly, while millions of others face misery and privation. The Trump administration refuses even to speak with clarity and empathy about the staggering scale of the crisis. But somewhere a bird is defecating on the bronze head of Robert E. Lee, and the ruling political party in the world's wealthiest country is readying a hose.