We are far from Stoneybrook now: On the quiet revolution of "The Baby-Sitters Club" 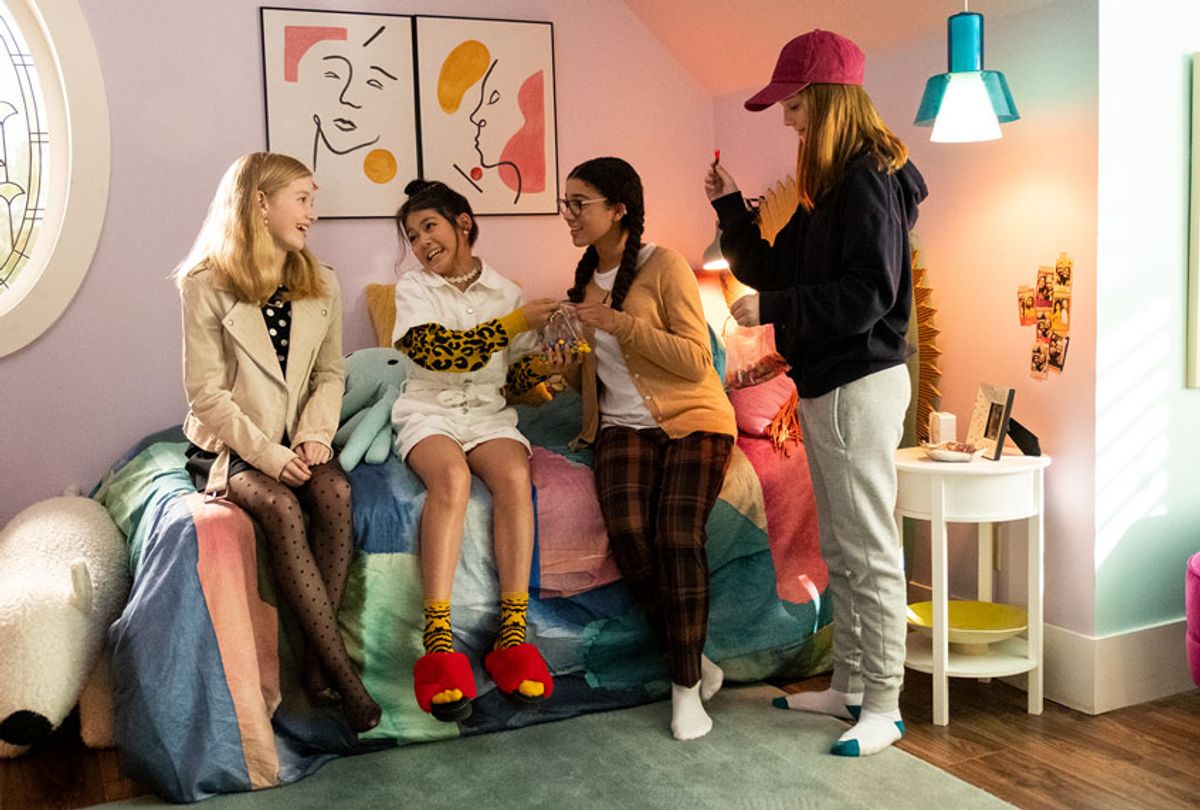 The author of "The Baby-Sitters Club" book series, Ann M. Martin, was prolific.  She wrote dozens of books, many during the late '80s and early '90s when I fit snugly into her readership demographic.  For a while, she was publishing a new book every month, though my appetite for them still outpaced her creative output. I began to write all of my school essays in a derivative, bubbly style, irritating my mother who had been trying to get me into the classics.

When Netflix dropped a ten-episode series based on the books over the July 4 weekend, I was eager to plop down on the couch and press play. I was prepared to be gently clasped in the familiar, sentimental "The Baby-Sitters Club" world. I came for that, and the show did not disappoint. The references to "kid kits" and the sight of the light-up phone awakened my sense memory, like tasting that initial ice-shard lick of a pudding pop.

At the same time, I was unprepared for what an unfamiliar world it would be. Peering into the fictional town of Stoneybrook, Connecticut, is eerie sometimes, and not just because the kids are able to attend school, to have sleepovers, and to fling their arms around each other in exuberance without worrying about aerosol droplets. I began to sink back and let the show wash over me like an analgesic. It is perfectly suited to do this, and not just because its wholesome, low-stakes dramas (Will Claudia be allowed to go to the dance? Will Kristy and Mary Ann make up?) are a welcome reprieve from the life-and-death dramas that have become compulsory in our lives.

Stoneybrook is a tantalizing alternative universe where difference — interracial families, same-sex parents, trans people — simply exists. For example, there is a small moment in the second episode, when Stacey runs into a couple whose daughter she had babysat. The couple happens to be a same-sex couple, but that fact is normalized and incidental, the encounter serving as a plot point for other reasons. The show immerses us in a world where this couple just is, and where another couple's trans child is simply accepted, temporarily allowing us to forget that our president has recently curtailed protections for LGBT couples, and has disallowed trans people from serving in the military. The new "Baby-Sitters Club" series allows us the dream of equality at a time when our own inequalities loom large, and even the privileged among us cannot look away.

I realize now that the books were always subversive. Each one was a quiet revolution bound in pastel, building-block letters plopped on top. It wasn't just the archetypes we responded to — the "Kristy," the "Mary Anne." For many girls I was friends with then, and women I've befriended since, these books were the first time they were able to read stories with protagonists who looked like themselves: a Black girl, an Asian-American girl, perhaps even a queer girl (if you believe, as some do, that Kristy's relationship with Bart always rang false). Each book was narrated by a different club member, every character getting her moment in the sun. What my mother failed to understand at the time was that, for a whole generation of girls who are now women, these books were classics in their own right.

Still, the fictional world of Stoneybrook was not immune from real-world dilemmas. While the books weren't overt civic lessons, there was a quiet feminism to these bubblegum stories about first crushes and misbehaving triplets. The mini-entrepreneur protagonists leaned in. In Stoneybrook, like everywhere else in America, there was also racism. Who could forget when Jessie was called an "Oreo" at Camp Mohawk? Jessie's stories provided the first of many counterpoints to my own white, middle-class schooling, which largely presented both sexism and racism as historical, linear and resolved.

As an adult now, I see these inequalities in much starker relief. Partly that's because I had the extreme privilege to be able to ignore them as a child. Partly that's because I'm a sociologist now. And partly that's because turning away is not an option in our current moment. In nearly every way, the COVID-19 pandemic has magnified the fault-lines of our existing disparities. It has disproportionately impacted African-American and Latinx populations, as well as immigrants and those with lower levels of education. Those with relative privilege are more likely to be able to work from home, to scale back, and to flee the cities. Asian Americans are being harassed and assaulted, scapegoated as bat-eaters and disease-purveyors, with even the President making cracks about "kung flu." The pandemic has also dealt a major blow to gender equality, widening our existing inequalities in caregiving — with women, much more than men, dropping out of the workforce or scaling back to tend to children and other vulnerable family members. In the past, those of us seemingly unaffected by these inequalities could brush them away into the wings of public life, using words like "post-racial" and soothing fables about meritocracy. These ugly things are out of the wings now, cavorting grotesquely on our central stage.

On the show, people generally try to do the right thing, and when they don't — when a babysitter neglects her charge, or a doctor brashly mis-genders a child — there are consequences. In the real world, meanwhile, many seem unwilling to take even the mildest of precautions or extend the most basic of decencies, like placing a rectangle of fabric over their faces in order to protect vulnerable others.

The show is soothing, rocking us in the ripple of its quiet revolution, but it also pains me to see how much that world diverges from our own. Changing the ugly things about ourselves will necessitate much more than Aunt Esme's shaman stick — it will require the toppling not just of statues but of institutions, systems, the dismantling of deeply-entrenched circuits of power. We are far from Stoneybrook now. Still, the show gives us the dream of something. At a time when our most base impulses and our large-scale social inequalities hulk in gargantuan caricature, "The Baby-Sitters Club" quietly ushers us toward a world where things could be different.

Danielle J. Lindemann is an Associate Professor of Sociology and a core faculty member in Women, Gender and Sexuality Studies at Lehigh University.