If collective action can force businesses to bear the costs, employers will force politicians to take action

By Kevin A. Young - Michael Schwartz 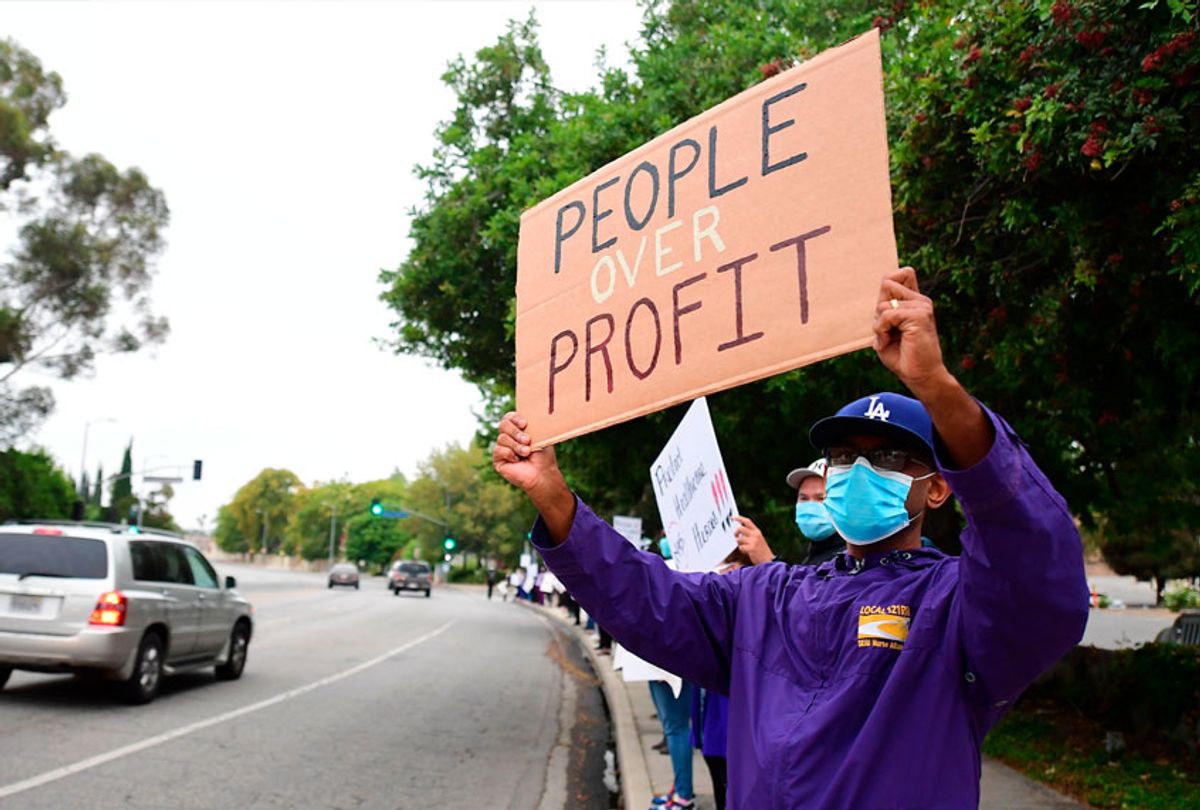 The government's response to the pandemic has further enriched the wealthy, while everyday people, especially Black and Brown workers, face sickness, death, and destitution. Government handouts to the rich are unsurprising, since they repeat the century-old pattern of "rescue packages", but another pattern is more perplexing: why have business leaders not stepped up to demand a robust public health response, which would ultimately be in their own self-interest? The titans of industry have mostly stood by in the face of Trump's criminal negligence, which has devastated much of the 99% but also endangers the wealthy.

Judging by past history, there's little reason to believe that even the most progressive corporations will "do the right thing." But collective action by ordinary people can compel them to. Mass disruption of business by workers, consumers, and renters can shift the costs of the crisis onto business owners. If we force them to bear the costs, they'll demand the needed changes in government policy, using sway that the average person simply lacks.

Take for instance the meat industry, which exemplifies both the worst of "coronavirus capitalism" and the enormous vulnerability of corporations right now.

The industry was already notorious for its dangerous conditions and racist exploitation of nonwhite and undocumented workers. Now the major meatpackers have ramped up production and denied aid to their infected workers and the local communities that have become virus hotspots. By late June, 30,000 meat workers were known to have contracted the virus in 260 plants, leading to 102 deaths. And because of government-sanctioned secrecy by meatpacking executives, these figures were surely a vast underestimate.

The Trump administration's Occupational Safety and Health Administration has refused to intervene in the industry. The June 22 issue of Bloomberg Businessweek noted that "OSHA hasn't issued a single job site requirement for how meatpackers should protect workers." Guidelines from the Centers for Disease Control and Prevention, meanwhile, are "purely voluntary." The result is that "U.S. meat plants are deadly as ever, with no incentive to change."

The examples of European packing plants and certain plants in the United States, which have had much lower infection rates, demonstrates that the current trend is avoidable. The meat companies could drastically reduce infections if they invested the capital to slow the speed of processing, spread out workers, insulate work stations, test workers daily, perform contact tracing, and guarantee paid sick leave.

The major firms have been unwilling to take these steps. Instead, they are reaping record profits by running the plants at full capacity, replacing sick workers from the ample supply of unemployed substitutes, and inflicting poverty, illness, and death on the surrounding communities.

Yet the meat industry is also highly vulnerable to disruption by workers, consumers, and local communities. Because of the nature of the production process, which relies on immediate refrigeration of disassembled animal parts to prevent spoilage, a work stoppage or absenteeism in just one part of a plant can throw a wrench in the gears. This is how meat workers during and after the Great Depression made meatpacking into a highly-paid union job with relatively safe working conditions and good healthcare plans.

Organized work stoppages and strikes could both protect workers and revitalize the unions in the industry, putting them in position to address the abysmal conditions – low wages and long hours, high rates of injury and sickness, and systematic racism – that predate Covid-19. Meatpacking workers have a long-forgotten history of militant interracial unionism, led especially by Black workers. Their efforts greatly reduced injury rates, among other gains.

An updated version of this approach would empower the most exploited workers in the industry, who are 80 percent nonwhite, 52 percent foreign-born, and 42 percent women. While there is often intense racial animosity among the workforce – stoked by the companies – it can be overcome.

People outside the plants can play a vital supporting role. They can support workers' demands for protective gear and better conditions. They can press local governments for health regulations that put pressure on the industry. And they can mount organized boycotts that threaten profits, since virtually all packed meat is now sold as "name brands" like Tyson and Hormel. Even Bloomberg Businessweek concedes that consumers "could force change with mass boycotts."

Successful pressure on a single major producer can change the whole industry. Victory in a single plant can inspire similar actions elsewhere, while also teaching employers that quick concessions can prevent the devastating losses that a work stoppage can cost in meat spoilage and lost customers. As soon as one major producer is forced to implement changes, it will insist that their competitors be forced to adopt the same changes. This concern for competitiveness is precisely why the first federal regulation of the meat industry, the 1891 Meat Inspection Act, was passed.

We see hints of the same dynamic as Covid cases surge during the country's "reopening." Politico reports that in Florida the tourism industry has itself asked state officials "to crack down on dozens of eateries and bars that have failed to embrace capacity restrictions and social distancing guidelines – a remarkable invitation to pursue its own members." Tourism has been devastated by the pandemic, so the industry is especially vulnerable to pressure by workers and consumers. Targeted boycotts of reckless businesses could help amplify the pressures already being felt across the board.

By forcing these companies to enact safety measures, worker and consumer disruption can help quash the curve for the country as a whole. As part of this process, OSHA might even be transformed into an effective regulator.

A clue from the past for transforming OSHA

Long before the pandemic, OSHA had been neutralized by Congressional underfunding (its budget is 0.5 percent of the amount spent on police), corporate lawsuits, and the designation of pro-business appointees. Even before Trump became president, the agency was so resource-starved that it would've taken 139 years to inspect all U.S. workplaces. Since 2017, Trump has reduced inspections still further. OSHA now has its fewest inspectors since 1975, while the workforce they are tasked with protecting has doubled in size.

Shaming OSHA or electing Joe Biden won't solve the problem. Historically, direct disruption by workers and consumers has often been essential to bringing about government regulation of business. As we argue in our new book, Levers of Power: How the 1% Rules and What the 99% Can Do About It, this disruption can even push employers to welcome regulation as a necessary evil.

Like today's OSHA, the National Labor Relations Board was initially feckless. On paper, the 1935 Wagner Act guaranteed private-sector workers' right to unionize and created the NLRB to oversee union elections. But most employers simply ignored the law and the agency.

By the early 1940s, however, they had changed course and accepted the NLRB's authority. What changed their minds was an upsurge in strikes and work stoppages – almost 9,000 in the years 1935-37 alone. The auto industry was a vital site of conflict. The famous Flint sit-down strike of 1936-37 forced General Motors to recognize the United Auto Workers union.

Over the next several years worker militancy continued to impose direct, sustained costs on employers. Accepting the NLRB thus became a way to restore stability. Later that year, the Wall Street Journal reported that auto executives "unanimously express satisfaction with the National Labor Relations Board decision to hold elections" in workplaces.

Thus a new regulatory agency was created and empowered, overcoming the diehard business opposition to unionization. Business never fully accepted the NLRB, and in the 1940s would begin a long-term assault on the agency's powers. But the episode shows how mass disruption targeting employers can pave the path to regulation.

The worker actions of the 1930s provide a model for current-day movements, including for fighting the pandemic. If collective disruption can force businesses to bear more of the virus's costs, employers will force politicians to finally take the measures needed to defeat it.

Kevin Young teaches history at the University of Massachusetts Amherst. Michael Schwartz is professor emeritus of sociology at Stony Brook University. They are co-authors, with Tarun Banerjee, of Levers of Power: How the 1% Rules and What the 99% Can Do About It (Verso, 2020).

Kevin Young teaches history at the University of Massachusetts Amherst.

MORE FROM Kevin A. Young

Michael Schwartz, professor of sociology and faculty director of the Undergraduate College of Global Studies at Stony Brook University, has written extensively on popular protest and insurgency, and on American business and government dynamics. His books include "Radical Politics and Social Structure", and "Social Policy and the Conservative Agenda."