Trump's commutation of Roger Stone's sentence is blatant corruption: He'll get away with it

Robert Mueller saw this coming, and the criminality is obvious. Will anyone do anything? You know the answer 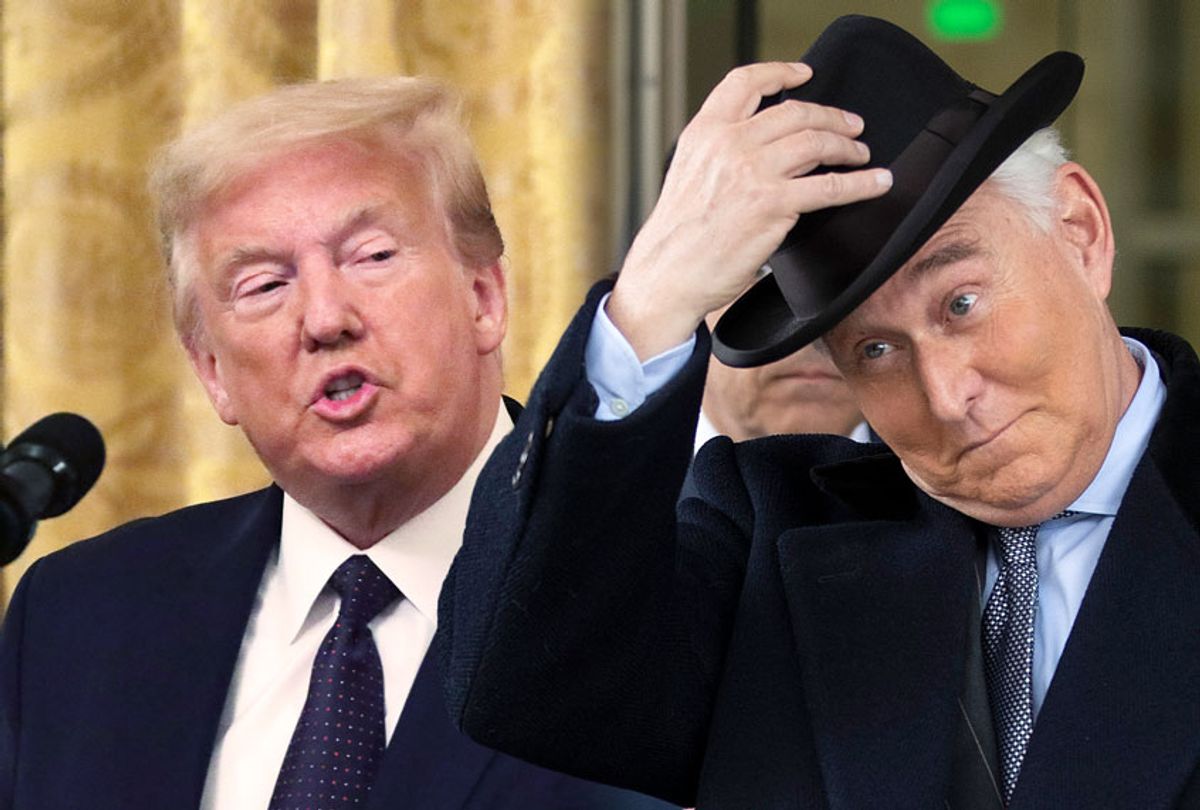 I don't think there was anyone in the country who was truly surprised that President Trump commuted his good pal Roger Stone's sentence. I think we might have expected a full pardon, but since there was reportedly so much resistance within the administration, Trump may have decided that commutation before the election, and then pardon afterward looked like a reasonable compromise.

Certainly, Trump was never going to let Stone go to prison. Stone made sure of that. Last week he told journalist Howard Fineman:

I had 29 or 30 conversations with Trump during the campaign period. He knows I was under enormous pressure to turn on him. It would have eased my situation considerably. But I didn't. They wanted me to play Judas. I refused.

I'm pretty sure Trump got that message loud and clear. After all, his mentor was Roy Cohn, the infamous lawyer and fixer whose clients included Sen. Joseph McCarthy and the mobsters Carmine Galante and "Fat Tony" Salerno, among other unsavory characters. Cohn also mentored Roger Stone.

He told the "Fox & Friends" hosts back in 2018 what he thought of people who cooperate with the authorities:

It's called "flipping" and it almost ought to be illegal. I know all about flipping. For 30, 40 years, I have been watching flippers. Everything is wonderful and then they get 10 years in jail and they flip on whoever the next highest one is or as high as you can go.

Roger Stone made sure in the days just before he was set to go to prison that the president understood exactly what he needed to do. Trump knows Stone very well, and understood what he was capable of. Stone might easily have decided to flip if Trump didn't come through. They've known each other so long that whatever Stone has on Trump doesn't necessarily have anything to do with the Russia investigation. Stone knows where a lot of bodies are buried. He helped bury many of them.

He needn't have worried. His boy Trump came though, although against the wishes of his White House counsel, chief of staff Mark Meadows and even his top henchman, Attorney General Bill Barr. You can imagine how upset Barr must have been after he went to such great lengths to have Stone's sentence reduced that he caused an insurrection at the Department of Justice and permanently destroyed his reputation. He obviously thought he'd helped Trump's buddy out sufficiently, but that wasn't enough.

You'll recall that Barr claimed that the president didn't order him to do it and that it was just a coincidence Trump had tweeted this mere hours before Barr's decision:

When reporters asked Trump over the weekend why he didn't take Barr's advice not to commute Stone's sentence, Trump replied, "Well, he didn't say that. No, the attorney general, about a week or two ago, had made a statement, but that was long before anybody knew what I was going to do."

Actually, that was before Stone made it clear last week that he would not stand for doing even a day of jail time. His reminder that his "situation" would be much improved if he turned on Trump left no room for interpretation.

Stone's no Paul Manafort, Trump's former campaign chairman, who spent several months in jail before being allowed to serve home confinement due to the pandemic. Manafort stood up to the prosecutors and Trump let him sit behind bars. But then Manafort only knew Trump briefly, and can't possibly have the same volume of dirt on him that Stone has. (Furthermore, Manafort had his own reasons for clamming up, namely some angry Russian mobsters to whom he owed a lot of money.)

The Stone commutation announcement was unusual, to say the least. In fact, it sounded a lot like Trump dashed it off in a series of tweets and the White House decided that would serve as an official proclamation:

Aside from the dishonest rehash of the Mueller investigation, which was the usual Trumpian combination of whining and blaming, the president attacked a juror in Stone's trial in his official announcement, which was probably one of the lowest acts he's ever perpetrated — and that's really saying something. The degree to which the self-appointed "law and order president" disrespects the legal system is unprecedented. Even notorious gangsters are more civil.

If you are wondering why Trump may have commuted the sentence instead of just pardoning his old buddy, journalist Marcy Wheeler pointed out that a commutation allows Stone to maintain his Fifth Amendment right against self-incrimination, which means he doesn't have to testify against Trump in any possible further proceedings regarding all those phone calls between them — conversations that Stone specifically mentioned in that interview with Howard Fineman.

Lawfare's Benjamin Wittes and Quinta Jurecic observed that Trump has just committed another act of obstruction of justice. They argue that Trump's written answers to Robert Mueller about his knowledge of the WikiLeaks plot were lies, which also specifically pertain to the felonies Roger Stone was convicted of committing. It's clear from the record that Trump was signaling to Stone throughout to keep his mouth shut.

Newly unredacted pages of the Mueller report back that up. According to Lawfare:

[S]hortly after he submitted those answers [to the special counsel], the unredacted report states, Trump began tweeting publicly in support of Stone — calling him "brave" and congratulating his "guts" for refusing to testify.

Trump's tweets were always suspicious, to say the least. And his answers to Mueller seemed less than entirely credible even when the redacted report was first released. But the newly revealed text makes clear Mueller's suspicions that Trump lied in his written answers — and then pushed Stone not to testify in order to prevent Mueller from discovering that lie.

As Mueller put it dryly: "[T]he President's conduct could also be viewed as reflecting his awareness that Stone could provide evidence that would run counter to the President's denials and would link the President to Stone's efforts to reach out to WikiLeaks." The special counsel also writes that Trump's tweets to Stone — along with his tweets criticizing [Michael] Cohen, who was by then cooperating with investigators — "support the inference that the President intended to communicate a message that witnesses could be rewarded for refusing to provide testimony adverse to the President and disparaged if they chose to cooperate."

This should have been an impeachable offense. But for reasons I will never understand, nobody wanted to bother with all the evidence of obstruction of justice in Mueller's report. I suspect there will be little appetite for pursuing it after Trump is out of office, which is a travesty.

The president of the United States just exercised his constitutional powers to commit a crime in plain sight. And once again he will get away with it.