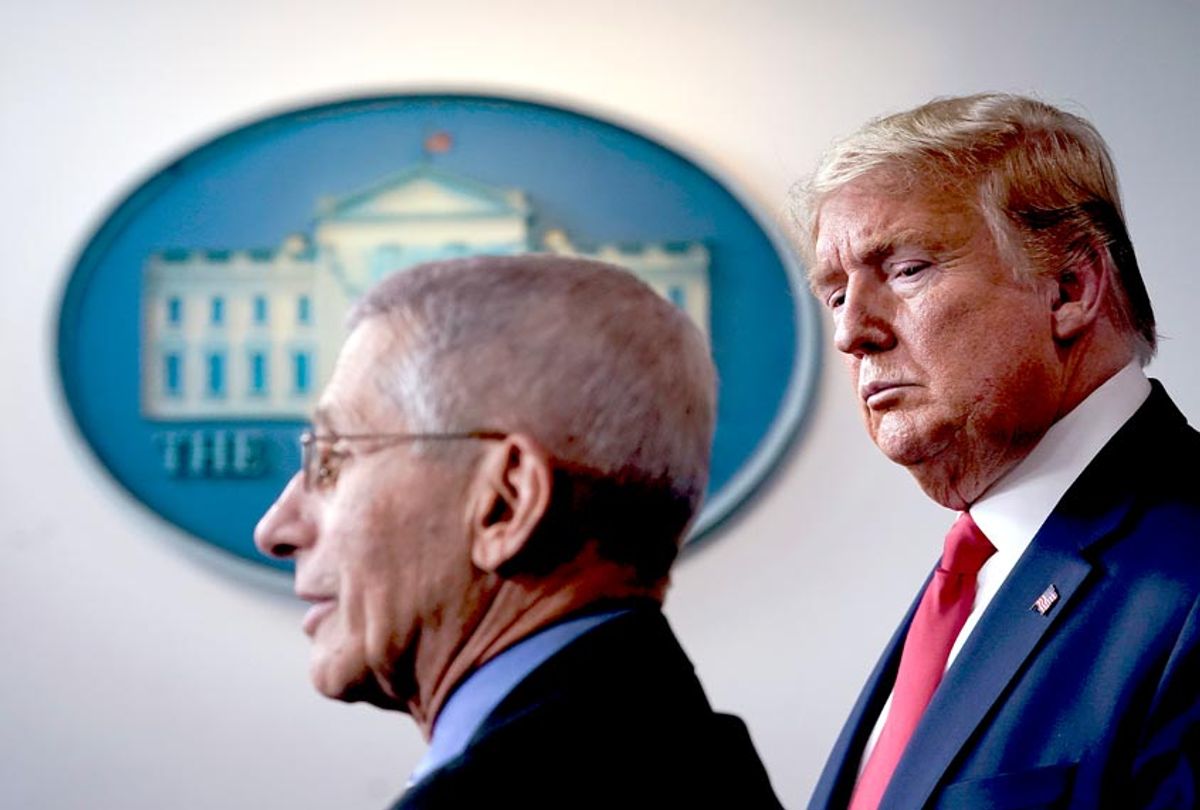 An anonymous White House official released a statement claiming that "several White House officials are concerned about the number of times Dr. Fauci has been wrong on things" and included a "lengthy list" of comments he made early in the outbreak which turned out to be incorrect, The Washington Post first reported.

The document was sent to reporters at seemingly every mainstream news outlet.

"As @washingtonpost first reported, a White House [official] also provided a long list of past Fauci comments that did not age well, in what bears striking resemblance to an oppo dump," NBC News's Josh Lederman added.

The New York Times' Maggie Haberman also noted that it was "laid out in the style of a campaign's opposition research document."

Trump has repeatedly said in recent interviews that he "disagrees" with Fauci on his assessment that the coronavirus is getting worse — not better — in the U.S. His concerns are visible in the data: the country reported a record-high 67,211 new confirmed cases Friday.

Fauci no longer briefs Trump and is "never in the Oval [Office] anymore," a senior official told The Post. The two have not spoken since the first week of June, though the report noted that Trump cannot directly fire Fauci, who has strong bipartisan support after more than 50 years at the National Institutes of Health.

Trump has also been bothered by Fauci's approval rating. A recent New York Times poll found that 67% of voters trust Fauci for information on the coronavirus compared to 26% who trust Trump.

"Lately the White House stopped approving most requests for Dr. Fauci to appear on TV, believing it would help reduce the public contradictions," CNN's Kaitlan Collins reported, adding that they let him do print and podcast interviews in which he disputed claims made by the president.

"As a country, when you compare us to other countries, I don't think you can say we're doing great," he said in an interview on a FiveThirtyEight podcast last week. "I mean, we're just not."

Fauci disputed Trump's claim that "99%" of coronavirus cases were "totally harmless," telling the Financial Times that was "obviously not the case."

He even appeared on a Facebook Live event with Sen. Doug Jones, D-Ala., where he disputed Trump's claim that the country's relatively low death rate showed progress in the coronavirus response, calling it a "false narrative."

"Don't get yourself into false complacency," he warned.

The list sent by the anonymous White House official notes that Fauci argued early in the outbreak that there was no significant asymptomatic transmission and downplayed the risk of community transmission, though this was when other disease experts were saying the same things based on the data.

"Dr. Fauci is not 100 percent right, and he also doesn't necessarily — and he admits that — have the whole national interest in mind," he said. "He looks at it from a very narrow public health point of view."

"Fauci's supporters acknowledge those early mistakes, attributing them to the challenges posed by a new, largely unknown pathogen," The Post reported. "They agree he downplayed the possibility of the virus spreading from person to person in January and early February, even as it quietly seeded itself in communities on the East and West coasts. And, like several other public health officials, he initially said the public shouldn't wear masks, but now strongly recommends it, especially when individuals can't maintain distances of at least six feet from other people."

The attempt to discredit Fauci to advance the president's false statements on the virus alarmed public health experts.

"The White House attacks on Dr. Fauci are unfair and dangerous," Dr. Vivek Murthy said, who served as the surgeon general under former President Barack Obama. "He's been right on #COVID19 far more than the politicians who blame him. During pandemics, science is your guide-even if it's politically inconvenient. Covid is surging. We need to hear more from scientists, not less."

"If they want to fire or undermine Fauci they should do it in broad daylight and explain why," Sen. Brian Schatz, D-Hawaii, who serves on a subcommittee that oversees health spending, argued. "And if the media must cover this they should not give anonymity to powerful officials to help them do their dirty work."