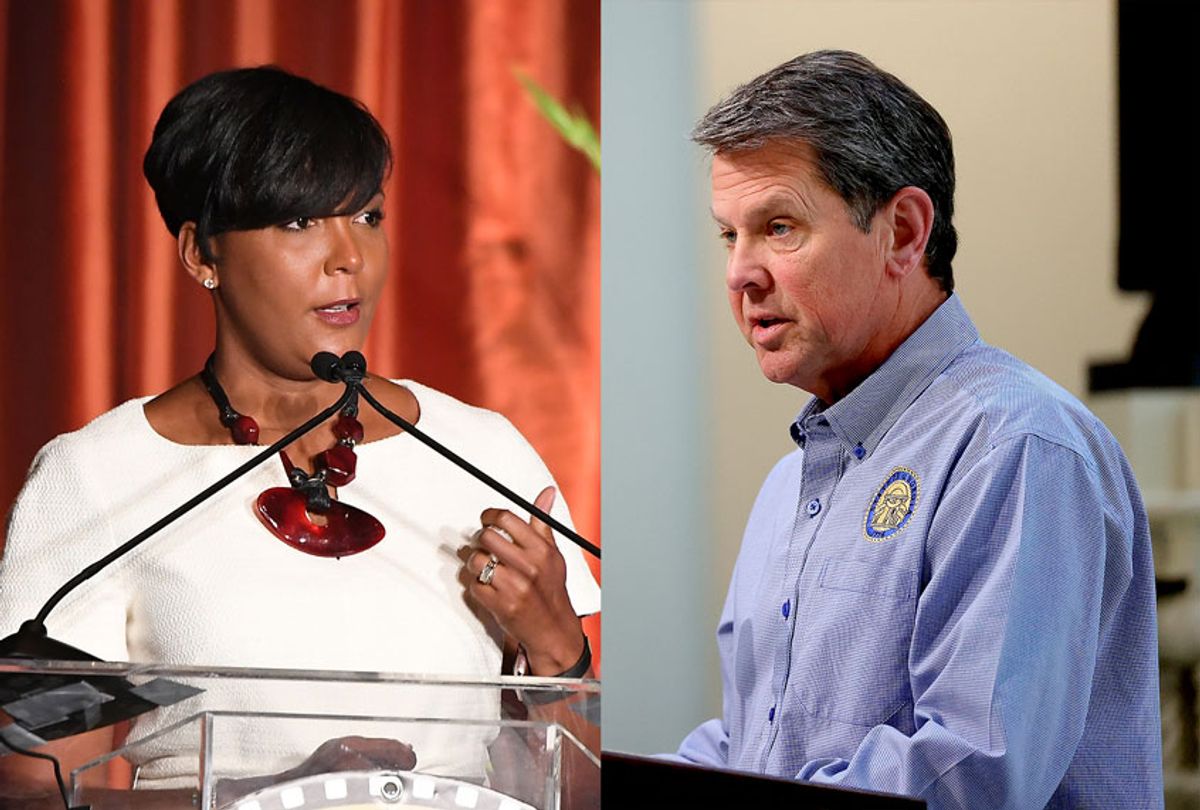 The office of Georgia Republican Gov. Brian Kemp released a statement Monday instructing Atlanta residents to ignore "confusing" new restrictions put in place over the weekend by Mayor Keisha Lance Bottoms amid record-high COVID-19 infections in the city and across the state.

Citing Kemp's "reckless" reopening, Bottoms, who recently tested positive for COVID-19, had directed the city to return to Phase 1, or the most restrictive measures.

"Based upon the surge of COVID-19 cases and other data trends, pursuant to the recommendations of our Reopening Advisory Committee, Atlanta will return to Phase I of our reopening plan," the mayor announced Friday.

"Georgia reopened in a reckless manner, and the people of our city and state are suffering the consequences," she added.

Atlanta's Phase 1 requires individuals to stay at home, except for essential trips, and to wear a face covering in public. It bars large gatherings and only allows restaurants and retail stores to serve customers curbside or to-go. All non-essential city facilities would close.

Bottom's new directive, issued as Georgia set another state record of more than 4,400 new cases, was at odds with parts of an executive order Kemp signed June 11. Among other things, Kemp's order allowed Georgia restaurants to fully open, lifted the ban on conventions and revoked stay-at-home requirements for residents 65 and older, with exceptions for those with certain underlying health conditions.

Kemp first posted his rebuttal Friday on Twitter, but commemorated it Monday in an official statement on the governor's office website, calling Bottoms' order "non-binding and legally unenforceable."

"Mayor Bottoms' action today is merely guidance — both non-binding and legally unenforceable," the governor's statement said. "As clearly stated in the governor's executive order, no local action can be more or less restrictive, and that rule applies statewide."

Kemp, for his part, began to reopen his state in late April before the Trump administration's national guidelines expired.

"Once again, if the mayor actually wants to flatten the curve in Atlanta, she should start enforcing state restrictions, which she has failed to do," Kemp's statement said. "We ask citizens and businesses alike to comply with the terms of the governor's order, which was crafted in conjunction with state public health officials. These common-sense measures will help protect the lives and livelihoods of all Georgians."

But Bottoms shows no signs of backing down, and she counts mayors of Georgia's other largest cities among her ranks.

Kemp himself faces a decision Wednesday on whether to extend the current restrictions first put in place June 11. He has so far encouraged face masks but refused to require one in public.

The Georgia Department of Public Health on Tuesday reported another 3,394 cases, 209 hospitalizations and 28 deaths. The positivity rate ticked up to 13.7%, well above the state's 10% average to date. The pandemic has also put renewed strain on Georgia hospitals, which are running low on critical care beds.

Cases are soaring across the Atlanta metro region, with some areas reporting more than 200% increases over the last two-week period.

Kemp, who claimed to learn of asymptomatic transmission in early April despite government warnings since January, has come under fire for what some see as a lethally performative political approach to safely navigating the pandemic.

He was the first U.S. governor to announce he would lift economic restrictions, saying that he didn't "give a damn about politics." A few weeks later, with the Republican National Convention's chances on the rocks in North Carolina, Kemp offered to host the event and lifted the prohibition on conventions in his next executive order.

In fact, Kemp's early moves seemed so far ahead the curve that the White House task force reportedly enlisted Dr. Deborah Birx in an attempt to convince President Donald Trump to withdraw his initial support.

The president eventually reversed course and aired his disagreement with Kemp in public.

"I told the governor of Georgia, Brian Kemp, that I disagree strongly with his decision to open certain facilities which are in violation of the Phase 1 guidelines for the incredible people of Georgia," Trump said at a White House briefing, adding that he would likely intervene in the event of "something totally egregious."