Gaslighting folks on climate change was easy, because it's slow-moving — but the coronavirus is here and now 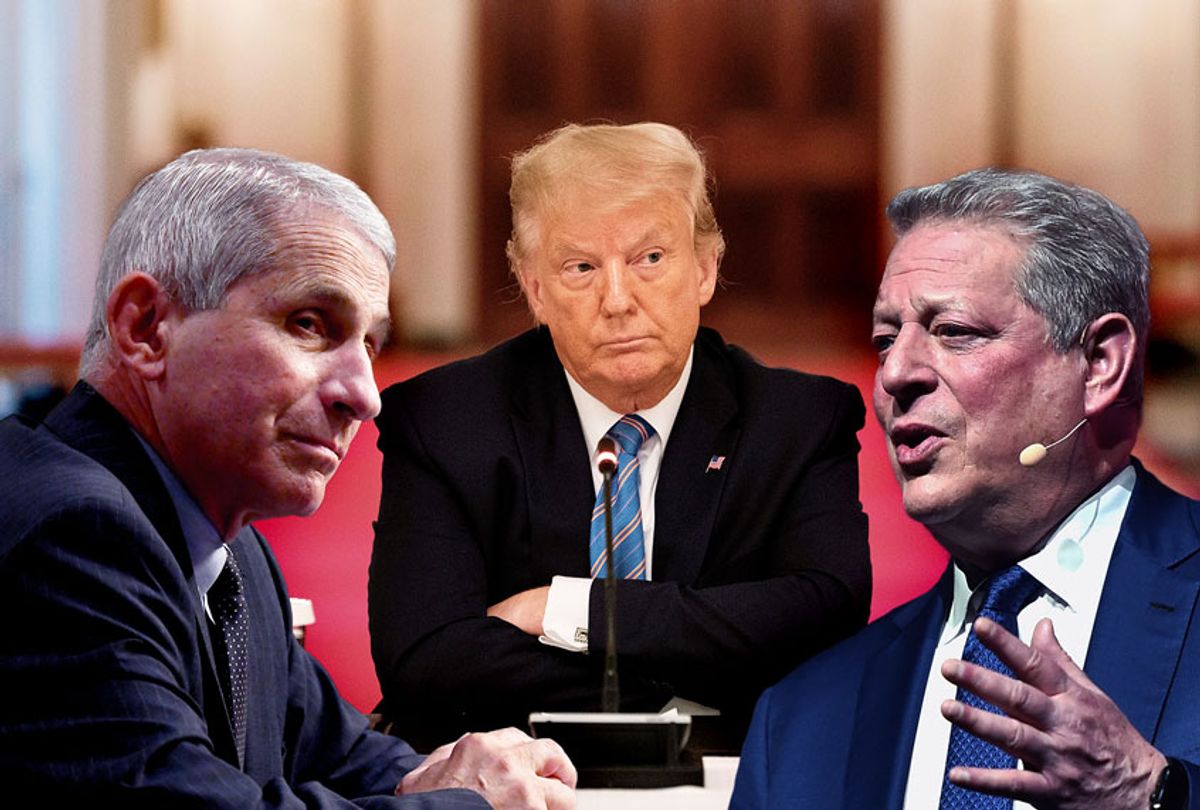 It's no exaggeration to say that Republicans bought themselves years of getting away with ignoring and denying climate science by calling former Vice President Al Gore mean names. Beginning in the '80s, Gore, with his earnestly nerdy persona, had become the face of a growing movement to raise the alarm about the rapidly warming planet and the horrors humanity would face if more wasn't done to reduce emissions of greenhouse gases. To discredit the entire idea of climate change theory, the right focused not on the science, but on discrediting Gore as a messenger.

Needless to say, the efforts to demonize Gore — and, by association, climate-change theory — were a veritable dictionary of logical fallacies. One common tactic was to call Gore fat, as if there wer any relationship between Gore's waistline and the accuracy of climate science. He was also painted as a hyperbolic and opportunistic liar, with conservatives insisting falsely that Gore had claimed he "invented" the internet, with the implication being he was also making up climate change.

This notion that Gore was hysterical got lodged into the public imagination, so much so that as late as 2006, "South Park" offered an episode in which Gore was presented as what my colleague Matthew Rozsa called "an attention-seeking loser who tried to convince the world of the existence of a fictional monster that was 'half man, half bear and half pig.'" The episode was an effort to discredit "An Inconvenient Truth," Gore's 2006 documentary about climate change.

"South Park" creators Trey Parker and Matt Stone finally admitted in 2018 that Gore was right and they were wrong. Too little too late: In the 12 years since, Republican hostility to doing anything about climate change has hardened into a fact of life, so immovable that few Republicans even have to bother justifying themselves by claiming to be climate-change skeptics.

Now Donald Trump is in office — elected on a wave of the same "stick it to the liberals" energy that Gore endured for decades — and there's a new inconvenient truth that bedevils Republicans and their loathing for the very idea of the government intervening on the behalf of the public good: The coronavirus pandemic.

The parameters of the current situation aren't mysterious. This virus is washing across the country, infecting millions and killing, as of Tuesday morning's data, at least 135,000 Americans and probably significantly more. Trump, out of a combination of laziness and a faith in his magical powers of gaslighting, believes that if we simply pretend the virus isn't there, kids will go back to school, people will go back to work, the economy will rebound and he'll win the election. He and his cronies are dusting off the climate denial handbook in an effort to confuse the public about science just long enough to drag Trump across the finish line in November.

Their new Al Gore is Dr. Anthony Fauci, director of the National Institute of Allergy and Infectious Diseases, who has served under every president since the '80s and has become a trusted figure for coronavirus information, amid the sea of denialism emanating from Trump's White House.

Trump quite clearly hopes he can do to Fauci what Republicans — and "South Park" — were able to do to Gore, in other words to paint him as a hysterical, attention-seeking busybody who can't be trusted. Along the way, of course, the president would like to cast doubts on every aspect of scientific or medical knowledge about the coronavirus that is currently killing Americans.

Over the weekend, the White House unveiled an all-hands-on-deck strategy to discredit Fauci, ironically by highlighting past statements where, working off limited information about a brand-new virus, Fauci was overly optimistic about the country's ability to stave off the coronavirus. Of course the "he was wrong then, he could be wrong now" tactic being used by the White House contradicts itself, since the premise that he must be wrong now is based on saying he was wrong then about the stuff he's right about now. He is Schrodinger's Fauci: Somehow both right and wrong, and wrong because of how right he is.

These are the same people who managed to convince huge swaths of the nation that climate change isn't real because Gore is fat. So let's just say it's reasonable to conclude  that their arguments don't have to make sense to be accepted.

This time around, however, there's every reason these efforts to convince the public not to believe in the coronavirus won't work nearly as well as they did when applied to climate change.

And let's be clear about the goal of Trump and his allies: They absolutely, undeniably want to convince people to believe the coronavirus is a hoax. While putting out talking points trying to undermine Fauci's authority, Trump retweeted game-show host Chuck Woolery's claiming that "Everyone is lying" about the coronavirus  to keep "the economy from coming back, which is about the election."

Fox News, which has been amplifying and encouraging Trump in his mission to spread the belief that coronavirus is a hoax, doubled down on Monday night, with prime-time hosts telling audiences there is no need for preventive measures like face masks and social distancing.

These tactics worked so with climate change because that's a slow-moving phenomenon, in relation to the average person's life span. When Gore first started warning the public about climate change, the concept seemed abstract and far off. It was easy enough for conservatives to point to the fact that snowstorms still happen every winter to suggest this proved that Gore's warnings were hysteria. It's just a lot harder to believe in a problem that isn't visible. In recent years, as the extreme weather events we've been warned about — shocking summer heatwaves, raging wildfires, terrible hurricanes, ice-free winters — become more common, we don't here nearly as much blithe climate-change denialism as Gore faced in the first few decades of his activism on this issue.

The coronavirus, on the other hand, is neither abstract nor far away. Pandemic news continues to be all-consuming, and not just on a national scale, but on local news stations and in social media forums, especially as the new virus hotspots are not concentrated in "coastal elite" areas but in states like Texas, Arizona and Florida. Governors in states that have failed to contain the virus, usually under pressure from Trump not to enforce any restrictions on public spaces and businesses, have seen their approval ratings plummet. It took decades before Americans started to experience the effects of climate change directly, but this virus has rampaged through our country for the last four months, and seems to be getting worse, not better.

Rather than convince the public to disbelieve Dr. Fauci, Trump's attacks on the doctor have only served as a reminder of what most Americans already know: Trump is a shameless liar who will say or do anything, no matter who it hurts, if he thinks he can gain a temporary advantage. It's not just Trump's critics who know this. Trump supporters know it as well. Mostly, they voted for him because they liked the way his trollish disregard for the truth aggravated liberals. But they also aren't going to his rallies in big numbers, because they understand, on some level, that he doesn't care about them and is willing to see them die rather than admit he's wrong about the coronavirus.

What that means for the election remains to be seen, but if Trump somehow wins in November, it will be despite his attacks on Dr. Fauci. Climate change was easy to ignore for many years, because it seemed like a future problem for future people. But the coronavirus is sweeping the country as we speak, something anyone among us could get tomorrow. When your house is on fire, no amount of "Al Gore is fat" jokes will convince you to pretend everything is actually OK.