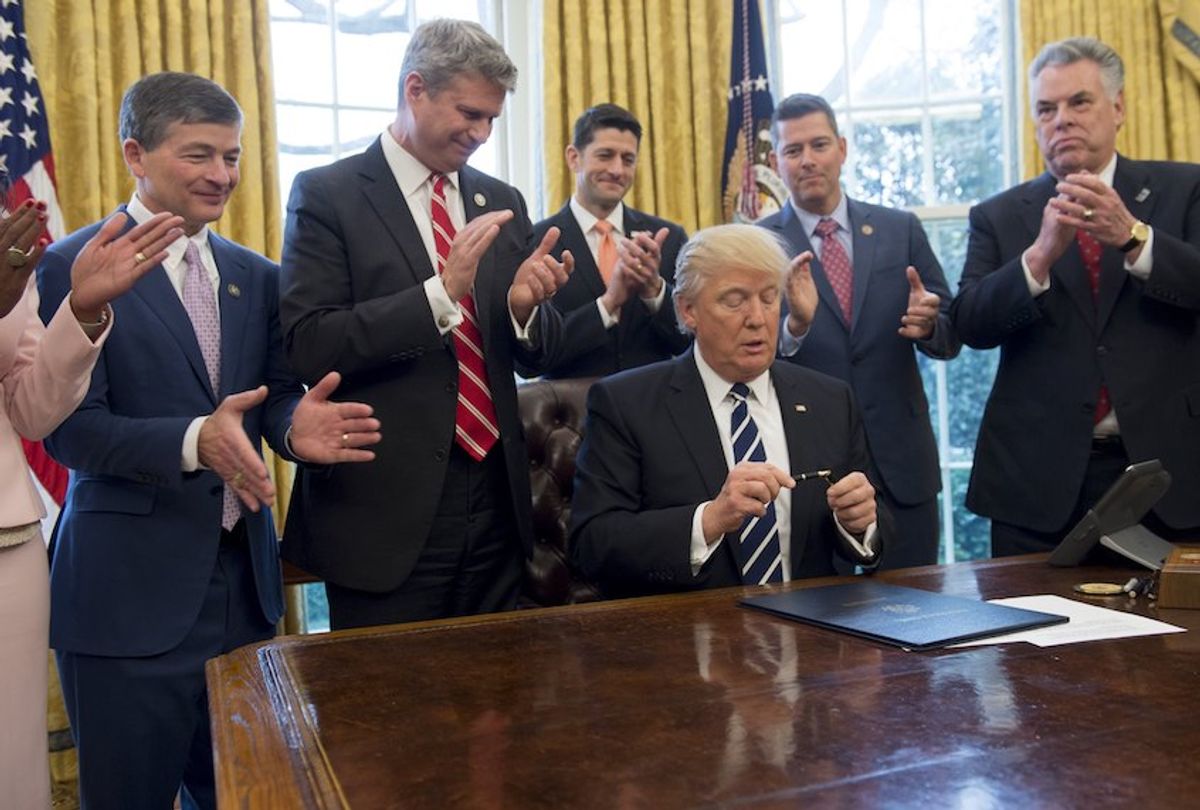 Lawmakers applaud as US President Donald Trump puts the cap on his pen after signing House Joint Resolution 41, which removes some Dodd-Frank regulations on oil and gas companies, during a bill signing ceremony in the Oval Office of the White House in Washington, DC, February 14, 2017. / AFP / SAUL LOEB (Photo credit should read SAUL LOEB/AFP/Getty Images) (Saul Loeb/AFP/Getty Images)
--

President Donald Trump's ongoing efforts to roll back regulations designed to protect the environment, workers, and public health likely played a significant role in the spread of Covid-19 in the United States.

"President Trump's deregulatory agenda has affected all those factors, and, therefore, the disproportionate racial and economic justice impacts of deregulation are now most likely compounding in deadly ways in the wake of the Covid-19 pandemic," the report says.

The report cites the Trump administration's rollback of restrictions on nearly 2,000 forms of hazardous air pollution in 2018, weakening of the Clean Power Plan, and gutting of vehicle fuel efficiency standards in 2020 as examples of environmental deregulatory actions that left the U.S. more vulnerable to Covid-19. The U.S. currently has the most confirmed coronavirus cases and deaths in the world.

"These rollbacks have put all of us—especially low-income communities, Black people, and people of color, and essential workers—at higher risk of contracting and dying from Covid-19," said Gina McCarthy, former Environmental Protection Agency administrator and current president of the Natural Resources Defense Council.

The report also points to the Trump administration's weakening of workplace safety standards at meatpacking plants, which have become major Covid-19 hotspots. According to the Centers for Disease Control and Prevention, more than 16,200 meat and poultry processing workers have contracted Covid-19 at 239 facilities in the U.S.

"In October 2019, the Trump administration's Department of Agriculture finalized a rule to 'modernize' swine slaughter inspections," IPI's report says. "The new program, which pig processing plants may opt into, reduces the number of food safety inspectors in plants and removes caps on pig slaughter line speeds."

By forcing workers to perform their jobs in close proximity to one another, the report notes, the prioritization of speed over safety forces "likely puts meat processing workers at greater risk for Covid-19."

The Trump administration's efforts to undermine the Affordable Care and limit Medicaid eligibility by approving state-level work requirements also may have contributed to the spread of Covid-19, according to the new report.

"Though some of these state requirements have since been invalidated by the courts, other state programs could yet be implemented, and even the temporary loss of coverage in some states could be significant—particularly during a pandemic," the report says.

Dr. Kathleen Rest, executive director of the Union of Concerned Scientists, said in a statement that the Trump administration's "failure to listen to and act on the best available science is irresponsible and dangerous."