He can't hold rallies, so he forced the press corps to sit through one. Then he said Joe Biden will ban windows 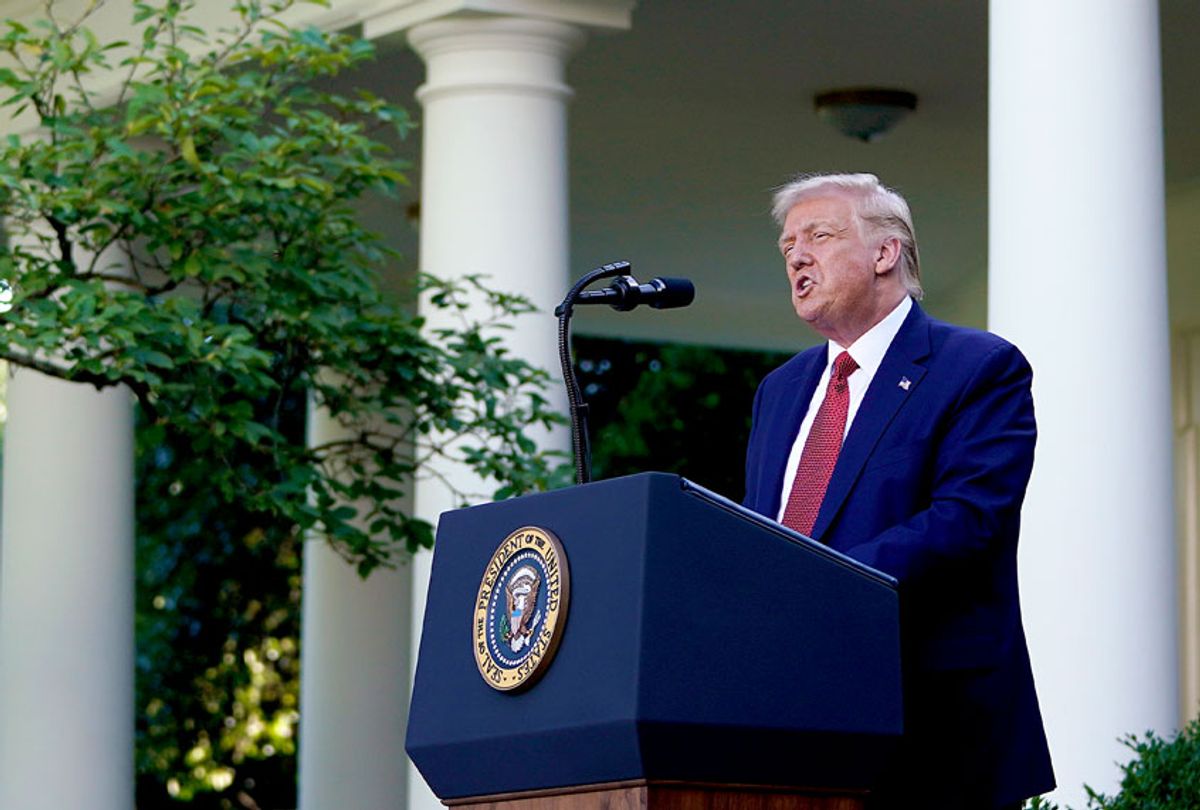 U.S. President Donald Trump speaks to the media in the Rose Garden at the White House on July 14, 2020 in Washington, DC. President Trump spoke on several topics including Democratic presidential candidate Joe Biden, the stock market and relations with China as the coronavirus continues to spread in the U.S., with nearly 3.4 million confirmed cases. (Drew Angerer/Getty Images)
--

President Trump is having a rally problem. This past weekend he was forced to cancel a highly-touted rally in Portsmouth, New Hampshire, supposedly because of "bad weather." They don't normally cancel Trump rallies even when people are waiting outside in below-freezing weather, so this was surprising. In fact, the weather was warm and sunny on the New England coast that day, so it's pretty obvious that campaign officials were afraid they'd see a repeat of the Tulsa debacle.

But Trump simply cannot go very long without his rallies. They are like a drug for him. Remember, he held "victory rallies" even during the presidential transition, when any other president-elect without political experience might have been hunkered down to learn a little something about the job. The long period of no rallies during the first months of the pandemic made him so restless and nervous that he took over the task force briefings and sparred with the press just to get some airtime. He needs rallies like he needs Diet Coke and L'Oréal Light Reddish Blond hair color.

I'm sure he was upset that the media broadcast Joe Biden's speech on climate and energy on Tuesday morning so the White House scheduled a Rose Garden "press conference," which was actually an excuse for him to deliver one of his sprawling campaign speeches. It turns out that as much as Trump may love the look of a rally venue filled with screaming fans, what he really loves is the sound of his own voice.

He started out a little bit low energy, but even without the ecstatic cult members shrieking "Lock her up!" and "Build that wall!" he managed to work himself up to deliver one of his patented incoherent rally performances as if the audience in front of him weren't a bunch of masked-up, socially distanced reporters, who were undoubtedly confused as to why they had been summoned to the Rose Garden to act as props for Trump's stump speech.

This is not normal. Even Fox News' Bret Baier was compelled to point out, after it was over, "To be fair, if President Obama had given a speech like this in the White House, Republicans on Capitol Hill would have been up in arms." Indeed, if Obama had done anything like that, Republican heads would have swiveled on their shoulders and their mouths would have erupted with green bile like Linda Blair in "The Exorcist." After all, they had a full-blown hissy fit when Obama wore a tan suit to the White House briefing room one day.

The "Rose Garden strategy," as it's called when presidents opt not to campaign, is supposed to show the president so hard at work doing the people's business that he can't take the time to engage in silly political events. It is often employed when a president is running for re-election in the middle of a crisis, for obvious reasons. They generally don't want the voters to think they are ignoring their duties when something serious is happening. (The obvious example was Jimmy Carter, faced with the Iran hostage crisis during the1980 campaign against Ronald Reagan. It didn't help him.)

Sure, the Rose Garden strategy is also political, and designed to create or burnish an image, Regardless, it's long been customary for the president to save the fiery campaign speeches for the road. They are supposed to present some dignity and decorum in the Rose Garden. Trump doesn't know the meaning of those words and he is not trying to convince anyone that he's hard at work on anything but TV-watching, tweeting and pouting.

This wasn't the first Rose Garden appearance in which he's turned the place into a political sideshow. Back when the White House first began hosting daily coronavirus task force briefings with the president in attendance, they were often unruly and overtly political. But they were at least real press briefings with serious questions from the media. Tuesday's press conference was a bait and switch. After rambling for nearly an hour, the president took just three questions one of which had obviously been planted with OAN, his favorite propaganda outfit.

What did he actually say? That can be summed up in a few sentences. He ragged on China for a bit, just to justify having the "press conference" in the first place. Then he spent most of his time reading woodenly from a list of prepared attack lines against Joe Biden, which included inane comments like "Joe Biden's entire career has been a gift to the Chinese Communist Party" and accusing Biden of saying that "the idea that China is our competition is really bizarre," to which Trump ad-libbed, "He's really bizarre." That was before he claimed that Biden's energy plan would result in windows being banned. No one can say what that was about.

And yes, Trump spent what felt like hours reciting the usual litany of his supposedly unprecedented achievements, which included this odd comment:

I don't think I want to know.

As for the issue that's at the forefront of every American's mind right now, Trump only offered the usual innumeracy, ignorance and lies:

If we didn't do testing — instead of testing over 40 million people, if we did half the testing, we would have half the cases.  If we did another — you cut that in half, we would have, yet again, half of that.

Evidently nobody can teach him why that is so mind-bogglingly ridiculous and wrong, so he just keeps saying it.

Most galling of all, he took credit for saving millions of lives, dishonestly asserting again that the U.S. has the lowest mortality rate in the world. (It does not.) To him the loss of more than 136,000 Americans, with thousands more seriously ill, and families everywhere grieving, is nothing compared to the great pride we should have in our president for allegedly saving us from something worse.

Remember when Trump used to say we'd get tired of all the winning and we'd beg him to stop because we couldn't take it and he'd insist that we had to keep winning whether we liked it or not? This, apparently, is what he was talking about.