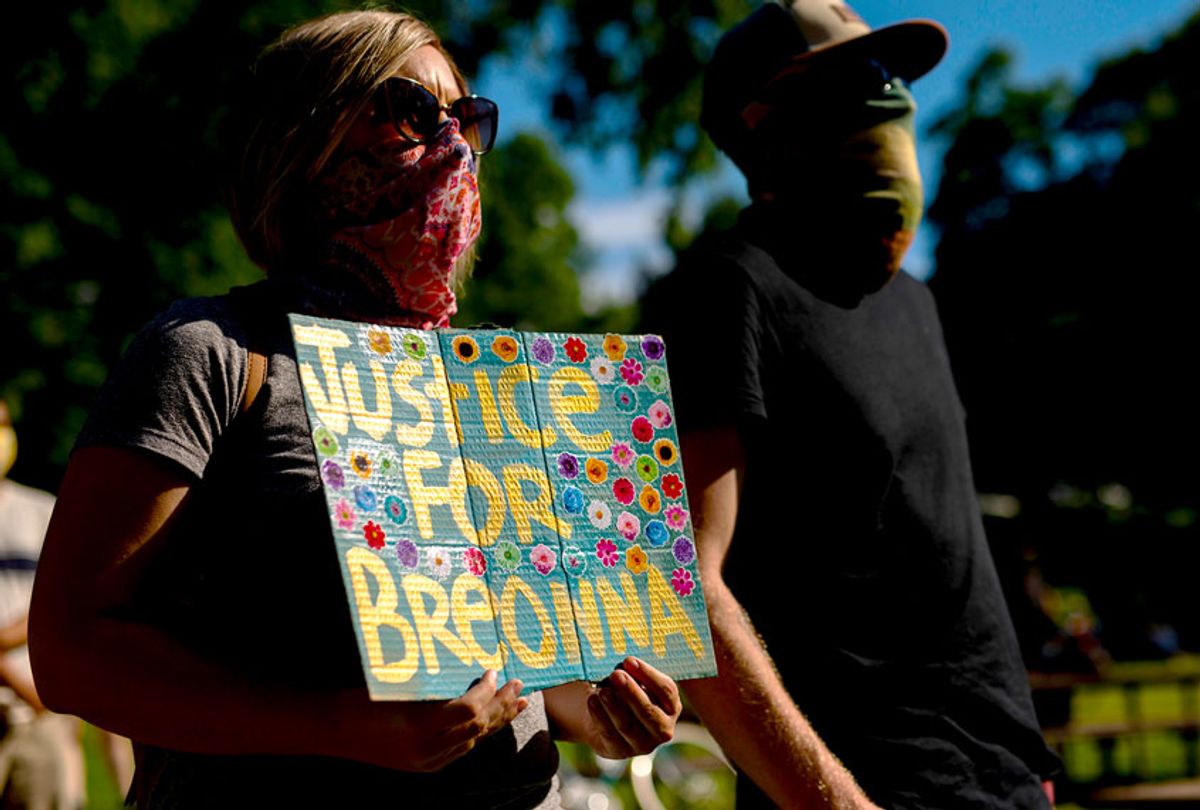 People gather in Powderhorn Park before a march honoring Breonna Taylor on June 26, 2020 in Minneapolis, Minnesota. Taylor was shot and killed by members of the Louisville Metro Police Department on March 13, 2020. (Stephen Maturen/Getty Images)
--

Although it was the brutal killing of George Floyd in Minneapolis on May 25 that set off huge protests all over the world, there's another name echoing in the chants of those demanding criminal justice reform: Breonna Taylor. The 26-year-old African-American woman and emergency medical technician was killed by police during a no-knock drug raid in Louisville, Kentucky on March 13.

Activists have been calling for the prosecution of the officers involved in that shooting. But writers Mariame Kaba and Andrea J. Ritchie, in an op-ed published on Essence Magazine's website on July 16, stress that prosecutions are not enough — and that Taylor's memory should be honored by a full-fledged abolition of the prison-industrial complex.

Taylor's death shows why no-knock raids, in drug cases, are a terrible idea — as journalist Radley Balko (who now writes for the Washington Post) pointed out time and time again in his articles for Reason Magazine. The main targets of the March 13 raid were Jamarcus Glover and Adrian Walker, who Louisville police suspected of selling drugs. Walker, a licensed gun owner, has said that during the raid, he believed he was the victim of a home invasion or a robbery and was acting in self-defense. Shots were exchanged, and Taylor was caught in the crossfire. No drugs were found during a search of the house.

One of the officers involved in the shooting, Brent Hankison, was fired from the Louisville Metropolitan Police Department, while two others were placed on administrative leave. So far, however, none of them have been arrested or prosecuted.

Kaba and Ritchie, in Essence, note: "The FBI and a special Kentucky prosecutor are investigating Breonna's killing and whether charges can be brought against the officers. We fully support demands for accountability for Breonna's death, and her family and loved ones' quest for justice. When agents of the state act violently against an individual — and in this case, callously and negligently takes their life — there is no doubt that collective responses are absolutely warranted and essential."

But Kaba and Ritchie quickly add that real justice for Taylor — as well as George Floyd — needs to involve comprehensive criminal justice reforms in the United States.

"As Prison Industrial Complex (PIC) abolitionists, we want far more than what the system that killed Breonna Taylor can offer — because the system that killed her is not set up to provide justice for her family and loved ones,"  Kaba and Ritchie emphasize. "Experience shows that officers who harm are rarely arrested by the departments that employ them, and prosecutions and convictions are even more unlikely. Since 2005 there have only been 110 prosecutions of police officers who shot people, while police have killed 1000 people a year on average since 2014."

Kaba and Ritchie go on to say that while police officers who use excessive force are given every benefit of the doubt in the U.S., many African-Americans are guilty until proven innocent under the country's criminal justice system.

"The officers who killed Breonna Taylor will claim self-defense because a confused, half-asleep person defending his home and his fiancée against what he reasonably believed to be a home invasion fired shots," Kaba and Ritchie write. "And, even if they are arrested and brought to trial —  if past experience is any indicator —  the law will once again provide them with cover for killing another black person. Meanwhile, countless black women and trans people who act in self-defense when police fail to protect them languish in prison."

In their article, Kaba and Ritchie call for a "broader and deeper conception of justice for Breonna Taylor and other survivors and family members harmed by police violence — one rooted in reparation."

"People who have been or who see their loved ones arrested, prosecuted, incarcerated, and killed for the slightest infraction — or none at all — want the system to act fairly by arresting, prosecuting and incarcerating those who harm and kill us," Kaba and Ritchie stress. "People who have consistently been denied protection under the law desperately want the law to live up to its promises."