Over 60 commercial hand sanitizers have been discovered to contain methanol, which can be deadly 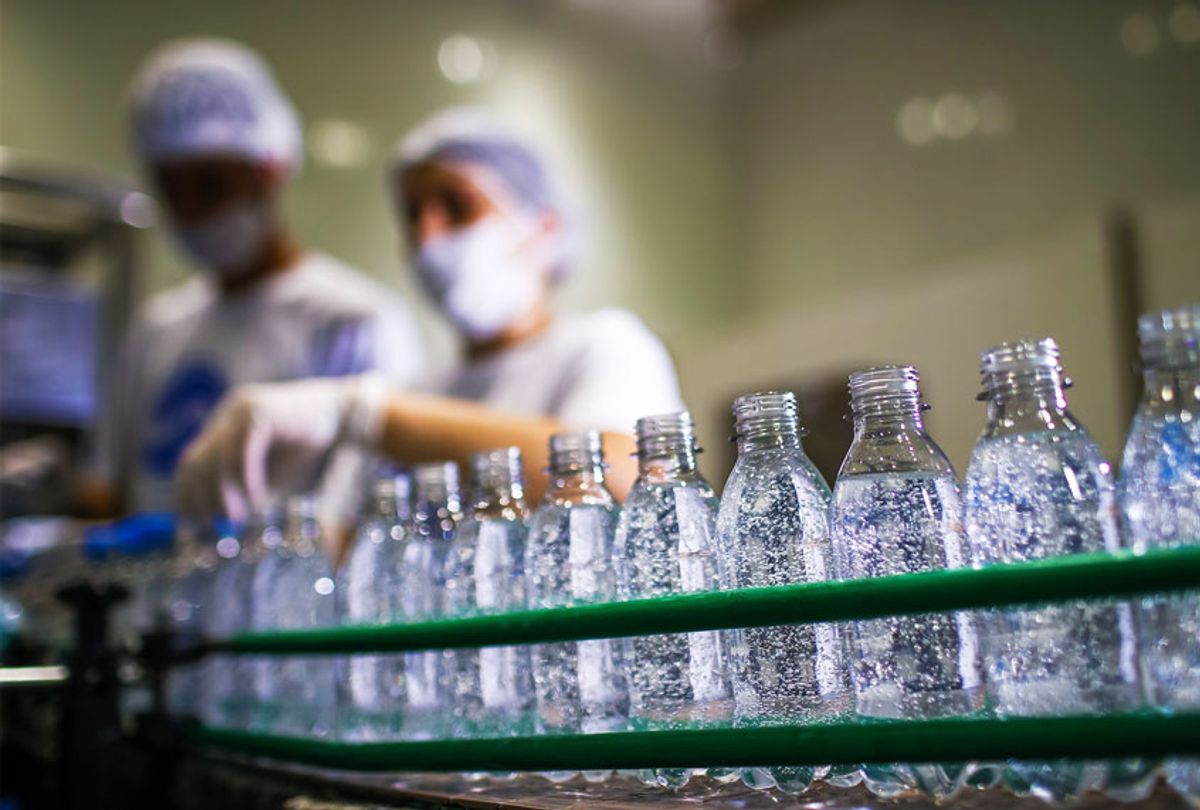 Workers in the hand sanitizer bottling process in AGE do Brasil factory on April 6, 2020, in Vinhedo, Brazil. (Buda Mendes/Getty Images)
--

Most hand sanitizers contain some form of alcohol, a disinfectant; yet as any distiller will tell you, not all alcohols are created equal. Inexperienced or unscrupulous chemists may accidentally create toxic alcohols, including one which can cause blindness.

Something like this appears have happened during the production of some hand sanitizer, a hot commodity during the global pandemic. Recently, the Food and Drug Administration (FDA) warned that some hand sanitizers that are labeled as containing ethanol (also known as ethyl alcohol, and what is in spirits) have tested positive for methanol, also known as wood alcohol. According to the FDA's recall list, there are 69 hand sanitizer products that they advise consumers not to use. On July 15, two more products were added to the list, both from manufacturer MXL Comercial SA de CV, which is based in Guanajuato, Mexico.

"Consumers and health care providers should not use methanol-containing hand sanitizers," said FDA Commissioner Stephen M. Hahn, M.D. in a statement on July 2. "The FDA remains committed to working with manufacturers, compounders, state boards of pharmacy and the public to increase the safe supply of alcohol-based hand sanitizers."

The precipitous increase in demand for hand sanitizer has made it a profitable pandemic business endeavor. Yet the possibility of methanol in some hand sanitizers could have some seriously grave, and sometimes deadly, consequences.

"It has a number of toxic effects, nausea, vomiting, headaches, blindness seizures, and coma," Aline Holmes, a professor of nursing at Rutgers University School of Nursing, told Salon in an interview. "It's especially deadly for children because even if they just touch a little bit, it could be absorbed through their skin . . . they put everything in their mouth, so even if they just accidentally had some on their hands and they put it in their mouth, it could be very deadly."

According to research published in 2017 in the Annals of Occupational and Environmental Medicine, an estimated oral dose of 3.2 to 11.9 grams of pure methanol is enough to cause blindness. A lethal dose from respiratory intake is reportedly between 4,000–13,000 mg. "Methanol can be easily absorbed during exposure through respiration, skin, and the gastrointestinal tract," researchers wrote. "Even a low dose of pure methanol through oral or respiratory exposure might be lethal or result in blindness as a clinical symptom."

Holmes explained that ingesting methanol is most dangerous, but that merely rubbing it on one's hands and having the chemical absorbed through skin can be nearly as bad.

"Even if you just get it on your skin, it can be absorbed into your skin — and the way it's metabolized in your body can lead to blindness, death or stroke," Holmes said.

The FDA explains in its statement that in June, the agency first warned consumers about products manufactured by Eskbiochem, which contained methanol. Since then, several of Eskbiochem's distributors have issued voluntary recalls.

"I was surprised that there would be any kind of methanol — or as we call it wood alcohol — in hand sanitizers," Dr. William Schaffner, a professor of preventive medicine at Vanderbilt University Medical Center told Salon. "Methanol can make you very very sick, with nausea and vomiting and headache. . . . you can get central nervous system toxicity with seizures."

Why would companies do this if it's so dangerous? Chalk it up to ignorance or companies trying to take advantage of this moment. The FDA commissioner believes that producers are "taking advantage of the increased usage of hand sanitizer during the coronavirus pandemic and putting lives at risk by selling products with dangerous and unacceptable ingredients." The FDA also said that during the pandemic poison control centers have had an increase in calls about accidental ingestion of hand sanitizer.

Dr. Stephen S. Morse, a professor of epidemiology at Columbia University Mailman School of Public Health, told Salon via email that methanol has a long history of being substituted when ethanol isn't available.

"In an earlier time, you'd hear about the . . . alcoholics who filtered the alcohol from Sterno cans (used to keep food hot) because they couldn't afford anything else," Morse said. "Many would go blind as a result, and some would die."

Dr. Morse added: "Methanol is cheaper than ethanol, and isn't taxed, but for many purposes just can't be substituted for the other alcohols."

Public health officials still recommend consumers use an alcohol-based hand sanitizer that contains at least 60 percent ethanol. Especially during the pandemic, hand sanitizer is always a great substitute if you can't wash your hands for 20 seconds with soap and water. The FDA said that if hand sanitizer says it's "FDA-approved," it could be a red flag since no hand sanitizers are approved by FDA.

Indeed, as Dr. Schaffner told Salon, one way to avoid the contaminated hand sanitizers is to stick to brands that are "well known." Many people have also tried to make their own hand sanitizer, although not everyone is in favor of do-it-yourself formulas.