Is this what democracy looks like? With federal goons in the streets, history hangs in the balance

Whether the Trump regime's Portland gambit is purely political or an attempted coup, the danger is enormous 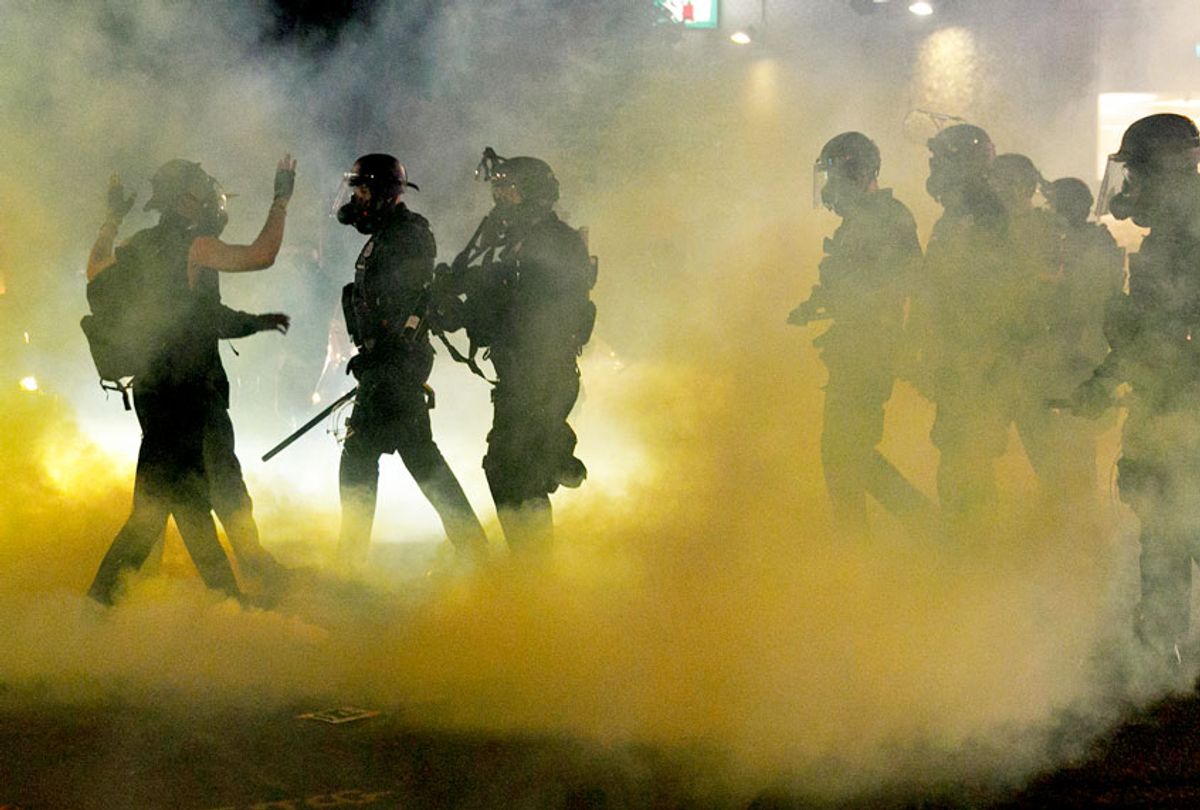 Let's have the decency not to pretend we weren't warned about this, shall we? Since virtually the day Donald Trump was elected, if not before that, people like journalist Masha Gessen and historian Timothy Snyder have told us that his presidency would be a sustained assault on democracy, and that America stood at a historical fork in the road, with at least one of the paths leading into darkness. We began to talk about "fascism" and "authoritarianism," and maybe those terms seemed metaphorical or melodramatic, for a while. Do they seem that way now?

It didn't feel like the end of democracy, did it? To use Gessen's language, did it feel like the dangerous moment between the "autocratic attempt" and the "autocratic breakthrough"? Not the way that alarming news reports from Hungary and Russia and Turkey and the Philippines do. The problem is, as history informs us, that we're not likely to notice such dangerous moments while they're happening. So the insults and outrages piled up and the news cycle grew ever more discordant and surreal, but there was still takeout and Netflix and Amazon. Life was about the same, for most people most of the time. Maybe it was all an "aberrant moment in time," in Joe Biden's immortal phrase. There was no Reichstag fire. There were no troops in the street. Not until now.

We can argue about whether Trump is simply the vector through which the authoritarian current flows — the Forrest Gump of fascism — or is, after his stupid-brilliant fashion, a very small Great Man of History. Both things can be true, which is effectively what Gessen argues in her new book "Surviving Autocracy." We can argue that this is all part of a larger global pattern of democratic crisis, which is clearly true, and that the United States had already become a degraded and dysfunctional pseudo-democracy in 2016, because only such a society could have allowed Trump to rise to power. Bernie Sanders literally went red in the face telling us that, over and over again, during his 2016 campaign. He sounded more like an Old Testament prophet than a presidential candidate, and made way too many normal people uncomfortable.

So, yes, a lot of us — probably all of us — should be called to account for how we got here. Because whatever we believe we did or didn't do, it wasn't enough, and here we are: Fourteen weeks before a presidential election, there are troops in the streets.

OK, we're not supposed to call them "troops." They're not members of the military. I don't think that improves matters. For the last week, armed men in camouflage uniforms marked as "POLICE," who do not seem to have recognizable insignias or badges, and do not have names on their uniforms, have been battling Black Lives Matter protesters in Portland, Oregon. But even the language we use to describe these events grows slippery — another consequence of encroaching authoritarianism, which drains the meaning out of ordinary words. These police are not real police, and the protesters in Portland (and many other places) have moved past the Black Lives Matter agenda to something much larger and more difficult to define. They are standing up against autocracy, I think we can say, while these so-called police are trying to enforce it.

These federal paramilitaries or pseudo-cops have reportedly been seeking or inflaming confrontations with Portland protesters since at least July 14, using tear gas or pepper spray and what are described, in Orwellian cop-speak, as "less-than-lethal munitions." One protester suffered a fractured skull after being shot in the head with one of these not-quite-bullets. These federal forces have also been driving around downtown Portland in unmarked vans, according to multiple reports, sometimes pulling suspected protesters off the street for questioning without making formal arrests.

Customs and Border Protection, one of the alphabet-soup agencies apparently supplying troops or officers or whatever we choose to call them to this effort, explained one such incident to the New York Times by claiming that "agents who made an arrest had information that indicated a suspect had assaulted federal authorities or damaged property and that they moved him to a safer location for questioning." CBP would not identify the agents in question or the suspect, and did not explain what its forces are doing in an American city 375 miles from the nearest international border.

Describing all this, Mary McCord, a Georgetown Law professor and former Department of Justice official — in other words, probably not a raging Marxist — told the Times, "This is the kind of thing we see in authoritarian regimes."

Indeed it is, which might raise the question of what kind of country this is in the summer of 2020. Let's give the big dogs of the mainstream press some credit here — after three-plus years of ceding rhetorical and political ground to the Trump regime, they have seized on the Portland story with evident alarm. ("Trump regime," by the way, is a term Salon's Chauncey DeVega frequently employs and that, as his editor, I often take out. This is not one of the times to take it out.) Both the New York Times and the Washington Post have made clear that these shadowy federal forces are on the streets of Portland under dubious legal authority, and against the objections of Mayor Ted Wheeler, Oregon Gov. Kate Brown and both of the state's U.S. senators, Jeff Merkley and Ron Wyden.

All those officials are Democrats, of course, which makes them illegitimate in the eyes of the Trump regime's toadies and defenders. One of the minor ironies embedded in this moment is that Wheeler and Brown are not exactly allies of Portland's protest movement, and over the preceding several weeks had alternately tried to placate the protesters and shut them down. Brown has repeatedly argued that "the presence of federal officers has inflamed the streets" rather than calming the situation, and says she told acting Homeland Security Secretary Chad Wolf to withdraw the troops: "I said it's like adding gasoline to a fire."

Wolf refused, and has issued statements that sound as if they were dictated by his boss in the White House, claiming that Portland "has been under siege for 47 straight days by a violent mob," and that "each night, lawless anarchists destroy and desecrate property." Brown's conclusion, as she told the Washington Post, is that federal forces are deliberately provoking confrontation, "purely for political purposes."

Greg Sargent and Paul Waldman of the Post took this a step further in an opinion article published Friday, observing "that the bigger picture is that it's plainly obvious that the government is trying to inflame the situation":

We know Trump wants these scenes to be playing out on people's televisions in faraway states, such as — to select a few at random — Wisconsin, Michigan, Pennsylvania, Arizona and Florida.

And given that his homeland security chief is actively ignoring local officials' demands that he pull out federal law enforcement — in a manner that those officials say is inflaming the situation — it's reasonable to surmise that escalation is the whole point of these exercises in the first place.

It's entirely sensible to perceive nearly everything Trump does as cynical showmanship calculated (whether rightly or wrongly) to improve his dwindling chances of re-election. But it may not be sufficient. The president and his sniveling retinue of "acting" factotums up and down the national security chain may not have a coherent master plan to rip out the rest of American democracy by the roots and replace it with something more to their liking. But that is unquestionably what their collective hive-mind desires, and there are people behind them, just out of view, who are willing and able to articulate such an agenda clearly.

That's generally how fascism seems to work. This is a disputed historical point, but it doesn't appear that even the Nazi regime articulated a clear and explicit policy of exterminating as much of Europe's Jewish population as possible. That was a decision that emerged gradually, and almost inevitably, from that regime's insane internal logic.

Is it an irrelevant side note to mention how many key posts in the Trump administration are held by acting officials? I don't think so: That speaks to the feudal or monarchic or fascistic character of the Trump regime, and no president in recent history has conducted his affairs in remotely similar fashion. Wolf, the acting DHS secretary, has not been confirmed by the Senate; neither has his acting deputy, Ken Cuccinelli, who is also the acting director of Citizenship and Immigration Services. Neither has Mark Morgan, the acting director of CBP. Neither has Matthew Albence, the acting head of ICE, or his acting deputy, Derek Benner. (Albence's chief of staff does not require congressional approval, but for some reason he's "acting" too.)

What exactly are all these wormy white men in temporary posts under a cratering presidency up to? It isn't something good. What's happening in Portland is distinctive in various ways — a small city, far from the media capitals, known, with some justification, as a hotbed of anarchist activism — but not isolated. We first saw these ambiguous "federal police," seemingly operating under the direct authority of Attorney General Bill Barr, on the streets of Washington in early June, before and after President Trump's famous photo-op sojourn across Lafayette Park.

There are numerous reports that these goons, drawn from a laundry list of federal law enforcement agencies most of us had never previously heard of, have been seen on the ground in other cities, including Buffalo, Las Vegas, San Diego and Seattle. Less clear accounts suggest they have been used in numerous other places as well: For instance, the New York Times mentioned on Friday, almost in passing, that CBP "drones, helicopters and planes" have been used to conduct surveillance of BLM protesters in at least 15 cities.

We can, I think, discern a pattern here without venturing too far into paranoia. As has happened throughout the Trump presidency, the so-called norms are being stretched to the breaking point. This paramilitary, fascist-curious crackdown is being beta-tested — on the thinnest possible legal and constitutional grounds — in a series of middle-sized, second-tier cities, where national media may not notice right away and local activists may be viewed as radical hotheads.

To this point, Wolf and Cuccinelli and Morgan and their underlings have eagerly dialed up the rhetoric, vowing not just to crush the Portland protests but to bring down the hammer of so-called federal authority with even more enthusiasm in more places. That too is part of the beta test: Trump needs them to play Mouth of Sauron, both because he lacks the courage or conviction to say those things flat out, and because he requires the latitude to throw those guys overboard if this flirty little coup-experiment blows up in his face.

What's the endgame strategy here? Is all of this "purely political," as Kate Brown said, aimed at terrifying a few white suburbanites in "battleground states" into believing that only Trump can save them from rampaging antifa hordes who want to steal their homes for government-funded Black Marxist communes? Or is this an ingenious backdoor attempt at imposing martial law, Keystone Kops-style (since the actual military wouldn't do it), with a hopeful eye toward canceling or nullifying the election and declaring democracy on hold?

As I said above, when it comes to Donald Trump and the dangerous currents that flow through him, both things can be true. Either way, there are "paramilitary squads," in Sen. Ron Wyden's words, on the streets of an American city. History will judge us for how we respond.