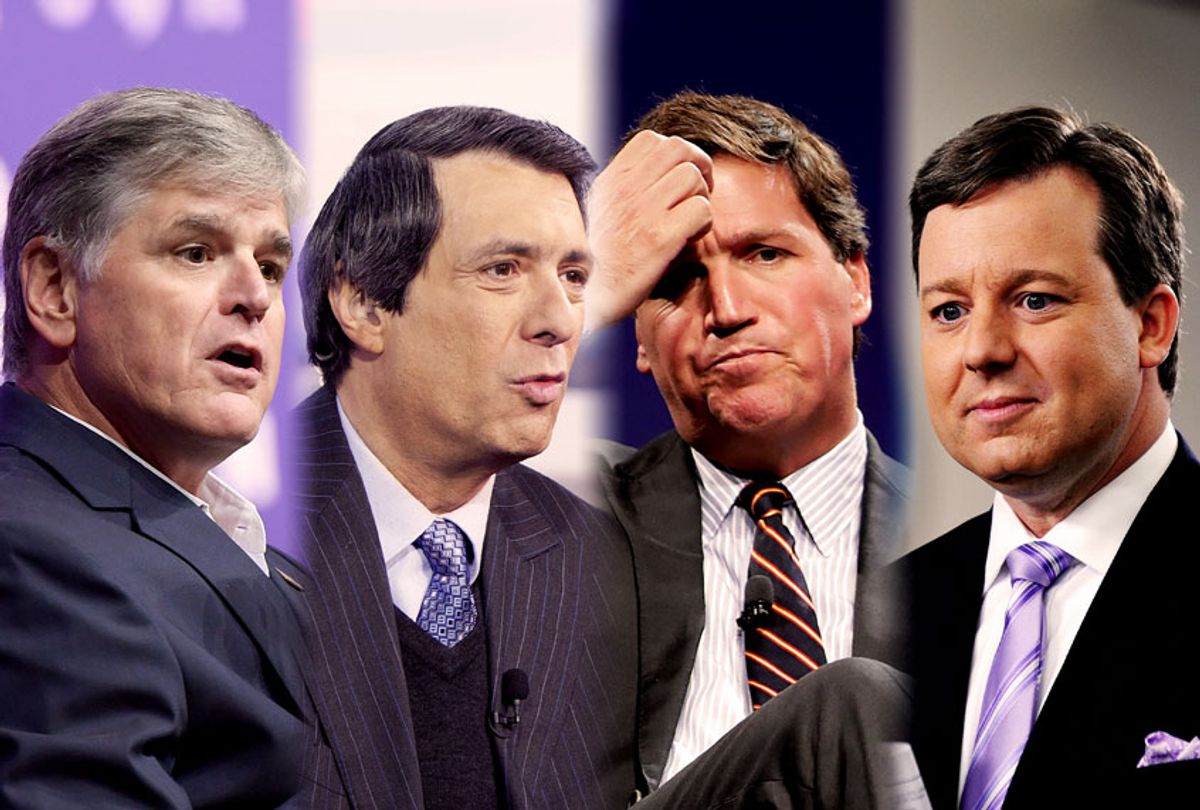 Editor's Note: This article references a lawsuit containing extremely graphic material that is sexual and violent in nature.

Two women filed a lawsuit against Fox News in a New York federal court Monday, alleging rape and sexual harassment at the hands of some of the network's top talent, including the recently fired Ed Henry and primetime stars Sean Hannity and Tucker Carlson.

Jennifer Eckhart, a former associate producer at Fox Business, accuses Henry, the former co-anchor of "America's Newsroom," of rape and other forms of sexual violence. Her co-plaintiff, Cathy Areu, a regular guest on the network, filed sexual harassment claims against Henry, as well as Hannity, Carlson and the "Media Buzz" host Howard Kurtz. The four men have also been sued in their individual capacities.

Michael J. Willemin, an attorney who represents the women along with veteran sexual misconduct litigator Doug Wigdor, told Salon that Fox News had been informed of Areu's allegations against Carlson on July 9, four days before the host announced that he would be taking a "pre-planned vacation."

A Fox News spokesperson confirmed in an email that the network had learned about Areu's claims against Carlson on July 9 — and "promptly investigated them."

"Tucker is still employed, and this has zero to do with his vacation, which was legit and pre-planned," the spokesperson added.

The legal complaint is itself so graphic in nature that it includes a trigger warning: "This document contains contains highly-graphic information of a sexual nature, including sexual assault." At length, it details Henry's alleged attempts to groom Eckhart, who claims she was asked to be his "little whore" and "sex slave." Henry allegedly threatened Eckhart with punishment and retaliation if she did not comply with his demands.

According to the document, Eckhart was ultimately left "violently raped while helpless and restrained in metal handcuffs," while Henry "performed sadistic acts on her without her consent that left her injured, bruised and battered with bloody wrists."

The suit claims that Henry had earlier forced Eckhart to perform oral sex on him on network property before raping her at a hotel where Fox often hosted visiting employees, "thereby facilitating, whether knowingly or unknowingly, Mr. Henry's conduct."

Henry allegedly abused Areu with "a slew of wildly inappropriate sexual images and messages" for several months this year, according to the complaint. The texts, which allegedly remain in the possession of Areu, include "a 'closeup' photograph of a woman's vagina being 'clamped' closed by four clothespins" and a video titled "Fastest Interview ... candidate selected in 3 seconds."

According to the filing, the video features a woman job candidate exposing her vagina to the interviewer, who then selects her for the job. Immediately after Henry sent the video, he allegedly added: "Are you avail for anchor interview."

Network executives allegedly knew about Henry's misconduct as far back as early 2017, when several women accused him of "sexually inappropriate conduct" amid a company-wide probe into sexual harassment at the channel.

A Fox News spokesperson disputed the suggestion. "There were not sexual harassment claims against Ed Henry at FOX News prior to Jennifer Eckhart's claim on June 25, 2020," the spokesperson said in an email.

The complaint alleges that the network did not take substantive disciplinary action against Henry, instead rewarding him with a promotion to co-anchor on "America's Newsroom," as well as a streaming show on Fox Nation. Additionally, the suit claims that HarperCollins, a Fox-affiliated imprint, signed Henry to a lucrative book deal.

Fox News only took action against Henry ahead of the lawsuit, according to the claim. However, the network allegedly did not inform Eckhart, leaving her to learn the news on Twitter and in press reports.

"It's heinous to do that to a victim like this — to force her to see him all over the news," Willemin told Salon.

"At that point, they had already been aware that we had represented her for two weeks," Willemin said.

For a period of time, Areu had been a regular featured guest on "Hannity," "Tucker Carlson Tonight" and "Media Buzz." She claims that the hosts of all three programs cut her appearances after she pushed back against unwanted advances.

Areu claims that on March 18, 2018, Hannity, in front of the full studio crew, threw $100 on the desk of his set and repeatedly demanded that one of the men in the room take her out on a date.

Areu claims that she was "stuck" and unable to leave, because she was still "hooked into" studio equipment, which could only be removed by a stagehand. None of the staff took up Hannity's challenge; he allegedly never invited Areu back thereafter.

Areu describes a similar setup as a guest on Carlson's show, when an unidentified producer or writer allegedly whispered in her ear to stay put until the program was off air. She claims that no one would undo her equipment on set, making it impossible to leave. Carlson then allegedly invited Areu to his hotel room, where he specified that his wife would not be present. When she refused, her invitations to be on the show allegedly stopped.

Areu documents a similar interaction with Kurtz, after which she accuses him of retaliating by cutting her appearances on his show.

Fox News provided Salon with a lengthy statement, which denied all allegations of wrongdoing and suggested that Eckhart lacks standing to sue the network. The network requested that Salon print the statement in full:

Based on the findings of a comprehensive independent investigation conducted by an outside law firm, including interviews with numerous eyewitnesses, we have determined that all of Cathy Areu's claims against Fox News, including its management as well as its hosts Tucker Carlson, Sean Hannity and Howard Kurtz and its contributor Gianno Caldwell, are false, patently frivolous and utterly devoid of any merit. We take all claims of harassment, misconduct and retaliation seriously, promptly investigating them and taking immediate action as needed — in this case, the appropriate action based on our investigation is to defend vigorously against these baseless allegations. Ms. Areu and Jennifer Eckhart can pursue their claims against Ed Henry directly with him, as Fox News already took swift action as soon as it learned of Ms. Eckhart's claims on June 25 and Mr. Henry is no longer employed by the network."

"We expect Fox News to claim – as it almost always does – that an 'independent' investigation found no evidence of wrongdoing," Wigdor's office said in a statement.

Wigdor claimed that the network's investigation did not include interviews with either woman, who both offered to meet under "reasonable conditions." He called on Fox News to interview them in the name of public transparency.

A Fox spokesperson told Salon in an email that the investigators had requested a meeting with each plaintiff, with their attorneys present, and asked the women to provide evidence supporting their claims. The Wigdor firm declined, the spokesperson said, saying that the women would not sit for an interview "unless investigators promised that anything either plaintiff said could not be used in any future litigation or proceeding." The network found those demands unreasonable, the spokesperson said, because "evidence cannot be suppressed or hidden in this manner in litigation."

The first paragraph of the complaint says, "Fox News would have the public believe that it is a different place from the Fox News that was run by former disgraced Chairman and CEO Roger Ailes. Unfortunately, it is actually worse."

You can read the full complaint here.