Trump has defended having military installations named after generals who fought against the U.S. Army 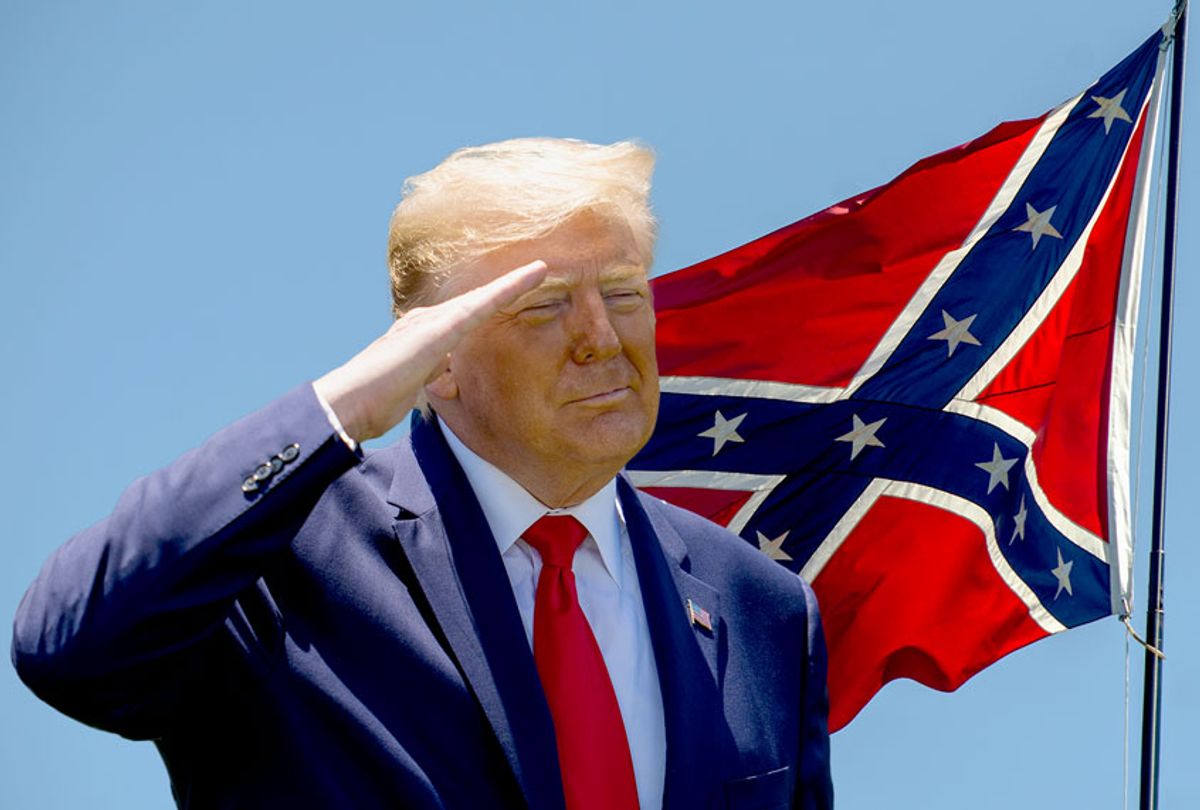 President Donald Trump, in an obvious effort to rally his MAGA base, has been vigorously defending the display of Confederate images. But on Friday, the Pentagon officially listed what types of flags can be displayed on U.S. military installations — and the Confederate flag, according to New York Times reporter Helene Cooper, does not appear to be allowed.

Cooper reports that under the "guidance" issued by Defense Secretary Mark Esper, "appropriate flags include those of American states and territories, military services and other countries that are allies of the United States. The guidance never specifically says that Confederate flags are banned, but they do not fit in any of the approved categories."

A Defense Department official, who spoke to the Times on condition of anonymity, said of the list, "Problem solved, we hope."

Cooper reports, "That senior military leaders are contorting themselves to such an extent shows the gap that has developed between the White House and the movement for racial justice that has swept across the country since the killing of George Floyd by the Minneapolis police in May. As protests ignited, senior Defense Department officials began grappling with the legacy of racism in the military."

Trump has defended having military installations named after generals who fought against the U.S. Army in the Confederate Army during the Civil War of the 1860s. But when Gen. Mark Milley appeared at a U.S. House of Representatives hearing last week, the chairman of the Joint Chiefs of Staff recommended that the Pentagon take "a hard look" at renaming military bases that are presently named after Confederate officers.

At the hearing, Milley told members of Congress, "There is no place in our armed forces for manifestations or symbols of racism, bias or discrimination."

...history of Winning, Victory, and Freedom. The United States of America trained and deployed our HEROES on these Hallowed Grounds, and won two World Wars. Therefore, my Administration will not even consider the renaming of these Magnificent and Fabled Military Installations...

Many of Trump's critics have argued that having military bases named after Confederate officers is not only racist, but also, unpatriotic — as the Confederate Army wanted to separate from the United States and have a different government from the one in Washington, D.C. Pro-slavery Confederate leaders like Gen. Robert E. Lee and Gen. Stonewall Jackson, Trump's critics have been pointing out, fought against the U.S. Army, not with it.

According to Cooper, the memo Esper issued on Friday, "goes after the many American soldiers, Marines and airmen who display Confederate flags and other symbols in their barracks and in parking lots on military installations."

Esper said in the memo: "Flags are powerful symbols, particularly in the military community for whom flags embody common mission, common histories and the special, timeless bond of warriors…. The flags we fly must accord with the military imperatives of good order and discipline, treating all our people with dignity and respect, and rejecting divisive symbols."