Trump working with Bush torture lawyer to cut Congress out of lawmaking: report 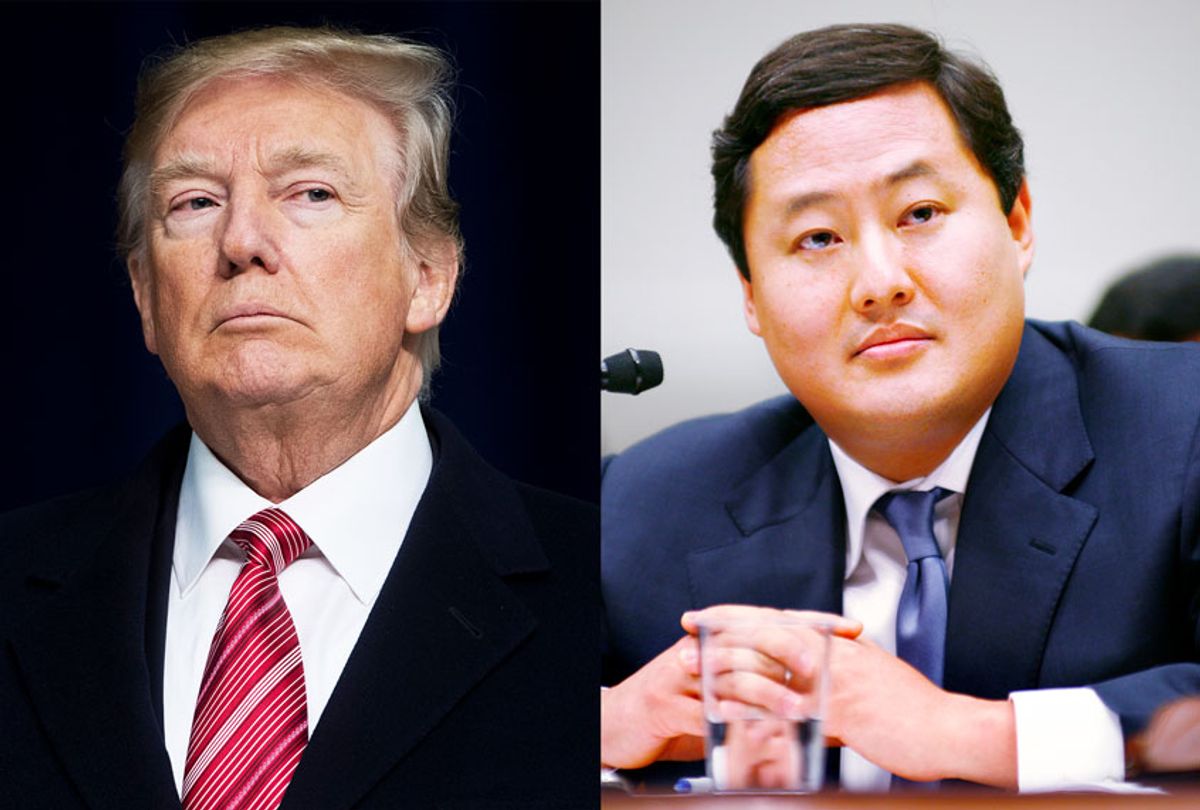 President Donald Trump suggested in a Fox News Sunday interview that he planned to act beyond his legal authority to implement sweeping changes to immigration and health care policies based on an interpretation of a recent Supreme Court ruling granting him "powers that nobody thought the president had."

Axios reported that the legally precarious strategy, which cuts Congress out of the lawmaking process, relies on a theory of executive power floated in June by John Yoo, the George W. Bush administration lawyer who drafted the memo justifying the use of torture as an interrogation technique.

The first of the controversial orders will cover immigration, per Axios. Trump told Fox News Sunday host Chris Wallace that he would also invoke the authority to create "a full and complete health care plan."

The Supreme Court gave the president of the United States powers that nobody thought the president had by approving, by doing what they did — their decision on DACA. And DACA's going to be taken care of also. But we're getting rid of it, because we're going to replace it with something much better. What we got rid of already, which was most of Obamacare —  the individual mandate. And that I've already won on. And we won also on the Supreme Court. But the decision by the Supreme Court on DACA allows me to do things on immigration, on health care, on other things that we've never done before. And you're going to find it to be a very exciting two weeks.

While the orders may be illegal, Trump would likely be able to run out the clock in the courts until Election Day, according to Yoo. It would also create legacy headaches for any successor, who would have to enforce the laws unless and until the courts overturn them, Yoo claimed.

"Suppose President Donald Trump decided to create a nationwide right to carry guns openly," Yoo wrote. "He could declare that he would not enforce federal firearms laws, and that a new 'Trump permit' would free any holder of state and local gun-control restrictions."

"Even if Trump knew that his scheme lacked legal authority, he could get away with it for the length of his presidency," he added. "And, moreover, even if courts declared the permit illegal, his successor would have to keep enforcing the program for another year or two."

"According to Chief Justice Roberts, the Constitution makes it easy for presidents to violate the law, but reversing such violations difficult — especially for their successors," he concluded.

Yoo is most famous for what has become known as the "torture memo," which justified the Bush administration's use of waterboarding via a constitutional reading called "the unitary executive theory."

As the theory goes, in wartime a president can exercise virtually unlimited authority, which can only be checked by Congress' spending power. Because the "war on terror" might not have a definitive end, the president would have nearly dictatorial power in this realm for the foreseeable future, including deploying federal troops for police actions and suspending the Fourth Amendment's ban on unreasonable searches and seizures.

Axios reported that Yoo's article has been spotted on Trump's desk, and the president had brought it up in meetings with aides. Yoo told the outlet that he had discussed the theory with White House aides in recent virtual meetings.

When Trump first mentioned the plan, in a recent Telemundo interview, he drew fire from within the Republican tent. Not only would the order include DACA, which the administration just spent years fighting to overturn, Trump claimed it would also create a path to citizenship, as well.

"I'm going to make DACA a part of it," said the president. "We're going to have a road to citizenship."

The White House immediately walked back that claim, which runs the risk of alienating GOP immigration hawks, as well as the anti-immigrant base which carried Trump through the 2016 primaries and general election.

"This does not include amnesty," White House spokesman Judd Deere said in a statement.

Fellow Republican Sen. Ted Cruz of Texas quickly tweeted that "it would be a HUGE mistake if Trump tries to illegally expand amnesty."

"There is ZERO constitutional authority for a President to create a 'road to citizenship" by executive fiat," he wrote.

At the same time, Trump said he would change over to a merit-based immigration system, as opposed to one based on family connections, something which anti-immigration hardliners like senior White House adviser Stephen Miller have wanted for years.

Under Trump's earlier "merit-based" proposal, immigrants would be selected through a point-based system, which scores for "extraordinary talent, professional and specialized vocations and exceptional academic track records." However, the Republican-led Senate was not on board.

In 2018, Trump offered a path to citizenship as a concession to get Congress to authorize $25 billion for his wall along the Mexican border, but lawmakers balked. In 2019, the Democratic-led House passed a bill which would allow Dreamers to apply for citizenship, but the Senate still has not voted on it. The White House said at the time that Trump would veto such a bill.

It was not immediately clear how Trump would craft such an executive order to create a health care plan. He made the "repeal and replace" of Obamacare a cornerstone of his 2016 campaign, but all efforts to secure enough Republican votes in Congress failed.