Coronavirus is surging in the Corn Belt, but our Trump-loving governor wants to order all kids back to school 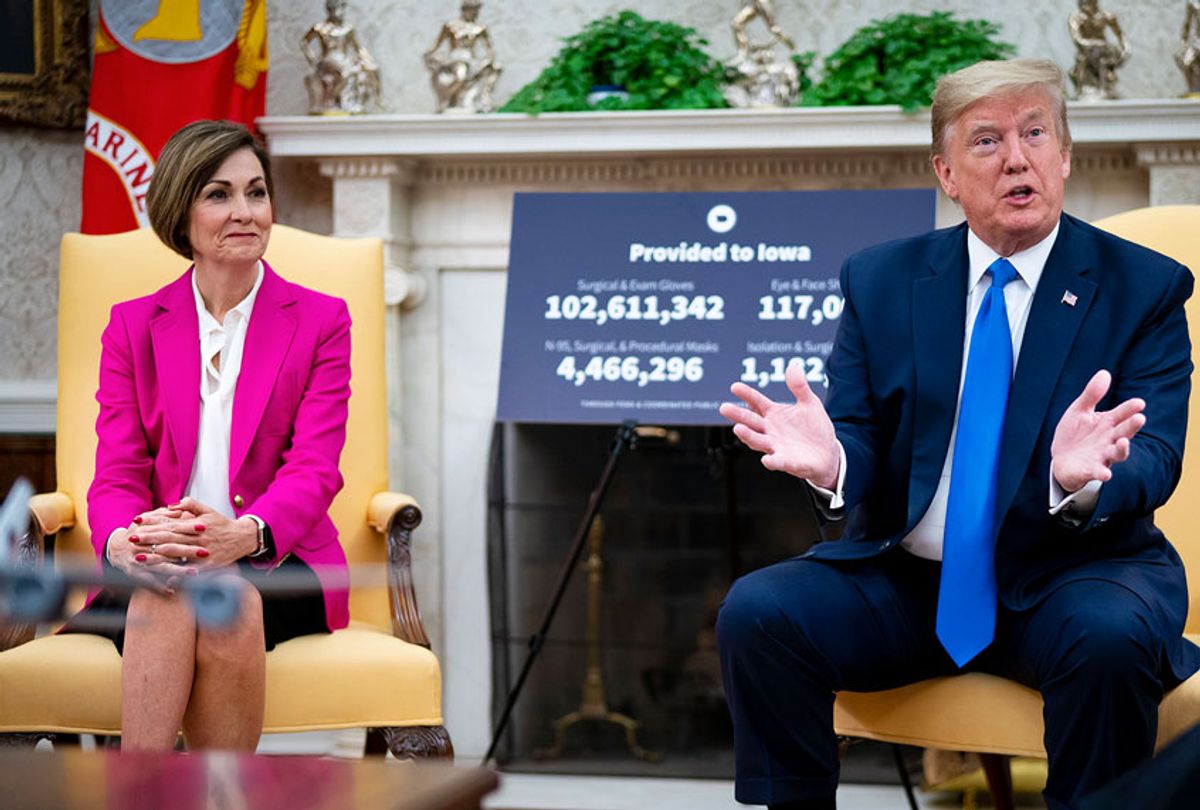 U.S. President Donald Trump meets with Iowa Governor Kim Reynolds in the Oval Office at the White House as he continues to promote re-opening business during the coronavirus pandemic (Doug Mills-Pool/Getty Images)
--

On the same day that Iowa marked its highest number of COVID-19 cases since the beginning of the pandemic, after three weeks of rapid increase, Republican Gov. Kim Reynolds defended her refusal to pass a statewide mask requirement and issued a proclamation mandating that all public schools provide in-person classes within weeks.

Employing the Orwellian rhetoric of the Trump administration, Reynolds hailed the "important milestones in our recovery," just as an unpublished report from the White House Coronavirus Task Force ranked Iowa as one of 18 "red zone" states that lacked stringent enough mask rules and social-distancing regulations.

It gets stranger: Iowans can't even visit Chicago now, according to a new emergency travel rule imposed by the Chicago Department of Public Health, unless they agree to a 14-day quarantine.

Iowa is not just a state in denial — it's quickly descendng into a state of negligence.

On a state level, Iowa's testing procedures have been wracked with delays and errors.  En route to work with the governor and the legislature, two state lawmakers had to retake their coronavirus tests, due to "damaged" samples. Last week, state auditor Rob Sands issued a report that found Iowa's no-bid contract with an out-of-state company violates state law through its four-step rerouting of test results, which are reportedly sent first to Utah before reaching Iowa health officials, and cause an "unnecessary risk of error, equipment failure, maladministration, [and] outright falsification."

But it's not just incompetence that plagues Iowa — or the mind-boggling antics of a right-wing legislature intent on passing the most extreme laws on abortion and guns that sporadically push our state into the national headlines. (In case you missed it, even blind people have a right to own and use guns in Iowa, according to a 2011 state law.)

Iowa has become the petri dish of the Trump White House's reckless policies.

When the White House issued an executive order in late April, invoking the Defense Production Act to keep open all meatpacking plants during the worst moment of the pandemic outbreak in the industry, Reynolds flew to the White House within days to pass on her "sincere thanks."

Even as the virus ravaged meatpacking plants in Iowa, Trump and Vice President Pence hailed Reynolds and her state as a "success story" for testing and mitigation. Our governor's glowing response:  "We've turned the corner."

A week later, Iowa meatpacking plants ranked the worst in the nation in an independent assessment. With more than 1,300 cases, a single meatpacking plant in Waterloo, Iowa, still ranks in the top 15 worst clusters, according to an analysis by the New York Times. Families of three deceased meatpackers are now suing the Tyson company for knowingly and intentionally putting "profits over the health, safety and well-being of their Waterloo employees."

When the White House demanded last week that all children attend school in the fall, contradicting Centers for Disease Control guidance, Reynolds responded within hours, jettisoning her long-time advocacy for local control and rejecting local district policies in Des Moines, Iowa City and other cities. Instead, she demanded that "all state agencies, school districts, and other local governmental bodies and agencies shall take all efforts to prepare to safely welcome back students and teachers to school in-person this fall."

When the Trump administration reneged on promises to include exemptions for ethanol in the final renewable fuel standard last December, angering Iowa corn farmers, Reynolds deflected any criticism of the White House, instead placing the blame on the Environmental Protection Agency.

Last spring, Reynolds couldn't even bring herself to defend the state's impressive wind energy policies when Trump visited the state and famously declared that the wind turbines "cause" cancer. Reynolds crafted a painstakingly nonsensical response: It wasn't "her place" to counter the president, she said. "You know how those things change — one year coffee is good for you, the next year coffee causes cancer. I mean, that's just what happens."

No, things don't just happen in Iowa. We're used to a lot of political doublespeak and crap. (A research engineer with the University of Iowa recently found that the state's nearly 24 million hogs produced more fecal waste per square mile than the entire state of California; in a state of 3 million people, the porcine population pumped out waste equivalent to that produced by 83.7 million.)

When the governor's car recently struck a Black Lives Matter protester in Des Moines, Reynolds called it an appropriate action.

As executive of one of the few states to refuse to enact a COVID-19 lockdown or issue statewide mask requirements, Reynolds likes to say she "believes in Iowans." Last week, though, the longtime spokesperson for the Iowa Department of Health was forced out of office, thanks to her efforts to provide more information to journalists. "Response to this pandemic has become political and I think we've seen that all across the country," lamented Polly Carver-Kimm, who had spent 12 years in her role as the state spokesperson.

But playing politics with wind turbines and pigs and corn, notwithstanding Iowa's devastating role in contaminating the Gulf of Mexico's "dead zone," has its limits when a failing state government requires your children to attend school in a time of a deadly pandemic.

In May, Reynolds made national news with her bizarre disclaimer that we couldn't afford to "prioritize lives over livelihoods." She insisted business must go on.

But the lives of children are our priorities. Iowa's governor may want to make our children the experimental subjects in Donald Trump's heartland petri dish, but Iowans won't stand for it anymore.