Ocasio-Cortez scolds Ted Yoho for using "abusive language" against her: “I am someone’s daughter"

"My father, thankfully, is not alive to see how Mr. Yoho treated his daughter," Ocasio-Cortez responded 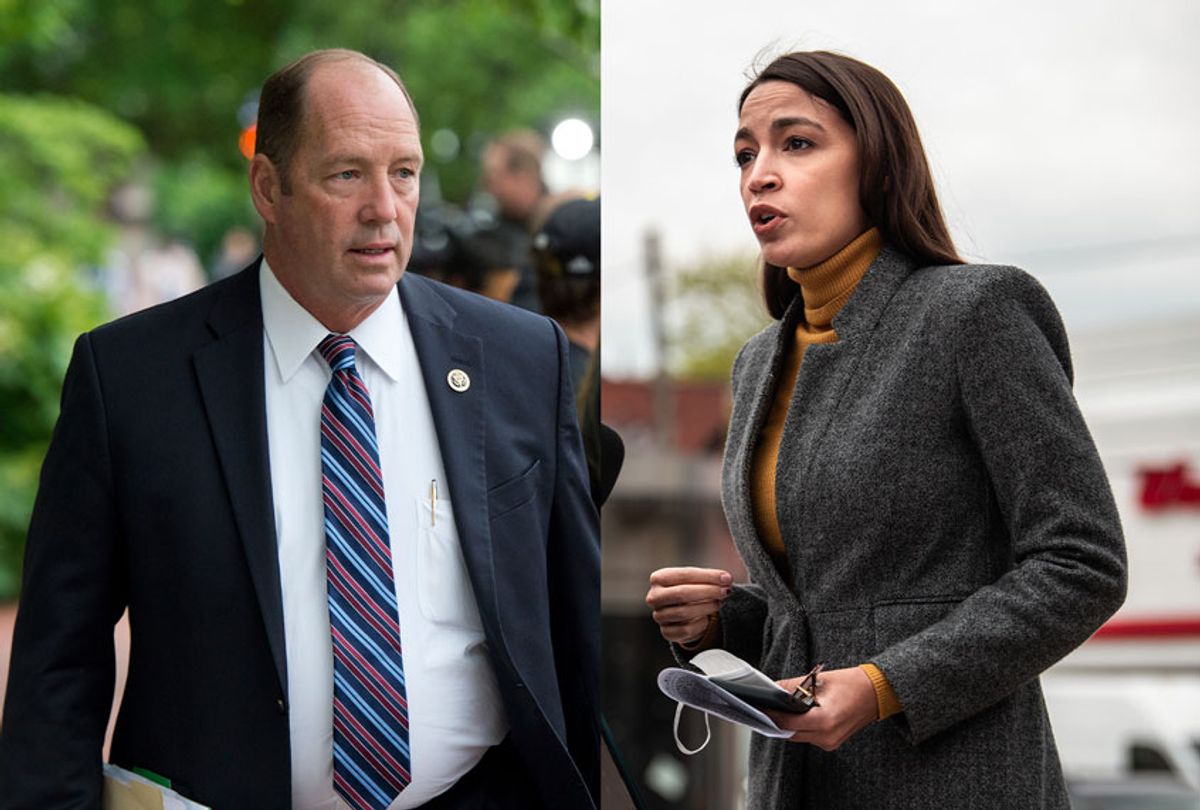 Rep. Alexandria Ocasio-Cortez, D-N.Y., called out Rep. Ted Yoho, R-Fla., on the floor of the House of Representatives Thursday after the Republican reportedly called the freshman Democrat a "f*cking b*tch."

Repeating the sexist slur Ocasio-Cortez said was used against her, the congresswoman  rejected the "excuses" Yoho made for his behavior.

"Mr. Yoho mentioned that he has a wife and two daughters. I am two years younger than Mr. Yoho's youngest daughter. I am someone's daughter, too. My father, thankfully, is not alive to see how Mr. Yoho treated his daughter," Ocasio-Cortez said in the floor speech. "My mother got to see Mr. Yoho's disrespect on the floor of this House towards me on television, and I am here because I have to show my parents that I am their daughter and that they did not raise me to accept abuse from men."

On Monday, Yoho approached Ocasio-Cortez on the Capitol steps, where he confronted her for suggesting that poverty and unemployment were to blame for the recent uptick in crime in New York. Yoho called Ocasio-Cortez "disgusting" and "out of your freaking mind" within earshot of reporters, according to The Hill's Mike Lillis. Ocasio-Cortez told the Republican that his comments were "rude."

"F*cking b*tch," Yoho was clocked as saying after the pair had parted ways.

"That kind of confrontation hasn't ever happened to me — ever," Ocasio-Cortez said after the incident. "I've never had that kind of abrupt, disgusting kind of disrespect levied at me."

"I never spoke to Rep. Yoho before he decided to accost me on the steps of the nation's Capitol yesterday," she added on Twitter. "Believe it or not, I usually get along fine w/ my GOP colleagues. We know how to check our legislative sparring at the committee door. But hey, 'b*tches' get stuff done."

Though Yoho apologized Wednesday on the House floor for the "abrupt manner of the conversation," he denied calling Ocasio-Cortez a derogatory term. His office said in a statement to CNN that he "made a brief comment to himself as he walked away summarizing what he believes her policies to be: bullsh*t."

Yoho said he was "very cognizant" of his language, because he is a father. He added that he had never used the "offensive name calling attributed to me by the press."

"I will commit to each of you that I will conduct myself from a place of passion and understanding that policy and political disagreement be vigorously debated with the knowledge that we approach the problems facing our nation with the betterment of the country in mind and the people we serve," he said. "I cannot apologize for my passion or for loving my God, my family and my country."

Ocasio-Cortez rejected his attempt at an apology on Twitter.

"It was verbal assault," she wrote. "This is not an apology."

"He didn't even say my name," she added.

Ocasio-Cortez followed up Thursday by saying that Yoho's apology had made "excuses for his behavior."

She said the comments were "not deeply hurtful or piercing," because she has "tossed men out of bars that have used language like Mr. Yoho's."

Speaker of the House Nancy Pelosi, D-Calif., backed Ocasio-Cortez during a Thursday news conference, saying Republicans had called her "names" for decades.

"There's no limit to the disrespect or the lack of acknowledgement of the strength of women," she said. "Nothing is more wholesome for our government, for our politics, for our country, than the increased participation of women. And women will be treated with respect."

Prior to the floor speech, Ocasio-Cortez appeared to embrace the Republican attack by posting a video of herself in front of the Capitol set to Doja Cat's "Boss Bitch."

"You know what we say when fragile men call us b*tches because we stand up for ourselves and other human beings?" she wrote. "Shine on, fight for others, and let the haters stay mad."