McConnell shutters Senate with the U.S. on verge of economic catastrophe 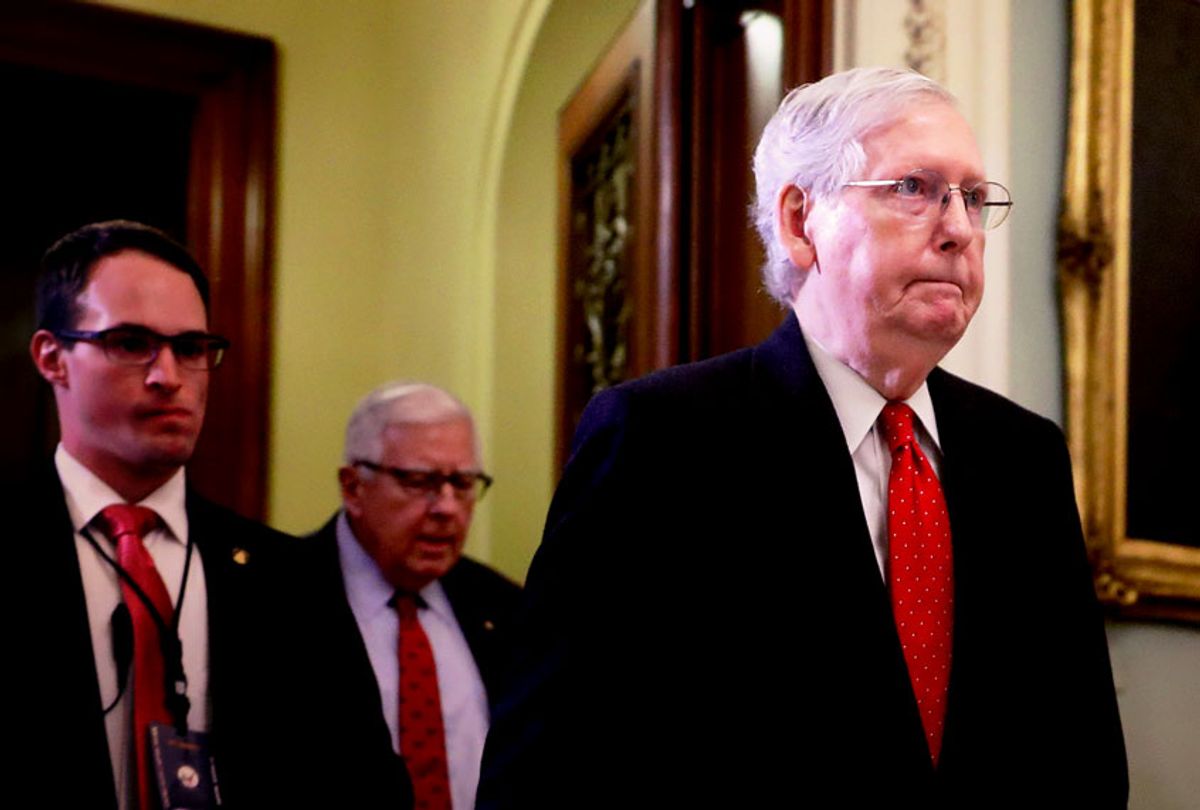 Senate Majority Leader Mitch McConnell (R-KY) leaves the Senate Chamber during a recess in President Donald Trump's impeachment trial at the U.S. Capitol January 21, 2020 in Washington, DC. Senators will vote Tuesday on the rules for the impeachment trial, which is expected to last three to five weeks. (Chip Somodevilla/Getty Images)
--

As Senate Republicans headed home for the weekend without extending unemployment insurance benefits or approving other economic relief programs that could help millions of Americans weather the ongoing financial catastrophe of the coronavirus pandemic, progressives and congressional Democrats warned that disaster is on the horizon.

"This whole house of cards is going to collapse," Rep. Dan Kildee (D-Mich.) warned during a press conference Friday afternoon.

'This whole house of cards is going to collapse' — @RepDanKildee explains why Republicans should want to extend unemployment benefits on an economic basis even if they can't 'conjure empathy' for American families pic.twitter.com/7fD9bkCEdQ

As Common Dreams reported, the departure of the GOP-controlled Senate for the weekend without a resolution to the benefits questions earned the upper chamber's leadership a harsh rebuke in a speech from Sen. Ron Wyden (D-Ore.), who called the decision by Senate Majority Leader Mitch McConnell to recess until Monday unacceptable.

House Democrats took to Twitter to decry their Senate GOP colleagues for abdicating their responsibility to the American people, noting that Republicans found time to vote for a mammoth $740 billion Pentagon budget but failed to approve anything to meet the needs of struggling workers and families.

"Senate Republicans have left Washington without passing the HEROES Act, without proposing their own Covid relief package, and without extending enhanced unemployment benefits for millions," tweeted Rep. Mark Pocan (D-Wis.), co-chair of the Congressional Progressive Caucus. "But they were able to pass a $740 billion defense budget with no trouble."

Rep. Judy Chu (D-Calif.) echoed those concerns and pointed out that the Senate's departure ensures the benefit will run out after next week's claims.

"The cliff is here and Americans are suffering," said Chu.

Progressive groups like Indivisible are urging members to pressure senators to have a vote on the HEROES Act, which Democrats in the House passed in May, as soon as possible.

Filmmaker Michael Moore cautioned lawmakers not to let the unemployment benefits lapse lest the country tip into a total economic mess.

"The magnitude of suffering this is about to cause is so immense," said Moore, "they have no idea of how much shit is gonna hit the fan."